They were in the news a half century ago when they were called “too cheap to meter.”  Now “absolutely safe” nuclear reactors are once again in the news.  As the horrifying scene in Japan unfolds this month, many politicians and media pundits are acting as if the only electricity choice for the U.S. is nuclear reactors or coal power plants.  This is a false choice.

A sustainable economy requires a sustainable energy supply, one that is not subject to the vulnerabilities of big central energy systems.  A steady state economy would run on a decentralized set of renewable energy sources that is clean and resilient.  It would be an economy powered by the sun, the wind, the natural heat content of the Earth, and other renewable sources. Advanced designs for where we live and how we travel would be a key part of this energy transformation. For example, buildings would be designed to generate power rather than requiring external energy supplies for cooling and heating.  And let’s not forget about conservation – we need to set up the economy such that it uses less energy in the first place.

The energy system that would run a steady state economy does not have the severe security problems that plague current systems, nor would it require massive subsidies in the form of liability limits, loan guarantees, externalization of  health damages, etc.  You don’t have to worry about a solar or wind “spill” contaminating the air, land and water; you don’t need liability caps for a wind farm or for solar collectors on roofs; and finally, you don’t need to bill consumers (instead of stockholders or investors) in advance for a nuclear reactor that may never be completed.

The strength and resilience of decentralized power, its superior employment intensity, and the potential for community involvement are all features that make a different energy model very attractive. Various European nations such as Spain, Germany, and Denmark have demonstrated the huge potential of wind and solar power, as has the state of Texas in the case of wind with 9,700 megawatts installed. 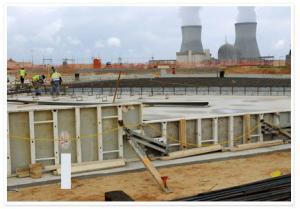 But look at the powerful forces today pushing nuclear reactor construction in the southeastern U.S. and obstructing the clean energy path of the future.  Even after the terrible nuclear meltdown in Japan, two big southern utilities, South Carolina Electric & Gas and Georgia Power, announced that they are not pausing to consider some lessons to be learned before proceeding full speed ahead with four new reactors.  To pay for two new reactors at Plant Vogtle, Georgia Power has begun billing its Georgia customers this month for the intended construction. Ironically, the proposed new reactors being billed to Georgia consumers are intended to supply customers in Florida.  Consumers and taxpayers are bearing all the risks, not investors.

The energy systems used to power the global economy are highly vulnerable to extreme weather events, sabotage, terrorism, and war.  The Japanese catastrophe this month certainly brings to mind the nuclear disasters at Chernobyl in 1986 and Three Mile Island in 1979.  But the nuclear and fossil fuel industries have supplied many less well-known disasters.  A brief  review of some of the accidents will accentuate the difference between the polluting energy of today’s economy and the clean energy future that would, by its very nature, avoid these messes:

Vulnerability lessons are not new.  After World War II German military leaders pointed out that the U.S. could have ended the War two years sooner by bombing the big coal power plants. Instead the allies were bombing individual industrial sites like steel mills, failing to recognize that the big coal plants powered 80% of Germany’s manufacturing.   In contrast, Japan’s electric power was provided by a huge number of small dams that were not attractive targets for attack because no single one was crucial for the power system of the nation.

The energy for a steady state economy can be supplied by a huge number of solar panels and wind mills as outlined by physics professors Jacobson and Delucchi at Stanford University (Scientific American, November, 2009) and by many others.  It would be a refreshing change to see President Obama propose such an ambitious solar/wind plan in the aftermath of the meltdown in Japan, but he seems content merely to suggest a thorough review of nuclear reactors.

Before having to hear how high the costs of renewable energy are, I’ll close with a brief reminder of the government subsidies the U.S. nuclear industry is slated to receive.  Here are some components of the $46 billion being offered up over the next 5 years in addition to the cap on liability for any accident:

Seeing this list of handouts, one might think that Republican leaders would recoil at what might be termed nuclear socialism.  One would think that the Tea Party activists would revolt at the sight of this massive government program to fund something that Wall Street would not touch even before the catastrophe in Japan.

The Errant Economics of Detrimental Dams and Ruined Rivers
3 replies

Fitting the Name to the Named
Scroll to top
$