No surplus, no money. This explains why money originated in regions equally known for the origins of agriculture and predictable food surplus (for example, Mesopotamia, Lydia, and the Yellow River basin of China). It also explains why some of the first records of environmental deterioration come from the exact same regions (most notably Mesopotamia and the Yellow River basin).

The reason, then, for referring to “trophic money” is to keep in mind this trophic structure, and the fact that truly “generating” money entails an ecological footprint. In fact, corollary number one of the trophic theory of money is that the quantity of money—and GDP—indicates the amount of agricultural surplus and related activity at the trophic base of the economy. “Related activity at the trophic base” includes the extractive activities such as mining, logging, and commercial fishing. 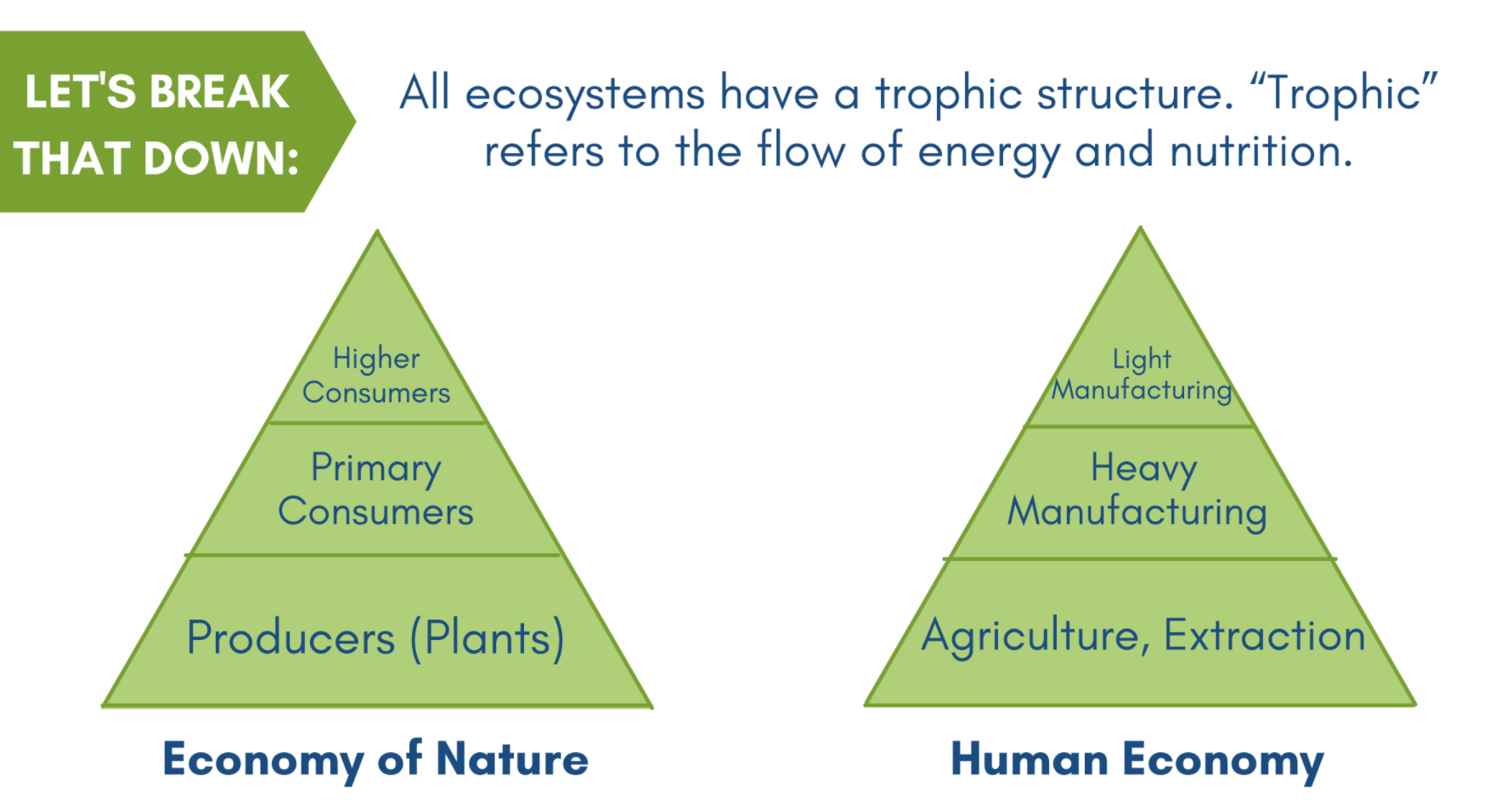 A CASSE infographic on the trophic theory of money.

In other words, GDP is a solid indicator of environmental impact because, as a measure of trophic money spent, it’s a measure of the agricultural/extractive footprint.

The adjective “trophic” trumps “fiat” in the salient sense that all money is and must be trophic money. No money originates in the absence of agricultural surplus, and no money retains value (or even relevance) in such absence.

A Primer on the Philosophy of Taxation

Taxes are commonly used to incentivize or, more directly, disincentivize certain behaviors that society has come to recognize as undesirable, unseemly, or unsafe. Of course, taxes are also used for generating public finance. Alongside the federal budget, the tax code comprises fiscal policy and, in an ideal democratic world, reveals a wealth of information about the values we share.

In the hands of liberal politicians—and as conservatives love to lament—the line becomes blurry between disincentivizing bad behavior and generating money for pet projects. Yet liberals often defend certain taxes (especially on the rich) on the grounds that they will actually spur GDP growth. Liquor sales might contribute to GDP, but an alcoholic public is unproductive. Therefore, the argument goes, we should tax alcohol not only to protect the health of drinkers and the lives of innocents (such as drivers and pedestrians), but also to grow the economy faster! If you’re a steady-state liberal, you’re probably for the former and certainly not for the latter. (If you’re a steady-state conservative, you’re for neither.) 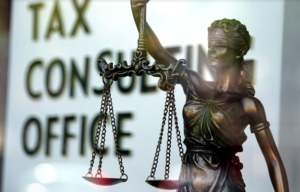 When it comes to the environment, things get a little more complicated. Environmental problems such as pollution and habitat loss are considered “negative externalities.” No one pays the costs of pollution in the market. Rather, we all pay—often with our health—outside of, or “external” to, the market. The costs are diffused, in other words, among the general public, while the polluter accrues all the financial benefits of the polluting activity. Taxes are often prescribed, then, to “internalize” the costs of pollution. A tax on carbon is the most prominent example today.

With Sustainability and Justice for All

Environmental taxes help to rectify the injustice of polluters profiting at the expense of the public. In a nation priding itself in the maintenance of justice, you might expect to see environmental taxes passed left and right. They are not, however, because of a systematic political challenge; the benefits of polluting activities are concentrated while the costs are diffused. Not only that, but the benefits are concentrated in the hands of powerful, lawyered-up corporations while the costs are diffused among a collection of “little guys,” individual citizens.

This “diffused costs, concentrated benefits” policy arena puts corporations and pro-growth interests at a huge advantage. They are motivated to retain their profits and power, fighting against any challenger if need be. Meanwhile, very few of the little guys and gals—busy as they are (often working for powerful corporations)—are motivated to fight for the bit of environmental improvement their efforts might possibly lead to. The little guys aren’t politically stupid, either; most of them realize it will take concerted action by a large number of compadres to make any difference in the activities of the polluting industries.

Furthermore, in many cases of pollution it’s not at all evident how bad the problem is. Hardly anyone knew about the ravages of organochlorines (such as DDT) until scientists at the University of Wisconsin somewhat luckily stumbled into organochlorines as the culprit that nearly extinguished the bald eagle, the peregrine falcon, and other ornithological icons. Similarly today, how many of us have even heard of endocrine disruptors? Maybe you have, thanks to scientists such as the late Theo Colburn (also the founder of TEDX). But, can you spot one in your environment? Can you feel what the lot of them is doing to your nervous system? Can you diagnose your problem and trace the source all the way back to the polluter(s)?

Of course not. Frankly, it takes a whale of an education these days just to keep abreast of the chemical threats to the environment, wildlife, and human health. Who’s got the time and money for that?

It all sounds really unfair, doesn’t it? The fate of posterity might just rest in the hands of highly educated and sincerely motivated little guys and gals who assemble for purposes of constructing class-action lawsuits and lobbying for environmental taxes!

Into the Teeth of the Trophic Conundrum

Alas, even if we succeed in passing a very broad sweep of environmental taxes, we still have a problem. What if those corporations are so driven by revenue that they decide to actually pay all the taxes entailed by their polluting activities? In other words, they are not disincentivized from such activities, but rather incentivized into more such activities simply to pay the taxes without losing net revenue.

And of course, they’ll be paying the taxes in trophic money, as all taxes are, because all money is trophic. Sensing the problem?

Now, let’s consider a less obvious challenge. Let’s say those corporations are indeed disincentivized to some degree, such that their polluting activity declines somewhat. They also have to pay the taxes corresponding with the remaining polluting activity. How do they do that? A smorgasbord of cost-cutting measures might come into play, but that will only get them so far. Chances are these corporations will be incentivized by the tax burden to develop additional product lines or service activities. In other words, they will try to retain or increase the level of profits they had prior to the enactment of the tax. If anything, their economic activity will amount to an even higher level, because now they need the additional income to pay the new tax.

Income, of course, in trophic money.

Through the ecologically clouded lens of neoclassical economics, and with no understanding of trophics, this scenario would be considered a “win-win.” We lessened a pollution problem without impacting profits, and we generated public finance! Yet through the lens of ecological macroeconomics, especially the trophic theory of money, we’ve robbed Peter to pay Paul, probably while polluting just as much, and certainly while being pressured into more agricultural and extractive surplus at the trophic base.

Who’s Peter and who’s Paul? Peter is the polluting industry. While it ended up maintaining its profits, it took a lot of effort, reinvestment, and probably a little luck. Paul is the government, which now has bigger coffers for government expenditure, also known as consumption.

Paul has more trophic money now, while Peter has about the same. The net effect is GDP growth; that is, more environmental impact at the trophic base of the economy.

Why did we probably end up polluting just as much? Because the corporation had to conduct other types of economic activities to compensate for the partial loss of its original activities. So, for example, the corporation isn’t pumping out as many PCBs, but now it’s emitting more greenhouse gases.

Most importantly for our purposes, neither Peter nor Paul can be considered in isolation of the broader economy, its tax code, and its trophic structure. For the economy at large, Peter is essentially the entire supply side; agricultural, extractive, manufacturing, and service sectors all bundled up in their respective trophic levels. Paul is government in the aggregate—federal, state, tribal, local—and is a major contributor to GDP.

With all the production, consumption, and taxes being paid for with trophic money. 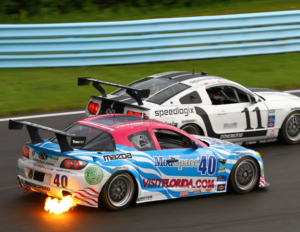 If the tax code is replete with “environmental” taxes that actually stimulate the Peter-Paul complex into even more economic activity—GDP growth in other words—we wind up with less biodiversity, more congestion, higher levels of stress, etc. ad nauseum. We wind up closer to limits to growth, in other words. That’s the trophic conundrum: Levying environmental taxes leads to the environmental impact incurred in the process of generating the (trophic) money to pay the taxes.

I am not saying environmental taxes are always and everywhere a bad idea. If they lead to a substantial reduction of a carcinogen, for example, well, that speaks for itself. Clearly, however, the trophic theory of money poses a challenge for economists to develop some ecological rigor in assessing the marginal benefits of environmental taxes.

Perhaps some taxes will not only disincentivize particular polluting activities, but also tap some brakes on GDP. That would be steady-state fiscal policy. It’s up to economists, ecologists, and ecological economists to identify the conditions under which a tax may serve for brake-tapping purposes, in addition to crimping the stream of a particular pollutant.

We can wish it weren’t true, but all money is trophic money. In lay terms, you can’t buy your way out of environmental impact and limits to growth. You might be able to tax your way closer to a steady state economy, though.

Challenging the Pro-Growth Market: Mark Carney’s Reith Lectures and the Need for a Radical Approach
12 replies

Spaceship Earth and the Alien Economy: More than a Metaphor
Scroll to top
$