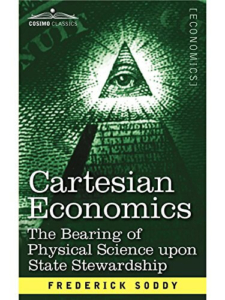 Cartesian Economics: The Bearing of Physical Science upon State Stewardship

He further explained that “[a]lthough it may comfort the lender to think that his wealth still exists somewhere in the form of ‘capital,’ it has been or is being used up by the borrower either in consumption or investment, and no more than food or fuel can it be used again later. Rather it has become debt, an indent on future revenues. . .”[2]

In other words, capital in the financial sense is the perennial net revenue stream expected from the project financed, divided by the assumed rate of interest and multiplied by 100. Rather than magic growth-producing real stuff, it is a hypothetical calculation of the present value of a permanent lien on the future real production of the economy. The fact that the lien can be traded among individuals for real wealth in the present does not change the fact that it is still a lien against the future revenue of society—in a word it is a debt that the future must pay, no matter who owns it or how often it is traded as an asset in the present.

Soddy believed that the ruling passion of our age is to convert wealth into debt in order to derive a permanent future income from it—to convert wealth that perishes into debt that endures, debt that does not rot or rust costs nothing to maintain, and brings in perennial “unearned income,” as both IRS accountants and Marxists accurately call it. No individual could amass the physical requirements sufficient for maintenance during old age, for like manna it would spoil if accumulated much beyond current need. Therefore one must convert one’s non-storable current surplus into a lien on future revenue by letting others consume and invest one’s surplus now in exchange for the right to share in the expected future revenue. But future real physical revenue simply cannot grow as fast as symbolic monetary debt! In Soddy’s words: You cannot permanently pit an absurd human convention, such as the spontaneous increment of debt [compound interest], against the natural law of the spontaneous decrement of wealth [entropy].[3]

Soddy went on to speculate about how historically we came to confuse wealth with debt:

Because formerly ownership of land—which, with the sunshine that falls on it, provides a revenue of wealth—secured, in the form of rent, a share in the annual harvest without labor or service, upon which a cultured and leisured class could permanently establish itself, the age seems to have conceived the preposterous notion that money, which can buy land, must therefore itself have the same revenue-producing power. [4] 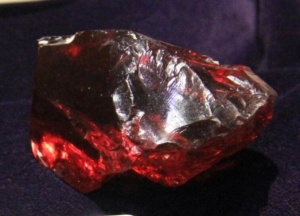 Economic alchemists envision a philosopher’s stone where capital or debt is free from the ravages of time and entropy. (Image: CC0, Credit: Karen Roe).

The ancient alchemists wanted to transmute corrosion-prone base metals into permanent, non-corruptible, time-resistant gold. Modern economic alchemists want to convert spoiling, rusting, and depleting wealth into a magic substance better than gold—not only does it resist corrosion, but it grows—by some mysterious principle the alchemists referred to as the “vegetative property of metals.” The modern alchemical philosopher’s stone, known as “capital” or “debt,” is not only free from the ravages of time and entropy but embodies the alchemists’ long-sought-for principle of vegetative growth of metals. But once we replace alchemy with chemistry we find that the idea that future people can live off the interest of their mutual indebtedness is just another perpetual motion delusion.

The exponentially growing indent of debt on future real revenue will, in a finite and entropic world, become greater than future producers are either willing or able to transfer to owners of the debt. Debt will be repudiated either by inflation, bankruptcy, or confiscation, likely leading to serious violence. This prospect of violence especially bothered Soddy because, as the discoverer of the existence of isotopes, he had contributed substantially to the theory of atomic structure that made atomic energy feasible. He predicted in 1926 that the first fruit of this discovery would be a bomb of unprecedented power. He lived to see his prediction come true. Removing the economic causes of conflict, therefore, became for him a kind of redeeming priority.

Economists have ignored Soddy for 80 years—after all, he only got the Nobel Prize in Chemistry, not the more alchemical “Swedish Riksbank Memorial Prize for Economics in Honor of Alfred Nobel.”

Might As Well Face It, We’re Addicted to Growth

Limits to Growth – of Stuff, Value, and GDP
Scroll to top
$