The talking heads in the media explain the recent fall in the stock market as follows:

A fall in unemployment leads to a tight labor market and the prospect of wage increases; wage increase leads to the threat of inflation; which leads the Fed to likely raise interest rates; which would lead to less borrowing, and to less investment in stocks, and consequently to an expected fall in stock prices. Therefore investors (speculators) rush to sell before the expected fall in stock prices happens, bringing about the very fall expected. So, the implicit conclusion is that rising wages of the bottom 90 percent are bad for “the economy,” while an increase in the unearned incomes (lightly taxed capital gains) of the top ten percent is good for “the economy.” The financial news readers of the corporate media avoid making that grotesque conclusion explicit, but it is implicit in their explanation. 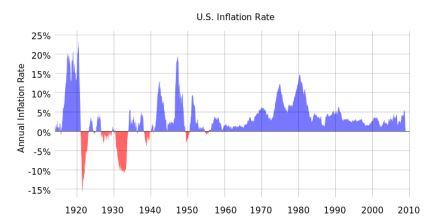 A wage increase, in addition to cutting into profits, is considered inflationary, and that leads the Fed to raise interest rates and choke off the new money feeding the stock market boom and related growth euphoria. But higher interest rates serve other functions, most notably to keep capital from being wasted on uneconomic projects that are financially lucrative only at zero or negative interest rates. Furthermore, positive interest rates reward savers provide for retirement and emergencies and even reduce the inflationary effect of consumer spending.

As long as officially measured inflation is low the Fed can keep on pushing money into the economy to finance the asset boom. But why, with so much added money has there apparently been so little measured inflation? In truth, there has been a lot of inflation, but it has simply not been measured by the Consumer Price Index (CPI). Why is that? Because the new money is borrowed into existence by investors who use it mainly to buy existing assets (stocks, bonds, real estate, art, crypto-currencies, etc.). The price of assets goes up; we have asset price inflation, but asset prices are not part of the CPI and go uncounted. Inflation occurs in asset prices rather than in consumer goods prices, leading to boom and bust cycles.

Some inflationary pressure spills into the goods markets but does not register directly as a price increase and thus goes uncounted. Examples are numerous. At the supermarket the price stays the same while the box of raisins gets smaller, the block of cheese shrinks, the cup of yogurt is less full, the self-checkout line becomes the only option, etc. Airfares may not go up, but seat space declines; “miles” become ever more difficult to redeem, and quality of service becomes aggressively bad. Everywhere customer service declines as recorded “answers” replace real people (“your call is important to us—please stay on the line”). Our premier newspaper, The New York Times, may not raise its price, but it repeats the identical articles over and over after day and in various sections of the same edition. The price to watch network TV is to endure the commercials, which keep getting longer and louder. In sum, quantitative easing has resulted in unmeasured inflation, mainly in the asset market, but also in the consumer goods market. 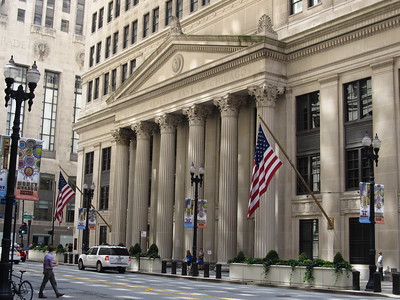 Federal banks are meant to serve the public, yet member banks hold stocks in them. How can we hold the Fed accountable as an independent entity? (Image: CC BY-SA 2.0, Credit: Ken Lund)

Economists at the Fed are not stupid—they know this. Why then do they not correctly measure inflation and stop quantitative easing and the resulting zero (or even negative) interest rates? Because the increase of asset prices benefits the asset owners, the rich, while the smaller rise in the undercounted CPI hurts mainly the poor. Also, under our fractional reserve banking system, new money (interest-bearing private debt) must be loaned into existence, and banks lend to those with collateral, those at the top. In a sovereign money system, the new money (non-interest-bearing public debt) could be spent by the Treasury into the economy at the bottom to finance public goods and real production and employment (for an explanation of sovereign money, see Positive Money). Giving private banks the right to create money, as does our fractional reserve system (that no one ever voted for), is a giant subsidy to the private banking sector. Incidentally, the Fed is owned by these member banks who profit from excessive money creation, even though it is supposed to act independently in the public interest.

Conflict of Interest at the U.S. Fish and Wildlife Service? A Deal Some Couldn’t...
Scroll to top
$