On April 22-23, finance ministers from the G-20 countries will be meeting to tweak the international system of finance. They are planning to discuss how to regulate the financial industry and prevent future financial collapses. Perhaps they will make some progress, but they won’t get it right until they gain a better understanding of how money works. The G-20 ministers would do well to invite the authors of the following two quotes:

1. We know that unlimited growth in a finite world may eventually lead to ecosystem collapse, but the framework of our modern economic system depends upon the assumption of exactly that – unlimited growth.

2. The inevitability of our planet’s ecological limits means that the choices before companies are not about whether they care for the environment, but about the substance and relevance of what they are doing. Dealing with limited ecological capacity is arguably the most important business challenge facing companies in the 21st century.

These aren’t the quotes of a renegade economist, exiled from a neoliberal university department, and they are not quotes from a starry-eyed activist railing against “the man.” These quotes actually appear in the introductory material of shareholder reports for a global mutual fund. Leslie Christian and Carsten Henningsen, co-founders of Portfolio 21, are the authors.

The fact that mutual fund managers wrote these quotes is quite fascinating. It seems almost paradoxical, since their job is to generate returns for customers. No mutual fund can long survive if the companies in the fund’s portfolio aren’t growing (or at least expected to grow). Christian and Henningsen accept the ultimate truth that unending growth is a myth, and they are not afraid to level with their clients and recognize that Portfolio 21 will change over time.

If the G-20 ministers want to reform the complex and failing financial system at the national and global scale to make it more dependable and more consistent with long-term ecological health, they will need advice from keen thinkers like Christian and Henningsen. What is it about money that the finance ministers need to understand? They, like the majority of citizens, are operating from an incomplete mental model of how money works. Most of us already understand that it’s good to have some money in our pockets. Money gives us access to necessities and comforts. If we have it, we can get the things we need and want for ourselves and our families. That’s quite an incentive for us to make sure we have enough money, and even an incentive to make sure we have more than enough. Most of us also understand that money translates into power. The more of it we have, the more influence we can wield on the world around us. Taken to the extreme, a large corporation or government with truckloads of money can remove entire mountains, launch spacecraft, or deploy an army. Those are well understood characteristics of money, but there is one simple and critical feature of money – a feature with wide-ranging implications – that we have largely forgotten.

Money is not real wealth, but rather a claim on wealth or COW. Real wealth takes the form of housing, land with good soil, medical care, dinner, computers — actual goods and services that provide value. Money itself has no authentic value, except that we accept it as a COW. Money is akin to a concert ticket. The only reason anyone wants a ticket is to gain access to the concert. Just as the ticket is redeemable for a concert-going experience, money is redeemable for real wealth. Having hundreds or millions or billions of concert tickets is only valuable if you can attend hundreds or millions or billions of concerts. The same concept applies to money. The only reason anyone wants a wad of money is to be able to exchange it for a bundle of goods and services. 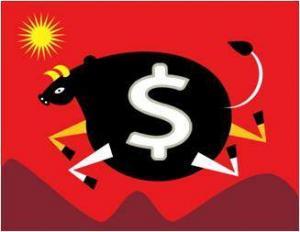 How large can our COWs grow?

This feature of money doesn’t pose a problem unless we have unrealistic expectations for money (COWs). Unfortunately it appears that we have indeed strayed from reality — we expect money to grow exponentially through the magic of compounding interest. When people and institutions make investments (e.g., an employee investing in a pension fund, a bank providing a home mortgage loan, or a mutual fund manager buying corporate stocks), they anticipate a return on their investments. They assume that they will recoup their investment plus interest, subject to some amount of risk. We have also come to expect additional returns when we re-invest our original earnings. It has become altogether commonplace – part of the institutional framework of money — to assume compounding interest and exponential growth. Our COWs are not subject to any physical or ecological laws. Money in a bank account can increase as high as we can count, but what about the stuff it can buy? Can we exponentially increase the amount of stuff we produce and consume? How long can real wealth, which is certainly subject to the laws of physics and ecology, continue to increase the way our COWs do?

There are two big and disconcerting implications of this disconnect between the way real wealth can grow and the way our COWs can grow. The first is that prices can be set by individuals or a collection of individuals in a market without considering ecological limits. Many economists over the years have claimed that we don’t need to worry about environmental problems as long as we get the prices right. They say the reason our roads are congested is that the price of driving is too cheap; the reason we are misallocating precious water resources is that the price of water is too low; the reason the housing market crashed is that price of houses was too high… Experience has shown, however, that both the market and government regulators all too often fail to get the prices right. If achieving ecological sustainability were a simple matter of getting the prices right, we would have done so years ago.

The second implication is that economists and politicians have become downright obsessed with growing real wealth to keep pace with the growth of our COWs. Doing so (by encouraging national economic growth rates of about 3% per year) prevents the financial system from collapsing (at least until we hit the limits on expansion of real wealth), ensures there are enough jobs to go around, and prevents us from tackling the tough task of distributing wealth. This last point about wealth distribution may be the key. If wealth is always increasing, then there’s no need to divide it up equitably – everyone can get a piece of the expanding pie. The problem is that the planet isn’t set up to provide an ever-expanding pie. Plenty of evidence suggests that even with our growth obsession, we can’t keep the growth going. We’re bumping up against profound limits. The litany of ecological breakdowns, from species extinctions to climate instability to desertification, is clearly confirmed in a mass of peer-reviewed research.

There are no easy solutions to bridging the gulf between our stocks of real wealth and our exponentially growing COWs. The very first step is for citizens (especially the G-20 finance ministers) to appreciate the difference between wealth and COWs. Only then can we begin to institute real changes to our economic framework and financial system. If we are to make a paradigm shift — a shift from mindless pursuit of perpetual growth to an economy that persists within the physical and ecological bounds of the planet, a shift from wishful thinking to perceptive and reality-based decisions – we will need to fence in our COWs.

Peace, Love, and the Gift
11 replies

Make It Forty-Four Shades of Green

Money and the Steady State Economy
Scroll to top
$