This summer, my CASSE blog featured the pending Iraq War III and argued that a steady state, true-cost, sustainable economy cannot be achieved if the US in going to engage in perpetual warfare over Middle East oil. The wars in Iraq have cost trillions in the name of national security—trillions that could have been spent on putting the US on a clean energy basis, including electric cars charged by solar and other renewable sources.

I want to raise some questions about Obama’s new war to deal with the Islamic State (or ISIS or ISIL, depending on the news outlet). Question 1: Does ISIS pose a low, medium, or high security risk? If the answer is low, then it is difficult to see the basis for launching a new war. Suppose that the risk is medium or high; then a person might wonder how we as a nation just spent trillions on a decade-long Iraq war at the end of which we have a medium to high security problem. Question 2: Who would want to put money into another such inept endeavor whose result achieves the very opposite of what the public was told was the purpose? In reality, the prime objective of the Iraq wars centers on oil.

In terms of war and national security, a much more serious long-term threat is that of climate wars. Money being spent on oil wars ought to be shifted to strategies to prevent climate wars by getting at the root causes of climate disruption.

In his book Collapse, Jared Diamond examines the environmental factors contributing to the collapse of advanced societies around the world, such as the Mayans in Central America and the Polynesians on Easter Island. The Mayans had a calendar dating back to 3114 B.C., built magnificent temples, and did sophisticated astronomy. But their population grew to an estimated 5 million, well beyond what the land could sustain, while huge amounts of resources were spent by chiefs trying to surpass other chiefs in building even bigger monuments. The leadership continued to misjudge the land stewardship and the food resource needs, and as a result several smaller collapses occurred before a large collapse around 900 AD, due in part to a severe drought. When Spaniards reached Mayan territory after 1500 AD, the temples had been abandoned and the Mayans scattered. 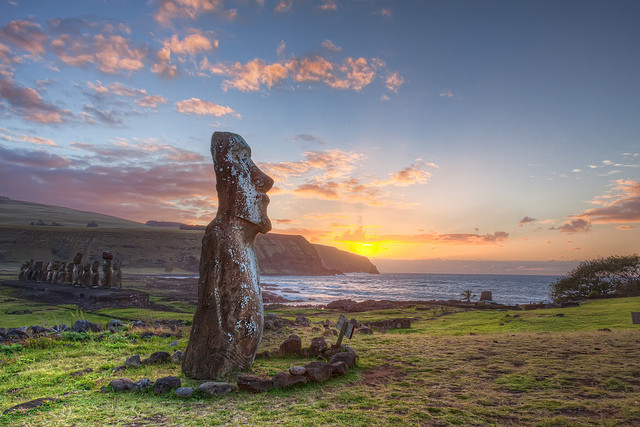 As we fail to adequately address climate change and its root cause, will our society face a similar collapse? Photo Credit: Christian Bobadilla

The peoples settling the isolated Easter Island around 900 AD met a similar fate after several hundred years of expanding their population and quarrying gigantic stone statues (weighing up to 270 tonnes) which they then moved to the perimeter of the island. They deforested the island and the surrounding waters filled with silt, while at the same time vast energies were occupied on rivalries over which clan could build the biggest stone head. When Captain Cook arrived at the island in 1774, he found a tiny population (down perhaps from a peak of 20,000) that he described as “small, lean, timid, and miserable.” The civilization had collapsed in a cannibalistic endgame.

Common causal factors include population growth beyond the capacity of the land to support it, destruction of good farmland, and the use of resources in tribal conflict and monument building. Leadership in both societies failed to respond to the handwriting on the wall.

There is an eerie resemblance to the actions of the United States in spending trillions on wars to secure oil supplies instead of investing in a clean energy economy. Germany, in contrast, put over $100 billion into solar and wind energy installations and became for a while the number one country in both solar and wind. Today, Germany (about the size of Montana) has triple the roof-top solar (36,000 MW) of the U.S., even though its physical area is small by comparison with the lower 48 states.

We are looking at a “perfect storm” of conditions around the world that will lead to major conflicts and wars: growing populations, reduced food resource base, destruction of fisheries with dead zones and acidification, enormous deforestation, and the like.

Already we see serious problems with ecological refugees trying to escape unlivable conditions in their homelands and get to Europe or North America. In Asia, India is building a huge fence along its border with Bangladesh, fearing massive fluxes of refugees as Bangladesh gets swamped by sea level rise and major storms.

In Climate Wars, Harald Welzer writes “nearly all academic studies, models and prognoses regarding the phenomena and consequences of climate change have been in the natural sciences” whereas “such things as social breakdown, resource conflict, mass migration, safety threats, widespread fears, radicalization and militarized or violence-governed economies” fall directly in the purview of the social sciences. Those in the natural sciences generally do not have knowledge or capability of fashioning solutions that involve key aspects of human behavior and motivation.

The same concerns arise as we try to move toward a steady state, true-cost economy: we need expertise from the social sciences.