With the introduction of Canada’s so-called “secret police” bill, there is increasing concern the rights of the oil patch will trump the rights of ordinary citizens in a new and chilling way–through the kinds of fear tactics you’d sooner expect in Soviet Russia than a western liberal democracy.

Bill C-51 would give Canadian national security and intelligence forces the right to monitor ordinary citizens, and even detain them for up to seven days at a time if they are perceived to “interfere with the economic or financial stability of Canada or with the country’s critical infrastructure.” This includes what the government has branded the “anti-petroleum” movement, whose participants have been labelled ‘extremists’ by the Prime Minister and Royal Canadian Mounted Police (RCMP). The legislation would subject environmental activists to increased surveillance and intimidation under the guise of preventing terrorism. I wonder how, exactly, a government with strong ties to the oil patch will define ‘economic or financial stability.’

The truly chilling development as a result of Bill C-51 is that a citizen doesn’t have to actually organize a demonstration to trigger the use of new powers. Under this legislation, the agency simply has to suspect that you might do something that interferes with ‘critical infrastructure’ in order to monitor you or pay you a visit.

By stifling free speech and democratic engagement, this effort demonstrates just how far some will go in order to cling to an aging growth-at-all-costs narrative–absurdly pitting human beings against one another and against the planet itself. At worst, this is carbon-fuelled neoliberal fanaticism disguised as pragmatic politics, given that the oil sands contribute about 2% to Canada’s GDP.

I’m not bothered by the notion of confronting terrorism, if that were indeed the explicit purpose of Bill C-51. To confront a problem as complex as terrorism, new techniques need to be adopted to monitor communication activities. But strong monitoring requires strong and transparent oversight, particularly if environmental activists can so casually be described as ‘deliberate threats,’ if not terrorists. And while the Canadian Charter of Rights and Freedoms should prevail in the courts, it’s the lack of oversight that has former legislators and judiciary officials concerned that the courts won’t be able to intervene quickly enough if the security officials go too far. 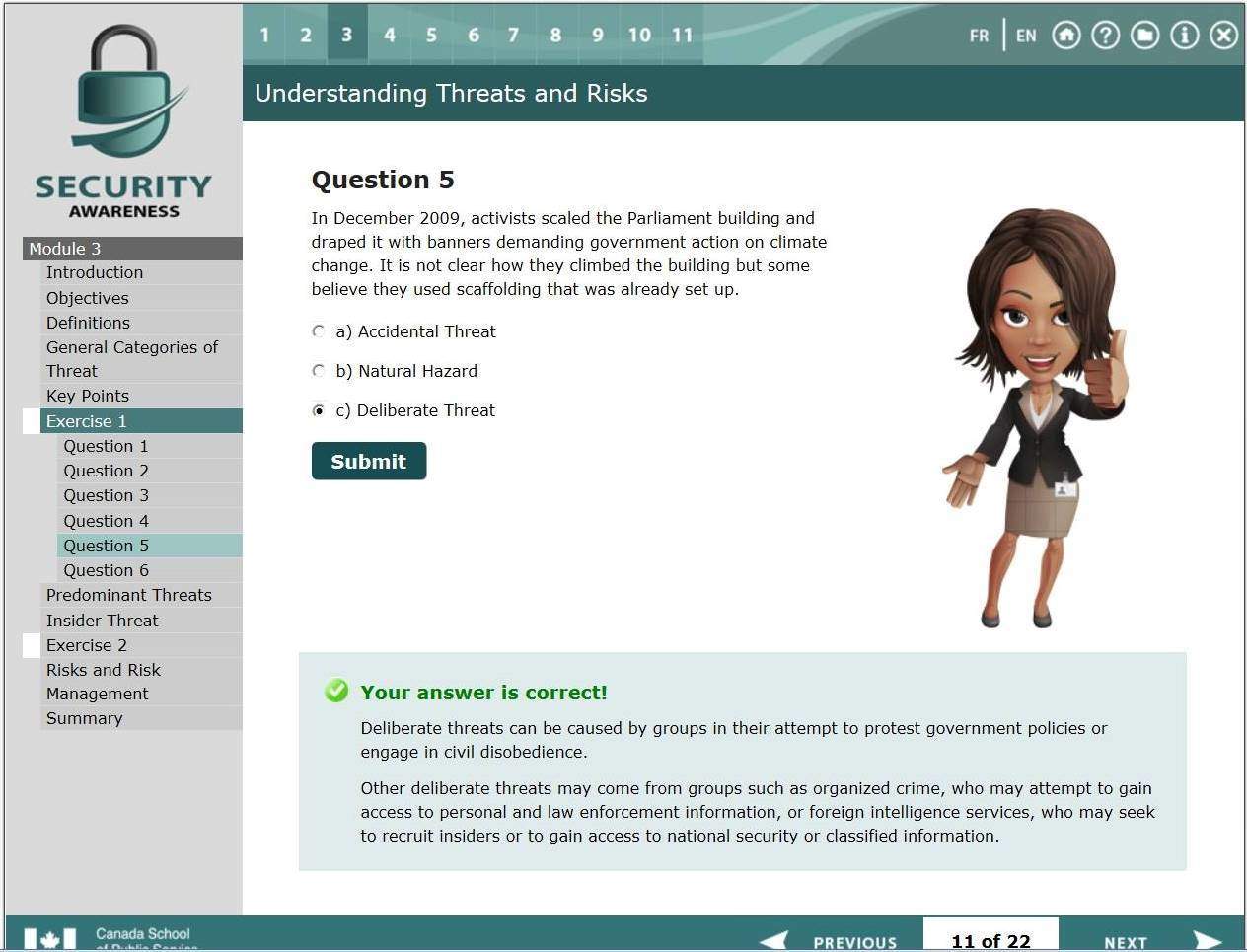 This screenshot comes from the Facebook page of Andrew Weaver, MLA for Oak Bay-Gordon Head, and was originally captured from the Government of Canada’s new online training course entitled ‘Security Awareness,’ which is being offered by the Canada School of Public Service.

In a show of virtually unprecedented solidarity, a handful of former prime ministers, solicitors general, and Supreme Court justices published a joint statement in a national newspaper last week. They believe this bill represents a decline into underhanded abuse and excessive state intrusion. Already, Canada’s tax agency has been used to spy on Canadian environmental organizations and citizens in what is apparently a coordinated effort between oil companies, the National Energy Board, the RCMP, and Canadian Security Intelligence Services (CSIS). One editorial describes the changes in tax laws as a “dishonourable attack meant to intimidate environmental groups.” These incremental changes have prompted Edward Snowden and Ralph Nader to chime in and issue their own warnings.

Do our elected officials believe it’s acceptable to stifle dissent in a democracy through the use of fear? Are they actually as afraid of extremists who behead others as they are of environmentalists who challenge old conceptions of economic justice? Or is Prime Minister Harper, trained by the University of Calgary as a neoclassical economist, so beholden to the narrative of carbon-intensive growth, that he believes it should undermine the bedrock of a just society–our freedoms and right to self-expression? A functioning democracy requires dissent so citizens can hold their leaders accountable when they go too far.

I hope this is all simply a sick intimidation exercise, because if Bill C-51 actually represents the erosion of our fundamental freedoms in the name of carbon-intensive growth, this could very well signal the beginning of a dark time. Peaceful resistance to burning fossil fuels cannot be futile.

I should clarify that I’m not just embodying the voice of the left wing fringe in Canada. In fact, I happen to believe the principles of a steady state economy–an economy that is truly economically stable–is fully coherent with traditional ‘conservative’ values. Former conservative Prime Minister Joe Clark is one of the leading voices cautioning against allowing national security services to administer justice without proper oversight. As he mentioned, the problem is that secret police services perform “in the shadows,” and can destroy lives by allowing suspicion to run rampant before the appropriate checks and balances can be applied in the courts. C-51, he argues, could be more damaging than no bill at all.

The only thing that would be more disturbing than the idea that our government believes these actions are just, is the prospect that Canadians might be too afraid and passive to challenge this bill. Perhaps we adore our oppressors more than we ought to. And by oppressors, I’m not just referring to the authors and supporters of C-51. I’m talking about our own propensity to consume and accumulate ad nausem, amusing ourselves to death as our civil liberties are eroded in plain sight.

So let’s hope all this talk of secret police is indeed exaggerated. While some environmentalists may feel afraid and needlessly manipulated, others will speak out and shame Canada on the international stage. If this whole charade becomes too absurd, some of us may even consider moving to Denmark, or Germany, where more sophisticated governments have chosen to confront a challenging future with foresight rather than intimidation.

Or more optimistically, maybe we can see this as a promising step on the road to real change. Arthur Schopenhauer said that “all truth passes through three stages. First, it is ridiculed. Second, it is violently opposed. Third, it is accepted as being self-evident.” Perhaps we have arrived at stage two, with the government playing the role of the violent opposition. If so, I look forward to stage three–acceptance–being right around the corner.

Potential New Allies in the Effort to Achieve a Sustainable True Cost Econo...

Adjusting the Fifth to a Finite Planet, Part II
Scroll to top
$