I’ve recently returned from France’s first high-level “beyond growth” event, entitled An Innovative Society for the 21st Century. The conference, which included five separate sessions for the 250 or so attendees, was officially sponsored by François Hollande, President of the French Republic. It is one of only a handful of events that has received official government support for the topic of building a post-growth economy. The event was organised by IDDRI, the Institute for Sustainable Development and International Relations, and was held in one of the historic buildings of the French National Assembly.

A number of politicians spoke at the event, including Claude Bartolone, the President of the National Assembly, who gave the opening address. Mr. Bartolone was more to the point than I was expecting and seemed to accept the end of the era of economic growth in France. He was careful to say that low growth does not mean an end to progress, and that the “social economy” could provide answers to the problems that we face. He made the particularly strong statement that “we can accept a 4 percent deficit, but we cannot accept 4 degrees of global warming”. To close, he said that “we must invent the world we want, starting now”.

The session that followed, entitled “Have our models of growth entered into an exhaustion phase?”, included talks by both Nicholas Stern (author of The Stern Review) and Andrew Simms (the unofficial ambassador of the New Economics Foundation). Stern opened by saying that he was not going to talk about “growth indefinitely”, because — in the words of Woody Allen — “eternity is a very long time, especially towards the end”. He did, however, say that he believed growth is needed over the next twenty to thirty years to drive investment and innovation to avoid climate change.

Stern’s reasoning was challenged by Andrew Simms, who provided one of the liveliest talks of the event. He emphasised that relying on economic growth to solve our problems is not a scientifically credible strategy due to the multiple planetary boundaries that we face. Simms also highlighted the diminishing social returns of growth, and the appearance of “jobless, voiceless, and futureless growth”. He likened our situation to a man falling from a 100-storey building. The man will pass the first 99 storeys unscathed, and may become increasingly confident about his predicament, until he passes the final floor and his fall is abruptly ended. In closing, Simms suggested that economic policy should pass three tests: Does it reduce the pressure that we put on the environment? Does it make society more equal? And does it contribute to human well-being?

The second panel of the day moved on to ask the question, “Can we build a post-growth society?” The first speaker was Laurent Baumel, a French MP and member of the governing Socialist Party. He said it was useful to question the need for growth, and to challenge GDP as a measure of progress. However, he claimed that growth still remains necessary for the functioning of society. He seemed particularly concerned about what a lack of growth would mean for the government’s ability to reduce inequality and fight unemployment. 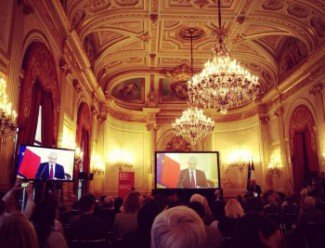 Baumel’s talk was followed by my own contribution, in which I described some of the policy changes needed to achieve a prosperous economy without growth (ideas that are discussed in Enough Is Enough). I pointed to the weak relationship between economic growth and the level of employment and to the ways that greater equality may act as a substitute for growth. I also discussed the importance of financial reform, in particular the need for a full-reserve banking system. Finally, I stressed that the goal of a steady-state economy is not zero GDP growth. The goal is to achieve a high quality of life for all people within ecological limits, something that GDP can’t possibly measure.

My talk was followed by a contribution from Jean Pisani-Ferry, the director of the French Prime Minister’s economic policy planning staff. Pisani-Ferry claimed that a post-growth perspective was “fatalistic and Malthusian”, but did not respond to any of the policy proposals that I made, despite an attempt from the chair to get his opinion on these issues. Instead, he focused on the price system and the need to invest in low-carbon infrastructure while interest rates remain low.

The final speaker of the session, the former Swedish Environment Minister Lena Sommestad, emphasised the role of human capital and the need to invest in social programs. She made the important point that more equal societies are better at dealing with environmental problems like climate change.

The next two sessions focussed less on growth and more on social innovation, and I did not find them as engaging overall. One exception was a talk by Rob Hopkins, founder of the Transition Towns movement. Hopkins discussed what a bottom-up response to the challenges of a post-growth society might look like, drawing on examples from the Transition movement. He stressed that the main reason people are engaging in Transition projects is not the environmental benefit of these projects, but the social connections and greater sense of community that people gain from them.

The final session of the conference, which was entitled “What development model for the 21st Century?”, included contributions from Pascal Canfin (the French Deputy Minister for Development), George Papandreou, (the former Prime Minister of Greece), and Jeffrey Sachs (the well-known economist from Columbia University).

To my surprise, Sachs led with what was probably the most direct criticism of the pursuit of growth at the conference. He said that it’s a hard reality to accept, but growth is no longer a viable strategy for the planet, and politicians need to accept this. He said that even the notion of allowing developing countries to “catch up” before beginning the transition to a new development model is unrealistic. Instead, he emphasised that all countries need to pursue a new model of development, and not just “follow the one in front”. He was also the only speaker to raise the issue of the need to stabilise global population.

The strong speeches continued with George Papandreou, the former Prime Minister of Greece. Papandreou suggested that the collective response of policy makers to the Greek deficit, Lisbon Treaty, and Copenhagen Climate Change Conference had been wrong. These issues were dealt with separately, he lamented, when they should have been addressed together. He claimed that the Greek government had borrowed unsustainably in the name of increasing GDP, and the result was recession, unemployment, a democratic crisis, and no progress on climate change. He said that the financial crisis had happened too quickly for the political system to deal with, and that too much power now rested with institutions beyond national boundaries. He also said that politics had become unpopular and the trust of citizens had been lost, which made it difficult to implement big changes. Much like proponents of degrowth, he advocated a deepening of democracy as the solution. Finally, Papandreou suggested we need new indicators and new values, and that “maybe happiness is more important than GDP”.

Although the conference was high on rhetoric and low on solutions at times, I still believe it was a success. For the first time, politicians and researchers were discussing the possibility of a post-growth economy in the halls of the French National Assembly — no small achievement. It was clear from who was present, however, that the idea of a prosperous non-growing economy still resonates more with the left than the right. Moreover, it seemed like there were quite a few former left-wing parliamentarians offering their support. A more cynical person might question whether they would still do so if returned to power!

Nevertheless, as I was saying my goodbyes on the stairs of the National Assembly, Damien Demailly, the head of IDDRI’s New Prosperity program assured me, “This is only the beginning”.

Dan O’Neill is the coauthor of Enough Is Enough: Building a Sustainable Economy in a World of Finite Resources.  He is also a lecturer in ecological economics at the University of Leeds and the chief economist for the Center for the Advancement of the Steady State Economy.