“You never change things by fighting the existing reality. To change something, build a new model that makes the existing model obsolete.” –Buckminister Fuller

We live in the age of ecocide. Defined as the extensive damage, destruction or loss of ecosystems of a given territory, ecocide is the result of the way people, corporations, and governments are running their affairs all around the globe. But ecocide doesn’t have to be the status quo. A new law being proposed in the European Union would protect ecosystems by giving them legal standing. Under such a law, the Earth would no longer exist purely as property or a set of resources to be exploited. Instead people and institutions would acknowledge the intrinsic value of ecosystems and accept the legal duty to protect them.

Ending ecocide requires nothing short of a paradigm shift. This shift, in turn, requires a cultural change — a movement away from exploitation and toward stewardship of nature. The cultural shift is unfolding as people, especially the younger generation, internalize the evidence of ecocide and its devastating consequences constantly being issued in reports about global warming, species extinctions, and natural resource depletion. But we need more than just a cultural shift. We need specific and revolutionary changes in two subsystems of society: the legal framework and the economy.

The Legal Shift to End Ecocide

The concept of ecocide has been discussed since the 1950s, and it has even been codified as a war crime. According to Article 8.2 of the Rome Statute of the International Criminal Court, it is illegal to cause “widespread, long-term and severe damage to the natural environment” in acts of war. But the same damage caused in peacetime is legal. In 2010, building on a history of attempts to criminalize ecocide, Polly Higgins submitted a proposal to the United Nations to include ecocide as the Fifth Crime Against Peace.

At the core of the law of ecocide prevention is the idea that decision-makers in business and politics should be held personally and criminally liable for damages caused to the environment. Contrary to the existing system in which fines often fail to cover the cost of cleanup, companies and decision-makers under the law of ecocide prevention would be held criminally accountable and would have to pay the costs of restoring ecosystems to the extent possible.

Today many laws and regulations are in place to protect certain parts of the natural environment, such as soil, water, and endangered species. However, existing legislation treats each of these elements separately, fragmenting the overall body of environmental law. In contrast, the law of ecocide prevention takes a holistic approach by establishing a broad framework for conserving ecosystems and the services they provide.

The main aim of this legislation is not the imprisonment of decision-makers but the creation of incentives and a legal framework for achieving environmentally sound behavior, especially within corporations. Imagine all investments flowing into non-ecocidal activities and the resultant innovations driven by resource efficiency and waste minimization. With strict enforcement, businesses would make the necessary adjustments to comply with the new legal framework. If accompanied by subsidies to facilitate the transition to a new business model, the law of ecocide prevention has the potential to trigger a transition to a different sort of economy — one that operates in harmony with the ecosystem.

The Economic Shift to End Ecocide 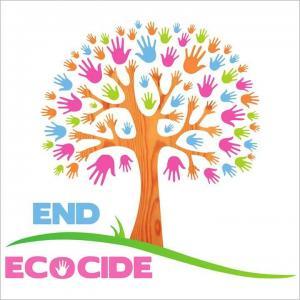 The economic goal of continuous growth sets the stage for ecocide. With their primary focus on more and more growth, businesses contribute to the global environmental catastrophe by externalizing the environmental costs of their profit-maximizing actions. As moral philosopher Michael Sandel puts it, we have moved from a market economy that is valuable for organizing productive activity to a market society where everything is up for sale. The problem with a market society is that it corrodes or crowds out important, non-market-based values and de-emphasizes public goods at a time when inequality is dramatically rising.

Instead of a growth-obsessed economy focused on maximizing profits and producing more and more goods and services, we need a steady state economy focused on maximizing well-being and producing sufficient goods and services within ecological boundaries. As described by Herman Daly, a steady state economy uses the “lowest feasible flows of matter and energy from the first stage of production to the last stage of consumption.” The idea is to maintain a non-growing throughput of low-entropy resources and energy through the economy. In short, instead of getting bigger, the focus shifts to getting better.

We may have already arrived at a major economic inflection point. The rate of global economic growth is decreasing, and some economists are discussing whether we have reached the end of economic growth and the limits of global capitalism. 2008 marked the beginning of the most severe economic crisis since the Great Depression. With the old system failing, there is potential for the North and eventually the South to make the turn toward a steady state economy that is based on the principles of sustainable development.

Even though the old system of continuous growth is failing, we need to create the conditions for a steady state economy to emerge. Unfortunately, the principles of sustainable development are mostly missing from today’s environmental law and policy. That’s why the steady state economy goes hand in hand with the law of ecocide prevention. It’s exactly the kind of economy that will materialize when businesses are legally bound to protect ecosystems.

The law of ecocide prevention and the steady state economy constitute two paradigm shifts, a legal and an economic one. These two shifts reinforce one another and move society in the same direction — placing people and planet ahead of profit. But how can people who recognize the necessity of this two-pronged shift help make it happen?

A group of volunteers has proposed a law to the European Union to make ecocide a crime if it is committed in EU territory, or by companies registered in the EU, or by EU citizens. The proposed legislation would also apply to the import of any goods or services resulting from activities causing ecocide in the EU and the financing of ecocide by EU banks or financial institutions. If one million EU citizens support this proposal by January 21st, 2014, the European Commission will be legally bound to propose an action. We would like to invite EU citizens to vote today for a law to protect our future. Ecocidal tendencies have no place in either our legal or our economic institutions.

Amelia Womack, Villo Lelkes and Prisca Merz are volunteers for End Ecocide, a European citizens initiative aiming to criminalize ecocide. They need to collect 1 million signatures for a law to be considered by the EU. Amelia is a Green Party candidate for the European Parliament and has completed a MSc in environmental technology — her thesis addressed the impact of the law of ecocide prevention on business. Villo is an environmental lawyer who previously worked for the European Commission as a policy officer on sustainability. Prisca has a background in public policy and human development and heads the End Ecocide team as a volunteer.

Five Christmas Gifts that Keep on Giving
Scroll to top
$