Extremely dangerous political rhetoric has proliferated over the past several decades, seducing the masses onto a path that leads to the destruction of nature and civilization. This rhetoric is centered on the claim that “there is no conflict between growing the economy and protecting the environment!” Politicians are all about economic growth but, at the same time, none of them want to be seen as willful destroyers of the environment. Therefore they stretch, warp, and corrupt the truth with the win-win rhetoric that we can have our cake and eat it too.

Such is the world that CASSE—the Center for the Advancement of the Steady State Economy—was born into on May 1, 2004. In fact, the win-win rhetoric about growing the economy while protecting the environment was the primary impetus for establishing CASSE. The CASSE position on economic growth sets the record straight that “there is a fundamental conflict between economic growth and environmental protection,” leading up to this fact with seven “whereas” clauses and following it with eight other “therefore” findings.

Those having a counter-reaction that “there doesn’t have to be a conflict; it’s not a fundamental conflict” should read the full CASSE position. The fundamentality of the conflict between economic growth and environmental protection stems from the first two laws of thermodynamics. “Laws of thermodynamics” might sound intimidating to the uninitiated, yet the first two laws can be summarized in such common-sensical terms as: Law 1) You can’t get something from nothing; Law 2) You can’t be 100% efficient in the production process. These laws set up a limit to economic growth, as well as the fundamental conflict between economic growth and environmental protection, as evidenced most clearly by the erosion of biodiversity in lockstep with economic growth. 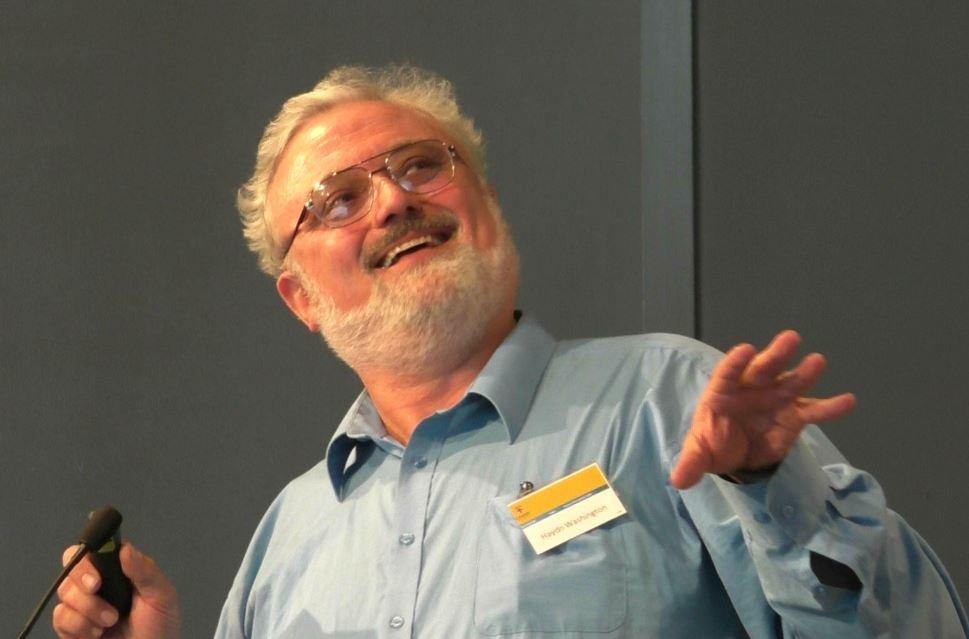 Haydn Washington, co-editor of A Future Beyond Growth and co-director of the NSW chapter of CASSE, speaking at the Australian Academy of Science’s 2014 Fenner Conference on the Environment. (Credit: Anna Schlunke)

So read the CASSE position, and read this book. While the relationship between economic growth and environmental protection is not an overly simple matter, the key points are readily grasped by sober readers, with the benefit of a clearly written book such as A Future Beyond Growth.

Among the 13,000 signatories of the CASSE position are some of the world’s leading sustainability thinkers, including authors of A Future Beyond Growth. Over 200 organizations have endorsed the position. Despite growing support for its central position, CASSE has been David to the Goliaths of Wall Street, neoclassical economics, and mainstream politics worldwide. Economic growth remains the top domestic policy goal among nations and lesser states as well, even as it causes more problems than it solves in the 21st century.

Of course if you’re going to be a responsible critic of economic growth, much less a long-lasting one, you better have an alternative to offer. Fortunately it is easy to identify the basic alternatives to growth. There are but two: economic degrowth and the steady state economy. The best way to summarize the alternatives is with a reminder of what, precisely, is meant by “economic growth.”

Economic growth should be distinguished from “economic development,” which refers to qualitative change regardless of quantitative growth. For example, economic development may refer to the attainment of a fairer distribution of wealth, or a different allocation of resources reflecting the evolution of consumer ethics.

Degrowth, then, is simply defined as decreasing production and consumption in the aggregate, as indicated by decreasing GDP. Decreasing population and/or per capita consumption is required. The word “degrowth” tends to have political connotations in addition to meaning a smaller economy, especially in Western Europe where the degrowth movement originated as “La Décroissance.” (Frankly, “economic growth” also has marked political connotations, but society has gotten numb to them.) As with economic growth, degrowth in the sense of a shrinking economy is ultimately unsustainable.

The sustainable alternative to unsustainable growth and degrowth is the steady state economy, which has stabilized production and consumption of goods and services in the aggregate. “Stabilized” in this context means mildly fluctuating. A steady state economy has stabilized population and per capita consumption. Energy and material demands are gradually stabilized—in the aggregate and per capita—as the limits to productive efficiency are reached. All else equal, a steady state economy is indicated by stabilized GDP. The “all else equal” (as I described in Supply Shock: Economic Growth at the Crossroads and the Steady State Solution) includes level of technology, inflation, the propensity to use money relative to other means of exchange, and environmental conditions. But the bottom line, so to speak, is that GDP is a fine indicator of one thing: the pure size of the economy. Which makes it a good indicator of one other thing: environmental impact.

Obviously the pursuit of a steady state economy invokes a thousand devils in the details of political and cultural reforms. Macroeconomic goals, tax codes, budgets, interest rates, terms of trade: these are some of the aspects of statecraft to be dramatically overhauled with steady statesmanship. In the private sector, what about the sociology of consumption? Imagine the attitudes toward conspicuous consumption in a world that finally gets it about limits to growth.

A basic measure of justice, with an equally basic measure of logic, suggests that the place to start in moving toward a steady state economy on Earth is with the wealthiest nations. Impoverished nations need economic growth, almost by definition. We all know who the wealthiest nations are—look for example at nighttime lighting imagery—and concerned citizens from these countries have helped raise awareness of the perils of pursuing perpetual growth.

Which brings us back to CASSE, the uphill-fighting, philanthropically disadvantaged, non-governmental organization with the mission of advancing the steady state economy, with stabilized population and consumption, as a policy goal with widespread public support. CASSE is almost entirely a volunteer organization. Its “business model” should be referenced in quotes, as “business” tends to connote things like money, salaries, contracts, and related financial features that are rare in the context of CASSE. But CASSE has a volunteer model that includes international chapters unified by the CASSE position on economic growth.

CASSE’s New South Wales Chapter, led by Haydn Washington and Anna Schlunke, has demonstrated the potential of this volunteer model. When they invited me to give the keynote address at the Australian Academy of Science’s 2014 Fenner Conference (the AAS’s annual environmental conference), with the conference’s theme being the steady state economy, I had to check if it was April Fool’s Day. To convene a major academy on the steady state economy in the United States, where Big Money calls the shots even in “academic” affairs, would have been inconceivable. The fact that the CASSE New South Wales Chapter (and its partners) managed to deliver the goods on a national academy conference for the steady state economy says a lot about the New South Wales CASSE chapter, the Australian Academy of Science, and even Australia itself.

What exactly does it say? For starters, it says Haydn Washington and Anna Schlunke are diligent scholars, determined organizers, and capable communicators. It says that the Australian Academy of Science is a faithful champion of its scientific communities. It suggests, too, that an inquisitive, open-minded spirit prevails at least in Australia, which offers hope to the international community. Open minds in Australia have gleaned crucial insights from CASSE’s tireless Australian National Director, Geoff Mosley (Melbourne), and from one of the world’s leading steady state economists, Philip Lawn (Adelaide), and other Australians who presented at the 2014 Fenner Conference.

A Future Beyond Growth grew out of the proceedings of the 2014 Fenner Conference on the Environment. Not everything from the conference made it to print. My own talk, for example, stays mostly in the pages of Supply Shock, plus the current prefatory remarks. But much of the highly memorable Fenner Conference is presented herein, and I feel delighted to preface the chapters with one more thing:

The next time you hear the win-win spin that “there is no conflict between growing the economy and protecting the environment” or the equivalent in your regional culture, don’t just throw up your hands in resignation to the rhetoric. Think instead about a future beyond growth. That’s where there’s no conflict with protecting the environment, national security, and international stability.

Editor’s Note: The forthcoming A Future Beyond Growth (Routledge, 2016), edited by Haydn Washington and Paul Twomey, explores the vision and process for moving toward a steady state economy. This edited volume stemmed from the Australian Academy of Science’s 2014 Fenner Conference on the Environment. Haydn is the co-director of the New South Wales chapter of CASSE. The following is Brian Czech’s foreword to “A Future Beyond Growth.”

The Trophic Theory of Money, with Apologies to Peter Victor

Would the Steady State Economy Be a Miracle?
3 replies