And it’s important. Mahatma Gandhi said, “The greatness of a nation and its moral progress can be measured by the way in which its animals are treated.” Abraham Lincoln said, “I care not much for a man’s religion whose dog and cat are not the better for it.” Animal welfare is a barometer of national “goodness” in a sense that resonates with our common sense.

Yet if we are serious about animal welfare, we have to get beyond the mere adoration of hedgehogs and hippos. We have to face up to the big-picture, systematic erosion of wild animal welfare. It’s all around us and getting worse by the day, and our public policies precipitate it.

The most prevalent source of animal suffering is habitat destruction. Habitat includes food, water, cover, and space. When any of these elements are destroyed or depleted, wild animals suffer and often die more miserable deaths than if killed by hunters or predators.

Some animals survive an initial wave of habitat destruction only to be stranded in an unfamiliar, unforgiving environment. When a food or water source is destroyed, wild animals may starve, die of thirst, or suffer from malnutrition and the associated agonies. When thermal cover is lost, animals expend valuable time and energy trying to regulate body temperature. This lowers the time and energy available for feeding, playing, and mating. When hiding cover is lost, wild animals experience fear and stress, seeking cover from predators that may or may not be present.

What kind of a life does that sound like? It would be like getting thrown out of your home, into a perilous world with no social net, no health system, no Salvation Army, and no street corner to beg from. Yet it’s the life we’ve been forcing animals into by the millions. How can we stop? 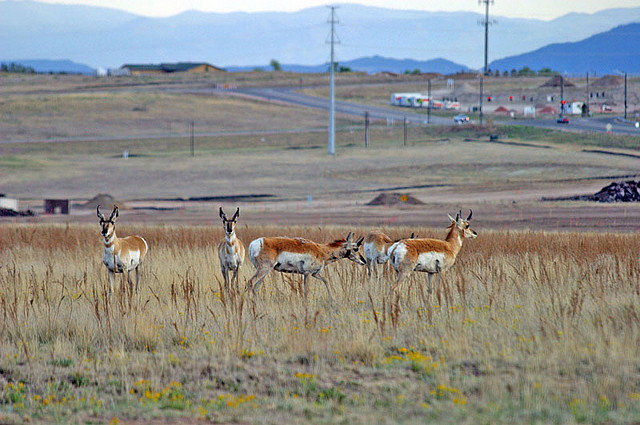 We often hear of “human activity” being the cause of habitat loss. That’s a start, recognizing our basic role in the problem, but we have to dig deeper to detect precisely what type of human activity is problematic. After all, the habitat destruction caused by humans beings isn’t spiritual activity, or neighborhood activity, or political activity (at least not directly), but almost always economic activity.

The macroeconomic nature of the problem is evident when we consider the causes of species endangerment. These causes are essentially the sectors and byproducts of the whole, interwoven economy, starting with agricultural and extractive sectors such as mining, logging, and livestock production. These activities directly remove or degrade the habitat components required by wild animals.

Another major cause of endangerment is urbanization. Urbanization reflects the growth of the labor force and consumer population as well as a variety of light industrial and service sectors. Few types of habitat destruction are as complete as urbanization. While extractive activities can be a traumatic experience for the denizens of wildlands, logging, ranching, and even mining usually leaves some habitat components. But when an urban area expands, it does so with pavement, buildings, and infrastructure. These developments are devastating to most of the animals present.

It would be hard to conceive of a more prevalent danger to animals than roads. Roads and the cars upon them leave countless animals mangled and left, during their final hours, to be picked apart by wild and domestic scavengers. Power lines induce electrocution, a significant source of bird death and crippling. Power line collisions cause their share as well. Wind farms and solar arrays, thought to be the keys to “green growth,” are the latest hurdles for migratory birds.

Pollution is an inevitable byproduct of economic production. Pollution is an insidious and omnipresent threat to wild animals. Whether it’s nerve damage from pesticides, bone loss from lead poisoning, or one of the many other horrible symptoms of physiology gone wrong, pollutants ensure some of the most excruciating diseases and slowest deaths in the animal kingdom.

Climate change is another threat to species, although its mechanisms are less direct. Temperature is a key factor in the functioning of ecosystems and the welfare of the animals therein. Climate change is pushing polar bears and other polar species off the ends of the earth; at what point will this climate-controlled conveyor belt stop? Climate change, too, is a result of a growing (and fossil-fueled) economy.

We should give thanks for the Humane Society, International Fund for Animal Welfare, and Society for the Prevention of Cruelty to Animals. These and related organizations do the good work that Gandhi and Lincoln would have endorsed. Yet when is the last time you’ve heard these organizations give a hoot about economic growth, the single biggest threat to animal welfare?

And why does no one put in a word for our furry and feathered friends when Congress, the President, and the Fed pull out all the stops for GDP growth? Where are the advocates of humane treatment of animals, when the biggest decisions are made about the rate of habitat loss and therefore animal suffering? When a hundredth percentage point less in GDP growth could save hundreds of thousands of animals a year?

Why don’t we have a mainstream media, which isn’t afraid to expose nastiness to horses and chickens, talking about the millions of animals suffering at the cumulative hand of economic growth? Has economic growth become the inconvenient truth for animal welfare?

[Republished from The Daly News for World Animal Day 2018]

Brian Czech is the founder and executive director of the Center for the Advancement of the Steady State Economy. He is the author of three books, Supply Shock, Shoveling Fuel for a Runaway Train, and The Endangered Species Act, as well as more than 50 academic journal articles.

Negative Externalities Are the Norm

Paul Krugman on Limits to Growth: Beware the Bathwater
1 reply

A Not-So-Nobel Prize for Growth Economists
Scroll to top
$