If you demonstrate to people that the NDP [New Democratic Party] can win in Alberta, suddenly anything seems possible. —Paul Fairie, University of Calgary political scientist

On the problematic political spectrum, neither the right nor the left have become wholesale champions of the steady state economy. Then again, embracing something perceived as ‘new’ has never been the strong suit of the politician. It takes years of ideological evolution among the grassroots before seemingly new and different ideas become politically palatable. Seismic political shifts like the one in Alberta suggest that big ideological evolutions are underway in the unlikeliest of places, and that steady state solutions may not be far behind.

The Canadian province of Alberta—which includes Canada’s oil patch—revealed its desire for serious change in its election of an NDP government last week. While the social democratic NDP doesn’t have an explicitly ‘green’ agenda, some policy shifts acknowledge the limits to growth—growth in the oil patch, growth in debt, growth in inequality, growth in carbon emissions, and growth in overall environmental costs. Growing the oil patch at all costs has left the province vulnerable to swings in the petroleum economy, and it isn’t building a stable economy for generations to come. 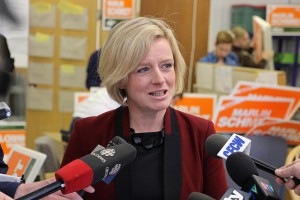 The political shift represents a strong movement away from a half-century of Alberta’s Conservative ‘conventional thinking,’ including relaxed regulations for the oil and gas industry as well as an export-first policy designed for economic growth as if there were truly no tomorrow. Time will tell whether or not Premier Notley will introduce measures to supplant carbon-intensive growth with a renewable steady state, but there are signs of movement in this direction.

In March, as opposition leader, Notley introduced a motion calling on the government of Alberta to phase out the use of coal for electric power generation in Alberta. Alberta’s oil sector produces almost as many GHG emissions as do the mining and extraction of oil from the oilsands.

This week, one of the largest oil and gas companies in Canada called upon Premier Notley to introduce a carbon tax, a measure which sits at number two on Herman Daly’s top ten list of steady state policies. The call counts as either a brilliant coordinated manoeuvre on the part of the NDP and the oil patch, or the beginning of a serious change in the way Canada’s oil and gas industry perceives its responsibilities in the face of climate change.

The NDP victory also signals a willingness to tackle point three on Mr. Daly’s top ten list—limiting the range of inequality in income distribution. While Premier Notley has not signalled a willingness to institute a ‘maximum income’ level, she has designs on raising the minimum wage to $15 per hour from the country’s second lowest minimum wage of $10.20. The NDP have also vowed to reintroduce progressive income taxes, and raise corporate taxes.

This is not a promotion for social democracy per se. Social democratic governments in different jurisdictions, like my home province of Manitoba, can sometimes reflect neoliberal economic thinking rather than focus on designing an economy for fairness. But in Alberta’s example, folks have acknowledged the problems associated with half a century of growth in the extractive industry, environmental degradation, and inequality. As the political pendulum shifts in other jurisdictions, there is an opportunity for political parties of various stripes to reconsider how they can respond to growing grassroots frustration with a debt-ridden, environmentally destructive, inequitable economy.

As the costs of uneconomic growth continue to escalate, and as a new generation prepares to bear those costs, we can be sure that further movement in the direction of a steady state economy will not only become more palatable, but absolutely essential.

The Future History of Political Economy – Part 1
Scroll to top
$