By Karen I. Shragg

Spotting a “Road Work Ahead” sign is enough to make any driver groan or nervously clutch her steering wheel. These warnings are meant to ensure people’s safety, yet they often also come with a myriad of traffic problems: congestion, noise, car wrecks, etc. In cities especially, orange cones are littered everywhere, causing copious delays and all for the sake of further “improvement” projects. 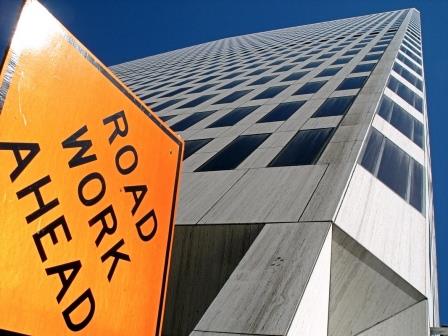 Warning: these signs are inescapable in cities all across the USA. (Image: CC BY-SA 3.0, Credit: josefstuefer)

While infrastructure repair is an ongoing necessity, these endless construction headaches are symptomatic of something deeper: A fruitless scramble to accommodate our growing numbers. More people means more cement. More cement means more traffic, more pollution, and higher demands on our resources. We build out and up with total disregard for the impact on our quality of life, the survival of wildlife, and the sustainability of our water resources.

Cities throughout the USA are strangled with construction because city managers are encouraged by their councils to welcome developers into their neighborhoods. They still believe in the antiquated narrative that growth equals progress, but the truth is the complete opposite. More and more people fuel the now common vistas of sky cranes and bulldozers that are an integral part of city growth in the USA.

The Worn-Out Lies of “Open-Road” Projects

Taxpayers are consistently promised an ever-elusive “open-road” freedom when construction projects are completed. City councilmen and women trust their transportation engineers with all of their fancy graphs and charts that traffic bottlenecks will be resolved. They’re never able to fulfill their promises, and the weight of responsibility doesn’t fall on the engineers, either. Population growth hurts even the best transportation projects. This leaves us with traffic headaches, huge price tags, and no congestion relief in sight. It costs approximately 4 million dollars per mile to go from four to six lanes of highway. Taxpayers pay the bill, and the only results are poor air quality and more room for traffic jams. 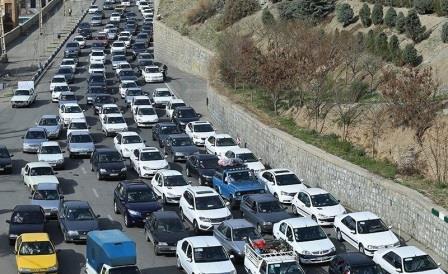 Some traffic jam to go with your morning news. (Image: CC BY 4.0, Credit: Abbas Shariati)

Road closures have become so prevalent that Departments of Transportation across the country have websites permanently dedicated to detours due to road construction. Local news stations also report on traffic—not just once, but multiple times daily. We accept that traffic is unavoidable, so we make do by planning trips ahead and traveling before peak times.

It’s common sense: Road construction takes time. City populations are growing rapidly. By the time one construction project is completed, more cars are squeezed onto the road and city councils are calling for another project. Yet instead of questioning this endless cycle, city councils continue to accommodate growth by introducing or updating urban development and traffic control plans every few years.

Construction woes are particularly frustrating in the Southwest where population is growing the fastest. In the Midwest, though, it’s much the same story. In my own hometown, the Twin Cities of Minnesota, the construction of Minnesota Highway 62 took four years of orange cone headaches to complete. Yet traffic was still horrible by the end of the project, and now it’s far worse!

Well, no wonder. Highway 62 was completed in 2010, and the metro population of the Twin Cities grew by 9.3 percent between 2010 and 2018. What happens in a city with limited mass-transit choices? Thousands of residents are forced to drive, of course, erasing the “open-road” promises of highway improvements.

Cost overruns and delays due to weather events are also incredibly common in road construction projects, and yet they are readily accepted as business as usual. This whole merry-go-round of building roads to accommodate growth remains virtually unchallenged by citizens and politicians who accept these failures as a part of “progress.”

Growth is the Wrong Medicine for Progress

Progress is supposed to make things better. High rise-developers make promises that their projects will be key to a better future for all. In turn, city councilors offer TIF (tax increment financing), which allows governments to invest in public infrastructure and pay at a later date—as much as 25 years away! There is no full-cost accounting of such developments. The projects are meant to line the pockets of city councilors who perpetuate the myth that they are helping their city’s vitality. What these councilors don’t account for is a dense population, which creates more traffic and crime and less of a sense of community among residents.

Furthermore, the construction of high-rise apartments threatens our environment and resources. Densely populated areas light up the night sky with light pollution, destroying the chance to see stars. Hundreds of residents in high-rise buildings put a concentrated demand on water for showers, cooking, and laundry.

All of these developments require fossil fuels and raw materials. The earth is a limited place, and developers treat these materials as if they can be extracted for forever. For instance, sand would appear to be an unlimited resource. However, due to our ever-growing population’s need for glass and concrete, sand is being extracted at a faster rate than it is renewed. The problem also lies in the type of sand being used: Marine sand is too full of salt, and desert sand is packed with crystals, making it poor for creating concrete. Therefore, all sand used in the making of glass and concrete must be mined. 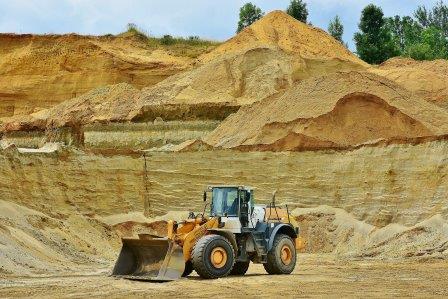 Most people don’t consider the resources needed for construction, such as sand. (Image: CC0, Credit: RitaE)

To break the cycle of growth, we must first accept the limits of the earth’s resources and that development pollutes our life-giving biosphere. This is particularly true in the developed world, which is hooked on growth, much like an addict is hooked on drugs. The benefits of growth, like illicit drugs, are temporary and always end up creating more damage in the long run.

For example, the world has added over 5.5 billion people in the last century and continues to add over 80 million per year. The US population just hit 330 million in 2020 and is still growing by over one million per year. So, why aren’t more people concerned by these numbers? For one, more growth means more profit. Politicians and business leaders equate a growing economy to the “progress of mankind,” when in reality, the only thing it advances is their positions of power.

Another problem is that the conflict between economic growth and environmental protection is ignored by the media, and even by most environmental groups. If the conversation doesn’t start there, it’s not going to get far.

Catastrophic mortality rates can ultimately be depended upon to take care of the overpopulation problem, but in ways no one wants to experience. It is lazy and evil to allow nature to take such a course for us. It’s not inevitable, either.

Accommodating GDP growth in our hyper-capitalist, overpopulated world is like putting out a welcome mat for cancer, or thinking we can get around it with chemotherapy and radiation. Breaking free from the grip of growth is much easier said than done, but it all begins with changing our worldview. We’ve been led to believe that growth is our salvation, when clearly it is just the opposite.

Thankfully there are activists and NGO’s dedicated to clarifying this. Aligned with CASSE principles, for example, is the Overpopulation Project, which in turn lists 37 national and international groups that are dedicated to working on the critical issue of population growth. These organizations have given plenty of thought about what to prioritize. Should the focus be on total fertility rate? Do we need to tighten our immigration policies? Is it wiser to start by amending the Employment Act? Taken together, one thing is clear: These organizations amount to advancing the steady state economy as the sustainable alternative to growth.

I propose that each of these organizations and efforts have their merits; we should appreciate them all. Meanwhile, we need to start seeing the orange-coned construction zones for what they really are. They represent not only short-term headaches but long-term migraines. The only cure is a detour from the highway of growth.

Dr. Karen I. Shragg is a retired nature center director, author, and overpopulation activist. She runs her own environmental consulting LLC in Bloomington Minnesota.

COVID-19 in the UK: A Choice between Life and Lucre?
Scroll to top
$