It isn’t true that population size (relative to the size of the earth and its resources) is the “main cause” of unsustainable environmental impact, or the “main problem” when it comes to depletion, pollution, and other concerns over health and happiness for people today and in the future. It also isn’t true that “the real problem” is too much consumption per person by rich people. It is both. It is P x A in the formula:

Many researchers have measured the relative contributions of population and affluence to various kinds of impact. However, since decreases in population can be offset by increases in affluence, and vice versa, changes in either factor do not necessarily lower impact.

Can we be complacent about population size? Can we count on declining birth rates to stabilize or even lower population, now over 7 billion and increasing by 80 million per year (the size of Ethiopia’s population)? We are also, after all, experiencing declining death rates, and rising life expectancy counterbalances declining fertility to some extent. The deeper question is whether a population of 7 billion — or 8 billion or even 11 billion (low and high projections) — exceeds the earth’s carrying capacity.

The number of people that can live on earth obviously depends on how much food we can produce now and over the long term. The evidence suggests that we cannot count on food production to keep pace with population growth:

A population’s sustainability depends on its affluence. Therefore, before any society can compute its carrying capacity, it must first decide what material lifestyle it wants — how much it wants to consume. Does it want to eat meat (and not just grain), or use land for sports and entertainment (and not just agriculture), and does it want wilderness for other species? If so, its maximum population is proportionally lower. Once a society has politically decided its desired level of affluence, it can assess appropriate technologies for producing its goods and services most efficiently. Only then can a number be calculated for a desirable and sustainable population size. 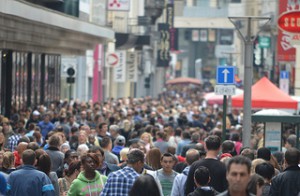 Population and affluence are both components of overall environmental impact.  Credit: www.TheEnvironmentalBlog.org

Many countries, if they were to estimate these parameters, would conclude that they are overpopulated, especially if they remember that sustainable size takes into account the rights of future generations and the desirability (on either utilitarian or ethical grounds) of leaving room and resources for non-humans.

Once overpopulation has been recognized, the search for appropriate population policies begins. In the rich countries (the ecological footprint of a rich child, ceteris paribus, will be greater than that of one born in poverty) one could end subsidies for child-bearing, including tax breaks, salary bonuses, parental leave from work and even one-off payments for having a child. Any policy change must consider the rights of already-born children and the goal of gender equality. In poorer societies there is unmet demand for the means of preventing pregnancy. Birth control “technology,” if available to all who want it, would cut today’s 80 million excess of births over deaths by perhaps two-thirds.

Whether rich or poor, a country could also choose to adopt direct policies. Some possibilities, as promoted by many ecological economists, are:

These measures however raise the question of whether a society has the right to legislate how many children its members can have. On this issue, two questions are often confused: (1) the legitimacy of restrictions on individual procreative freedom itself, and (2) the legitimacy of the political process deciding them. If it is an inalienable right to have as many children as one wants, then quotas and other constraining policies would be out of bounds. Treating procreation in this way fits well with the laissez-faire, individualist philosophy of our time. The opposing view holds that reproductive freedom has limits, that at some population level, the interests of society are harmed, and restrictions that support the common good are acceptable and even desirable. Population size, moreover, is one of many issues affecting living beings without a vote, namely other animals and future humans. Concrete proposals have included the right to one child, with permits being transferable (for free or for a price) to someone else.

Such direct policies can be decided democratically or autocratically, and it is the latter that leads many to think immediately of “compulsion” or “coercion” when imagining them. However, every law, by definition, coerces us, so let us just agree to use a democratic process and reject the option of an authoritarian eco-regime. The question then becomes: is it legitimate for a majority — say, 51 or 60 or 66% of the voters — to restrict everybody’s procreative activity? A majority cannot, after all, legitimately legislate the incarceration or death of all red-heads.  But red-heads don’t pose the same problems that overpopulation does.

There is truth in the statement, attributed to David Attenborough, that one cannot conceive of an ecological problem that wouldn’t be easier to solve with fewer people. For example, in poorer countries, hunger and environmental degradation could immediately be mitigated if there were less demand for resources. The issue is to figure out first how many fewer people we’re aiming for, and second how to make a transition that is democratic, compassionate, and fair.

For more details on this topic, see the full paper, which raises more questions and offers many references for further reading.

#BanFlightsUSA, Before It’s Too Late!
3 replies

Selecting “Surrogate Species” for Conservation: How About an 80...
Scroll to top
$