The year was 1965, and on the morning of July 9 in Geneva, Adlai Ewing Stevenson II prepared for his final speech to the UN. A former Governor of Illinois and presidential candidate, what he was about to say might still become his greatest contribution. But we’re in danger of forgetting it. 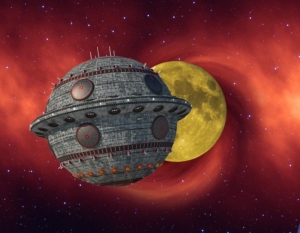 “We travel together, passengers on a little spaceship, dependent on its vulnerable reserves of air and soil.” (Image: Pixabay License, Credit: Ray Shrewsberry)

What Adlai Stevenson proffered the world that day was a metaphor. A simple yet powerful idea that, over 50 years later, we need more desperately than ever.

The world has changed since the 1960s. Neoliberalism arrived in full force in the 1970s and only sunk its claws deeper into our society since. We live in a technologically advanced, globalized world. We are more interconnected than ever, keeping in touch with our loved ones on our phones and laptops while physically separated by a virus that went global in the blink of an eye.

As technology has removed our limitations, streamlining our communication, travel and consumption, it has become increasingly easy for us to forget our one great, insurmountable limitation: We’re mere travelers on Spaceship Earth. A ball of rock, that is, floating through space, with 7.6 billion of us aboard. In our globalized world, however, the economy has grown into something “other,” detached from the reality of our limited existence. We have alienated our economy, untethering it from a consciousness of limits, feeding it constantly to fuel its endless appetite. In doing so, we’ve created an alien that no longer comes in peace.

Adlai Stevenson and the Spaceship Earth

We travel together, passengers on a little spaceship, dependent on its vulnerable reserves of air and soil; all committed for our safety to its security and peace; preserved from annihilation only by the care, the work, and, I will say, the love we give our fragile craft. We cannot maintain it half fortunate, half miserable, half confident, half despairing, half slave—to the ancient enemies of man—half free in a liberation of resources undreamed of until this day. No craft, no crew can travel safely with such vast contradictions. On their resolution depends the survival of us all. – Adlai Stevenson

This was Stevenson’s metaphor, the Spaceship Earth. In truth, he was not the first to come up with it. The first mention of Earth as a ship traveling through space appears way back in 1879 in Henry George’s book Progress and Poverty. The idea even makes an appearance in George Orwell’s The Road to Wigan Pier. But in 1965, four years after Yuri Gagarin became the first person in space and four years before Neil Armstrong became the first to walk on the moon, the image had a new resonance.

Buoyed by the cultural significance imbued upon it by the space age, the Spaceship Earth worldview gained further traction as the decade wore on. The year after Stevenson’s speech, the economist Kenneth E. Boulding released an essay entitled The Economics of the Coming Spaceship Earth.  In 1968, the author R. Buckminster Fuller released his book Operating Manual for Spaceship Earth. Both helped popularize the idea. Sadly, since then it has been largely forgotten outside the field of ecological economics.

Though the Spaceship Earth metaphor is inextricable from the historical context that produced it, it has even more relevance today. Since the 1960s, “the economy” has slowly become more and more divorced from reality. This process of alienation has led us to a point where endless growth seems not only possible, but a desirable outcome. We have convinced ourselves that we can create something out of nothing. The Spaceship Earth metaphor helps us remember that we cannot.

Like the famous “blue marble moment,” Spaceship Earth provides us with a visualization of an uncomfortable but necessary truth: Earth is finite. We are terrifyingly dependent on our natural, exhaustible resources. In fact, part of the appeal of the growth-at-all-costs mindset is that it gives us a false sense of security. We don’t have to confront our ecological problems if we believe that those problems are in service of something greater: economic growth. In accepting this ideology, we passively accept the principles of trickle-down economics, believing that—whatever the evidence to the contrary—the benefits of growth will somehow find their way to us eventually. 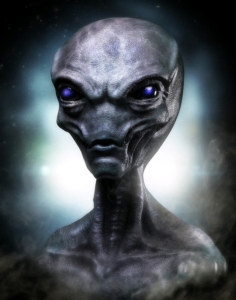 What is the nature of this economic alien? (Image: Pixabay License, Credit: klebesonfra42)

In this way, we have allowed “the economy” to become its own separate entity because we are taught through the hegemonic actors in government, fossil fuel industry, and the media that a larger economy does in fact serve our interests. But the Spaceship Earth reveals that this is untrue. In its terms, the pursuit of economic growth is burning our fuel at ever greater rates. One day we will run out. It is an uncomfortable truth, but also an unavoidable one. The sooner we confront it the better.

Uncomfortable truths are difficult to communicate, however. It is hard to convince people of something they don’t want to hear. That is why, in my opinion, visual tools, metaphors, narratives, and stories are so important for steady staters. Facts often don’t land if they tell us something we don’t want to acknowledge. But images and stories get stuck in our heads. They worm their way into our subconscious and take hold. The story that we can go on using up our natural resources forever in the service of an alienated economy is nothing more than a fairytale, but it has become so deeply embedded that it is hard not to accept as gospel. We have to find new images, new narratives that frame our planet in a different way. The Spaceship Earth did that in a way that was new, exciting, and culturally relevant. The challenge is all the more pressing now to find a 21st century equivalent.

If you are in a shipwreck and all the boats are gone, a piano top buoyant enough to keep you afloat that comes along makes a fortuitous life preserver. But this is not to say that the best way to design a life preserver is in the form of a piano top. I think that we are clinging to a great many piano tops in accepting yesterday’s fortuitous contrivings as constituting the only means for solving a given problem.

We cannot continue to cling to the “piano top” of economic growth. It has solved problems in the past, but in today’s Western economies, it cannot continue to. The pursuit of growth blinds us to the environmental damage it causes. The anthropogenic climate crisis is a problem that cannot be solved by growth. Indeed, continued growth will only make it worse. That means we need a different solution. And that solution is the steady state economy.

Adlai Stevenson’s notion of the Spaceship Earth may have been a product of its time, but its lesson is even more urgent today. We are merely passengers aboard a ship that has everything we need in abundance. The biggest threat to our voyage is greed.

Contrasting Climate Policies in the House and Senate
Scroll to top
$