Remember Tom Perkins? Probably nobody wants to, but with all the talk about the profligacy of the one percent, Perkins comes iconically to mind. He’s the billionaire who nauseated the ninety-nine percent by suggesting that American “progressive” (his word) thinking was tilting toward Kristallnacht, due to an attitude toward the one percent. As if he and his capitalist captain cronies were innocent street-corner merchants and the rest of us jack-booted Nazis. What a way to win friends and influence people!

If we’re going to use World War II analogies, let’s at least use the correct one.  In this case it’s not Kristallnacht, but Lebensraum. And the one percent would be the perpetrators, not the victims.

Recall that the pursuit of Lebensraum — living space — was Hitler’s stated excuse for invading Poland, the beginning of World War II. It’s a doctrine to be ever wary of, and it might not always be as explicit as Hitler made it. (The relevance to Putin and Ukraine, for example, is left for others to speculate on.)

To understand the logic of Lebensraum, we need a quick review of structural economics. The economy has three basic sectors: agricultural/extractive, manufacturing, and services. (The “financial sector” is fairly distinct, but falls within the general category of services.) It seems like this basic structure ought to be conventional wisdom, but in the age of the Internet, economic wisdom is disappearing by the bitcoin. If we’re not careful we’ll end up like King Midas, a foolish one percenter if there ever was one. 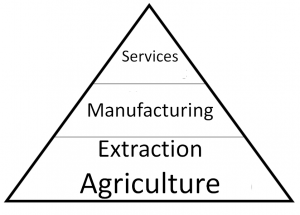 The three basic sectors of the human economy, with agriculture/extraction lumped together as “producers” of food, energy, and raw materials.

Every economy on the planet — and every political state — depends on its agricultural and extractive base for everything else. It doesn’t matter where the agricultural base is situated, or who controls it. Whether it’s the financial sectors of Hong Kong, the ecotourism of Costa Rica, or the State of Rhode Island, it’s agricultural and extractive surplus, coming from somewhere, that frees the hands of society for the division of labor. Adam Smith noted as much in Wealth of Nations. It’s the stuff of statecraft. Thomas Jefferson knew all about it. 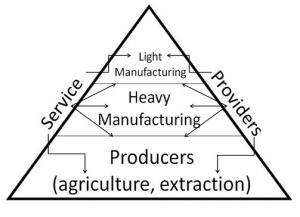 The basic sectors re-arranged as trophic levels. Strictly speaking, the producers (farmers and extractors) and manufacturing sectors (from heaviest to lightest) are true trophic levels. Service sectors operate throughout the trophic structure, much like pollinators, scavengers, and decomposers operate in the “economy of nature.”

The basic economic sectors amount to the “trophic levels” of economic activity, to borrow a term from ecology. It’s a term worth borrowing, too, given that ecology is all about the “economy of nature.” A little ecology goes a long way toward understanding the plight of Homo sapiens in the 21st century. Humans are stuck with the same physical and biological laws that operate in the economy of nature.  There’s no making something from nothing — Lebensraum for example — and no waving a magic wand to make all the competitors disappear. Guns and bombs are not magic wands.

Of course we all know that the American economy has a lot more than the basic farms, factories, and financial firms. For example there are some really fancy watches, 289-foot yachts, and even personal submarines. You know, the kind of stuff Tom Perkins has to have. Well, with plenty of agricultural and extractive surplus at the base, there’s enough money left over in society for such luxuries, at least for those who commandeer a high enough percentage of the money.

Now who among us contributes most to the pressure for Lebensraum? (Hint: It’s easy to tell with the trophic theory of money.) All else equal, it’s those who require and spend the most money, because the amount of money indicates the level of agricultural and extractive surplus that had to be issued from the base of the economy.

The point here seems even more obvious when the expenditure is on luxury material goods, say for example “your typical football field size yacht,” as Perkins referred to his “Maltese Falcon.” The point is more nuanced when it comes to spending hundreds of millions on, say, derivatives in Hong Kong or ecotourism in Costa Rica. But whether the millions are spent on nuts, bolts, or pure nonsense, the origination of the money required Lebensraum at the base. 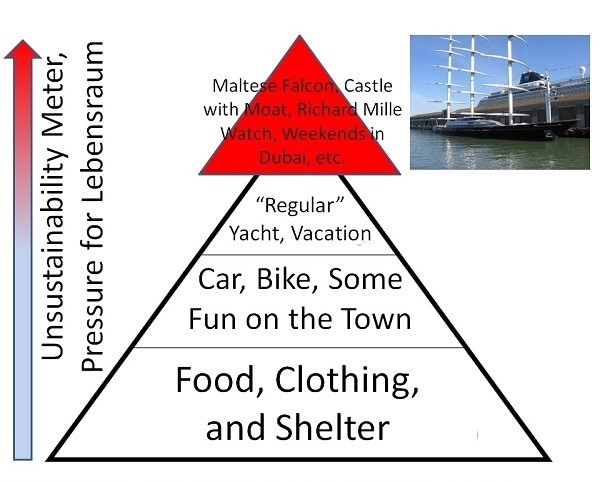 Unsustainable consumption of the one percent and pressure for Lebensraum. Note how disproportionate the extremely luxurious goods and services are. The alarming disproportionality indicates how the base of the economy must grow outward to support the acquisition of such goods and services. In other words, if agriculture and extraction is at full capacity within the borders, the nation must commandeer Lebensraum to support the luxurious consumption (Photo Credit: Greg Covey.)

And please, don’t tell us the real onus is on the 99%. Obviously every bit of conservation helps, but how much do you spend in a year? Somewhere between $20,000 and $60,000? That means a guy like Perkins or Trump or Schwarzman spends not 10 times as much as you, not 100, but more like a thousand or even 10,000 times as much. That requires a helluva lot more Lebensraum! I don’t know about you, but I don’t think that should be part of the American way.

This is not to say the one percent is guilty of conspiring to precipitate a war for Lebensraum. It’s hard to imagine the Donald, for example, having any type of geopolitical strategy. And if there is one thing I have learned as a visiting professor of natural resource economics, it’s just how deeply misinformed people are about the trophic origins of money. Our society, political system, and even academia abound with fuzzy notions of “dematerializing” the economy and “green growth.” It would be hard to blame the one percent for an ignorance of ecological economics.

On the other hand, somewhere around 99% of us, if stopped for violating a relatively obscure statute or regulation, will be told, “Ignorance of the law is no excuse.” In this case we are talking about natural law; the physics and biology establishing the trophic structure of the economy.  A guy like Perkins is supposed to be a cut above the rest; a brilliant captain of industry, high-tech industry no less. Shouldn’t we expect more acumen with regard to the functioning of the economy he has supposedly mastered?

Frankly, I’m not so sure Perkins is blissfully ignorant after all.  His 60 Minutes interview suggested he knows something is wrong with the gaudy expenditures on yachts and moats and such.  In fact, he was too embarrassed to say how much he spent on the Maltese Falcon because he admitted the money could have been used for far more beneficial and charitable purposes.  Yet he just can’t control the urge to have the biggest and most expensive toys, largely to stroke his ego, he admits.

Now in America there are other behaviors, stemming from supposedly uncontrollable urges, that wreak havoc in society. These behaviors are not only frowned upon but punishable by law. Why are there no deterrents to reckless levels of consumption?

It bears repeating that pushing for perpetually more stuff — especially luxury goods and services, the biggest, best, and most expensive — is tantamount to Lebensraum doctrine. It may not be intentional, but it’s basic economics. And bad economics.

The Hidden Costs of Cheater Economics on Human Health & the Future of Life...
Scroll to top
$