One hundred years ago April 15, the Titanic disappeared beneath the icy waters of the North Atlantic. Several have marked this anniversary by noting the similarities between the Titanic and human civilization. In Titanic: The Final Word with James Cameron, on the National Geographic channel, James Cameron, director of the blockbuster film, Titanic, aptly turned the event into metaphor:

Part of the Titanic parable is of arrogance, of hubris, of the sense that we’re too big to fail. There was this big machine, this human system, that was pushing forward with so much momentum that it couldn’t turn, it couldn’t stop in time to avert a disaster. And that’s what we have right now.  We can’t turn because of the momentum of the system, the political momentum, the business momentum.*

The metaphor is remarkably apt, as the size of the Titanic meant it was not nimble. It could not stop or turn on a dime. The captain needed to look far ahead on the horizon and plan ahead. Doesn’t that sound like the predicament in which civilization finds itself? We have built up an increasingly complex system, and it is a ginormous one (7 billion served), touching all corners of the planet. It’s impossible to change overnight. And looking ahead with only a short time-horizon serves it very poorly. 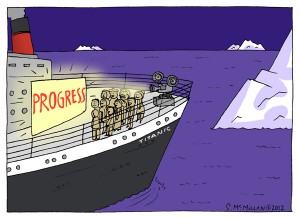 There’s something else keeping us from changing course, however. It is lack of desire. Our culture is not interested in a course correction because we’re distracted. We don’t see the iceberg ahead because we’re fixated on a cultural story that defines progress as growth, and growth as progress. This worldview has led us to develop a system that depends on everlasting growth.

Fortunately, when Mother Nature says, “enough,” key parts of the system begin to fail. I say fortunately because it’s hard to argue with success. As long as this system appears to be serving most of us well, we are not likely to throw it out. The failure of the system, which we’ve begun to experience, is our best hope for motivation to get moving toward a more enlightened arrangement.

In the documentary, GrowthBusters, I refer to perpetual growth as our “operating system,” comparing it to Windows or Mac OS. The belief, the dependence on, and the pursuit of growth are what we’re all about. It’s the computer code that manages everything we do. Many call it our cultural narrative. If we were on the bridge of the Titanic, it would be in our charts, affecting our compass, on our radar. It informs (or misinforms) everything we do.

Without a doubt there are economists, sociologists and activists developing patches for this growth-based operating system. There are also scientists and activists developing apps that help us lighten our load on the planet. Renewable energy, water and land conservation, permaculture, and transit-oriented development are all examples of what I would call improved software applications, but they are still written to run on our old, growth-based operating system. With a system committed to everlasting growth, they will not keep our civilization from running off a cliff.

This is not to disparage them; it is to keep us from relaxing, thinking they will enable our civilization to become sustainable. They can be meaningful parts of a completely new system. But we do have to throw out the old system and start with fresh computer code. Upgrading from Windows 7 to Windows 2013 won’t do — Windows has to go.

Changing our cultural narrative is a tall order. In my film, Paul Ehrlich says, “We’re faced with a gigantic challenge that we haven’t been prepared for, either in our genetic evolution, or more importantly, in our cultural evolution.” I believe it’s the biggest challenge our civilization has ever faced. Who can we call? I’d love to say, just call GrowthBusters. After all, the film is my biggest contribution to the change we need to make.

But this challenge is too big. The film takes only the first step, which is to raise awareness that we have a culture that worships growth everlasting, and to help audiences realize it’s not delivering on its promise. I see the role of storytellers like Daniel Quinn, Dave Foreman, Richard Heinberg and myself as one of preparing our fellow human beings to be receptive to the completely new computer code that steady staters, transitioners, de-growthers and others are developing.

The time is now. The pieces are falling into place. The old system is crashing. We’re not able to reboot and get back to the business of robust growth. It will be key that we don’t rush in with patches or rely only on new apps. We must be relentless in our insistence on adopting a new operating system.

*Thanks to Joe Romm of ThinkProgress for alerting me to Cameron’s words.

Dave Gardner is the director of the non-profit documentary, GrowthBusters: Hooked on Growth, currently screening around the world. CASSE executive board members Brian Czech, Herman Daly and Peter Victor appear in the film. This commentary was published simultaneously here, as part of a series honoring the 40th anniversary of The Limits to Growth. Dave asks that you take his Pledge to Think Small to help speed adoption of a new operating system.