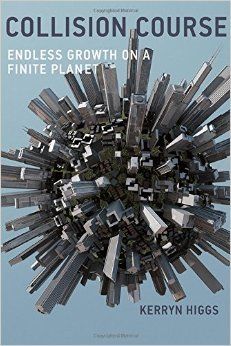 This informative book is about the rise of economic growth to the status of the number one goal of nations; the short-lived challenge to that dogma from the book The Limits to Growth (1972); the solidity of the Limits position as confirmed by subsequent data and the analyses of others; the intellectual poverty and dishonesty of the growth economists’ reaction against the Limits argument; and how it nevertheless happened that through modern public relations and well-financed ideological think tanks, the intellectually weaker growth arguments prevailed. Higgs focuses on the USA story, but with informative parallels from her native Australia.

Higgs documents the cogency of the Limits position and how the business as usual projection of the World Model has for over 30 years fit the data better than any standard economic model. Higgs also exposes how the economists resorted to ridicule and arrogance as a substitute for reasoned refutation in their response to Limits. This story is well known to me because I was a participant in the debate. I can testify that Higgs’ retelling is accurate and insightful. It is also refreshing to me that MIT Press published her book. This indicates the welcome likelihood that some anonymous member of the MIT department of economics no longer has a veto over the decisions of the MIT Press.*

What to me was new and challenging was Higgs’ detailed historical consideration of the following question: Given that the Limits position is fundamentally correct and that the growth economists’ “refutation” is based on ignorance, vested interests, and dishonesty, how did it come to pass that the economists’ erroneous position prevailed over the much more cogent and scientifically based Limits position? That it has done so can hardly be doubted, even if one still hopes for better in the future. For those of us who believe in the persuasive power of reasoned argument, this fact, and Higgs’ explanation of it, is a real kick in the head. Nor does it bode well for democracy. How did it happen? Can we learn from it? Can we recover from it?

The conscious and intelligent manipulation of the organized habits and opinions of the masses is an important element in democratic society. Those who manipulate this unseen mechanism of society constitute an invisible government which is the true ruling power of our country . . . It is they who pull the wires which control the public mind, who harness old social forces and contrive new ways to bind and guide the world.[1]

Propaganda becomes advertising which becomes public relations identifying “the greater good” as defined and propagated by well-endowed “public interest” think tanks. According to Higgs, soon-to-be Associate Supreme Court Justice Lewis Powell, Jr.’s 1971 memorandum to the US Chamber of Commerce gave strategy and operational structure to Bernays’ philosophy. It led to the establishment of think tanks with the explicit purpose of defending “free-market capitalism” against labor unions, welfare legislation, and taxes on business. This docket was extended to include combating environmentalism and any questioning of the primacy of economic growth that would only “confuse” the masses. This opposition was already being put in place by the 1972 publication of Limits.

Democracy presupposes a citizenry capable of thinking for themselves rather than being misled by propaganda. But with the average family now holding two full-time jobs that are often uncertain, plus raising kids, there is little time for keeping informed and understanding increasingly complex economic issues. The appeal of easy ready-made answers lends force to Bernays’ cynical view of democracy as the art of manipulating the opinions of the masses.

In addition to the business PR opposition, there was the fierce opposition of academic economists who were religiously committed to the “Keynesian-Neoclassical growth synthesis.” The Limits argument had to be opposed because if it were true, then very many very important economists would have been very wrong about a very important issue for a very long time. So Limits faced the united opposition of business interests represented by the Chamber of Commerce, the National Association of Manufacturers, the propagandistic think tanks, and the academic economists. In the face of such concerted opposition, it is remarkable that Limits, by virtue of logical argument based on scientific premises, managed to get the significant hearing that it temporarily did. But it has not prevailed against the overwhelming growth coalition.

One of the verbal PR tricks is to use the word “free” as in “free market” and “free trade” instead of the more precise word “deregulated.” The deregulated market, with deregulated global trade and deregulated finance, is destroying the freedom of the vast majority to attain a sufficient income for a decent life. Higgs shows how income and wealth have been enormously concentrated by the growth economy and chides the Left, with which she is usually sympathetic, for being stubbornly slow to recognize the costs of growth, and for persisting in the belief that the “bigger pie theory” is the best hope for the working class.

The anti-Limits PR apparatus is so strong now that it even dares to oppose science in order to defend growth. This is most evident today in the denial of climate change and the attack on climate scientists financed by the fossil fuel industry. This strategy of “sowing and selling doubt” was previously used with some success by the tobacco industry. The American Enterprise Institute, the Cato Institute, the Heritage Foundation, the Club for Growth, the Heartland Institute, etc. can be counted on to conduct “independent” studies that reach conclusions supporting deregulated international trade, deregulated finance, repeal of environmental and welfare legislation, etc., all in the name of growth.

Even the public policy schools in universities, which have been relatively independent and objective, are now often staffed by joint appointments with these moneyed think tanks. This, I have observed from having taught in a school of public policy for fifteen years. Economics departments, where I also have long experience, have become almost irrelevant, as Joan Robinson put it some time ago, having “run off to hide in thickets of algebra, leaving the important questions to journalists”—who by default then get their information from the think tanks. And of course, the corporate media are only too happy to eat what they are freely fed.

At least the Limits debate aroused economists from their dogmatic slumber enough to make a few ad hominem counter-attacks in self-defense. But they are too self-confident to see the need for actual thought and have gone back to sleep. Higgs’ book is a wake-up call but offers little on specifically what policies to adopt once awake. Maybe that will be the subject of a future effort—first things first, she might well say.

A short review cannot do justice to such an excellent and detailed book. In conclusion, I want to return to the point that Higgs’ explanation of the ascendancy of the weaker anti-Limits position constitutes a kick in the head for those of us who believe in the persuasive power of a reasoned argument. Higgs’ book itself is a reasoned argument. She has clearly not given up on persuasion. But she reminds those of us who have a tendency to forget, that reason and honesty must confront power and corruption, not just an honest error. Even correcting the honest error requires a substantial paradigm shift—a change from the pre-analytic vision of the economy as the whole with nature as a part, to the recognition that the economy is the part. The economy is an open subsystem of the enveloping ecosphere that is finite, non-growing, materially closed, and entropic. Reason and truth will ultimately prevail, but Higgs makes it clear that it will take longer and be a more costly fight than many of us have imagined.

A New Economy Will Help Save Rivers and Fisheries

A Business Built for Resilience
Scroll to top
$