Bill Clinton took a welcome step toward reality. In his Democratic Convention speech, he pointed out that cutting taxes on rich people and fighting endless wars increased federal debt, and more of the same would make things even worse. Tax cuts and deregulation during the Bush administration failed to bring prosperity and helped cause the global financial collapse and widespread joblessness.

The Chicago School of economics has been preaching for decades, with lots of money from rich people adding to the volume of their message, that low taxes, small government, and deregulation are the road to nirvana. But the last time we had low taxes on the rich and little regulation was called the Great Depression. Clinton, at least, has come to understand that America made a mistake in believing the fairy tale that “government is the problem, so let’s cut rich people’s taxes.”

Clinton still remains bamboozled, however, by the neoclassical nonsense that sees economic growth as the solution to unemployment. On the Daily Show Clinton offered a demographic path to prosperity. He opined that because most of America’s competitors — Russia, Japan, China, and Europe — have low birth rates and aging populations, we will have a younger workforce with a lower old-age dependency ratio, so growth will solve our unemployment and debt problems.

But the notion that population growth cures unemployment is false, just like the idea that cutting taxes on the rich raises revenue and cuts the deficit. The immigration and higher birth rates that keep the population younger also guarantee a higher young-age dependency ratio and a growing population. In a world constrained by high commodity prices and other symptoms of reaching the limits to growth, a growing population leads to high unemployment, rising cost of living, and falling wages. If a young population leads to prosperity, why aren’t places like Nigeria, Rwanda, and Uganda thriving? Why has China gotten so much richer since starting its “one-child” policy?

The fertility rates in all the Asian tiger economies dropped below the replacement level during the decades when their economic output increased dramatically. Hong Kong and Singapore, places with no natural resources and aging populations, have a higher per capita income than the United States. Hong Kong’s 0.97 children per woman and Singapore’s 1.26 are two of the lowest fertility rates in the world.

Birth rates that low mean each generation inherits twice as much as the one before, and a future economy can have full employment with half as many jobs. Scarcer labor means higher wages. New technology and rising productivity can be used to raise incomes instead of what happens with a growing population (i.e., society treads water as the benefits of increasing productivity are canceled out by more people consuming more resources). Low fertility is the path to high incomes and abundance. High fertility is the path to poverty and scarcity.

America’s ongoing population growth has played a role in causing higher unemployment rates, more difficulty funding education, falling real wages for workers, and the incarceration of two and a half million people. You would think that in a country where oil production has fallen by 40% since 1972, a country responsible for so much of the global climate change problem, where forests have been burning, cities have been wrecked by hurricanes, and crops have been withered by drought, we would have learned that more growth is not the answer to unemployment and budget deficits.

Bill Clinton should read ecological economists like Herman Daly. He should pay attention to systems thinkers such as Donella Meadows and Bill McKibben, and consult Al Gore about our ethical responsibilities to future generations. Growth cannot be the solution to unemployment. If all countries decide to grow their populations and their economies, ice will melt, putting cities under sea level, oil will run out, food prices will rise, wages will fall, and human welfare will be reduced, not increased. We will be poorer and fewer people will be able to find jobs.

Common sense says that continuously increasing population makes it harder to keep everyone employed, not easier. The problem is not too few jobs; it’s too many people. There are already too many people consuming too much and diminishing the earth’s long-run carrying capacity.  Economic growth is running into the wall of limited resources on a finite planet. The trends created by economic growth and population growth include higher carbon emissions and climate change, loss of forests, depleted fisheries, soil erosion, species extinctions, toxic contamination, and the possible negative effects of technologies like fracking and genetically modified foods. The path the world is on — economic and population growth — is just as unsustainable as the subprime mortgage market and trillion-dollar federal deficits and will lead to collapse.

Do the arithmetic, starting with this year’s federal deficit, the short crop in the Corn Belt, the number of Americans in jail, and cuts to education budgets. Growth has not been the path to full employment or deficit reduction. If Romney was right about tax cuts, we wouldn’t have a federal debt crisis. If Clinton was right about population growth, we wouldn’t have unemployment. It’s time to try something beyond politics as usual.

Max Kummerow has a Ph.D. in urban and real-estate economics. This semester he is a visiting lecturer at Lincoln University in Canterbury, New Zealand. 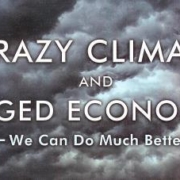 War and Peace and the Steady State Economy
2 replies

Selecting “Surrogate Species” for Conservation: How About an 80...

A Practical Proposal to Erase Externalities
Scroll to top
$