About the author: Dr. Roberts was educated at Georgia Tech, University of Virginia, UC Berkeley, and Oxford University. He was Assistant Secretary of the U.S. Treasury in the Reagan Administration, associate editor and columnist for the Wall Street Journal, Senior Research Fellow at the Hoover Institution, Stanford University, and holder of the William E. Simon Chair in Political Economy at Georgetown University. His honors include the U.S. Treasury’s Meritorious Service Award and France’s Legion of Honor. 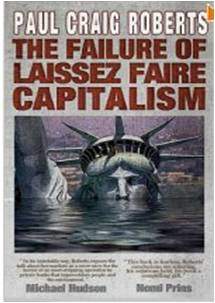 The Failure of Laissez Faire Capitalism

As evident from this description, Paul Craig Roberts writes from a very solid establishment background in academic political economy, financial journalism, and high public office. His radical critique of today’s economics and public policy will no doubt be surprising to some, but it is based on impressive knowledge and experience, as well as irresistibly convincing honesty. He did not inherit his present understanding of political economy but developed it through study and experience with openness to the persuasive power of facts and willingness to question economic dogmas of both the right and the left.

The book is of special interest to ecological economists, not only for the explicit and insightful support his reasoning gives us but also for the larger financial and political context in which he places steady-state economics. Although written mainly from a U.S. perspective, the book includes a very clear and informative explanation of the European crisis.

Perhaps the best way to whet the prospective reader’s appetite is to reproduce the brief conclusions with which the book ends and testify that the rest of the book solidly supports these conclusions by clear reasoning from relevant facts:

This book demonstrates that empty-world economic theory has failed on its own terms and that its application by policymakers has resulted in the failure of capitalism itself. Pursuing absolute advantage in cheap labor abroad, First World corporations have wrecked the prospects for First World labor, especially in the US, while concentrating income and wealth in a few hands. Financial deregulation has resulted in lost private pensions and homelessness. The cost to the US Treasury of gratuitous wars and bank bailouts threatens the social safety net, Social Security and Medicare. Western democracy and civil liberties are endangered by authoritarian responses to protests against the austerity that is being imposed on citizens in order to fund the wars and financial bailouts. Third World countries have had their economic development blocked by Western economic theories that do not reflect reality.

All of this is bad enough. But when we leave the empty-world economics and enter the economics of a full world, where nature’s capital (natural resources) and ability to absorb wastes are being exhausted, we find ourselves in a worse situation. Even if countries are able to produce empty-world economic growth, economists cannot tell if the value of the increase in GDP is greater than its cost, because the cost of nature’s capital is not included in the computation. What does it mean to say that the world GDP has increased four percent when the cost of nature’s resources are not in the calculation?

Economist Herman Daly put it well when he wrote that the elites who make the decisions ‘have figured out how to keep the benefits for themselves while ‘sharing’ the cost with the poor, the future, and other species.’[1]

Empty-world economics with its emphasis on spurring economic growth by the accumulation of man-made capital has run its course. Full-world economics is steady-state economics, and it is past time for economists to get to work on a new economics for a full world.[2]