In one version of the legend of King Canute’s failed attempt to stem the rising tide by lashing the sea, he told the assembled crowd of flatterers, “[l]et all men know how empty and worthless is the power of kings, for there is none worthy of the name, but He whom heaven, earth and sea obey by eternal laws.” 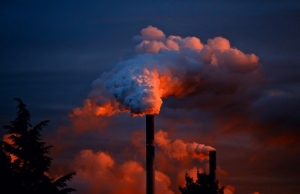 The Canutist State refers to governments that acknowledge climate change and try to stabilize its effects, but essentially do nothing, such as burning carbon. (Image: CC0, Credit: JuergenPM).

In this version, Canute staged the attempt to control the tide in order to discredit the lying sycophants who kept telling him that he was all-powerful and therefore could do anything that they wanted him to do. But popular history, immune to subtlety, has portrayed Canute as really believing that the sea would obey him. Hence the term “Canutist State” has been used to refer to governments that try to mandate climate stability without burning less carbon, grow forever in a finite and entropic world, and abolish poverty without sharing. It would be more just to Canute if the term “Canutist State” referred to a wise government that constrained the ignorant attempts of its businessmen and economists to grow forever. With apologies to the wise King, I will perpetuate this injustice because the image of a stupid government serving business interests by trying to countermand nature’s laws is such an apt description of what is happening today that we need a name for it.

The Canutist State wants, in the words of one of its big boosters, IBM, to “build a smarter planet“—one that is “smart” enough to obey our mindless command to keep growing. The real Canute would not try to build a smarter planet (by geo-engineering, genetic engineering, globalization, quantitative easing, etc.), any more than he really tried to command the tide. He would have tried to build a smarter kingdom populated by wiser subjects and thrown his growth-manic economic advisors into the dungeon. He would have said, “[l]et’s make a smarter adaptation to the wonderful gift of the Earth, out of which we were created and with which we have evolved.”

It would be tempting to emulate Canute’s strategy by putting the growth-manic advice to the test and watching it publicly fail. That would be very costly, but in a way, it is exactly what is happening, although not by design. Unfortunately, the failures are attributed to insufficient growth rather than to the stupidity of the priestly economic advisors who inhabit palaces rather than dungeons. Their policy is to lash nature even harder with the whip of mega-technology until it gives us what we want—usually accompanied by a lot of “unforeseen consequences” that we certainly do not want.

Book Review: The Failure of Laissez Faire Capitalism and the Economic Dissolution of the West by Paul Craig Roberts

To Change the Global Economy, Start by Changing the Olympics