Frederick Soddy (1877-1956) discovered the existence of isotopes and was a major contributor to atomic theory, for which he received the Nobel Prize in Chemistry in 1921. He foresaw the development of an atomic bomb and was disturbed by the fact that society often used the contributions of science (for which he was partly responsible) for such destructive purposes. The reason for this was, in his view, faulty economics. So, in the second half of his 80 years, he set out to reform economics. He was the first person coherently to lay out the policy of 100 percent reserve banking, later taken up by the Chicago School economists and by Irving Fischer of Yale—and still an excellent idea. Soddy was considered an outsider and a “monetary crank” by mainstream economists. Nevertheless, his views on money are sound and highly relevant to today’s financial debacle. Another neglected but increasingly relevant contribution is his philosophical vision of the place of economics in the larger intellectual map of the world.

For Soddy, economics occupies the middle ground between matter and spirit, or as he put it, “between the electron and the soul”:

In each direction possibilities of further knowledge extend ad infinitum, but in each direction diametrically away from and not towards the problems of life. It is in this middle field that economics lies, unaffected whether by the ultimate philosophy of the electron or the soul, and concerned rather with the interaction, with the middle world of life of these two end worlds of physics and mind in their commonest everyday aspects, matter and energy on the one hand, obeying the laws of mathematical probability or chance as exhibited in the inanimate universe, and, on the other, with the guidance, direction and willing of these blind forces and processes to predetermined ends.[1]

Soddy did not mean that economists should neglect the two end worlds of electron and soul—much to the contrary he insisted that wealth must reflect the independent reality of both end worlds. What must be resisted is the “obsessive monism” of either idealism or materialism. We must recognize the fundamental dualism of the material and the spiritual and resist attempts to reduce everything to one or the other.

Wealth has both a physical dimension, matter-energy subject to the laws of inanimate mechanism, especially the laws of thermodynamics, and a teleological dimension of usefulness, subject to the purposes imposed by mind and will. Soddy’s concept of wealth reflects his fundamental dualism and is why his first lectures on economics were entitled Cartesian Economics, meaning in effect, “Dualist Economics” (not, as might be imagined today, economics diagrammed in terms of Cartesian coordinates). The subtitle of Cartesian Economics, “The Bearing of Physical Science on State Stewardship,” better reflects his dualism in the contrast between “physical science” and “stewardship.” 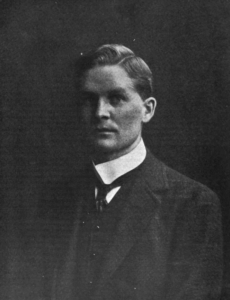 Soddy was a Nobel Prize-winning Chemist who foresaw the destructive nature of science and sought to reform economics. (Image: CCO, Credit: WikiCommons)

Philosophically, Rene Descartes accepted dualism as a brute fact even though the interaction of the two worlds of mind and matter, of soul and body, of res cogitans and res extensa, remained mysterious. Subsequent philosophers have in Soddy’s view succumbed to monistic reductionism, either materialism or idealism, both of which encounter philosophical problems no less grave than dualism, as well as provoke greater offenses against both common sense and direct experience. It is fashionable to reject dualism nowadays by saying that humans are a “psychosomatic unity” even while recognizing a “polarity” within that unity. Nevertheless, the two poles of electron and soul are very far apart, and the line connecting them is, as Soddy argued, twice discontinuous. While we are surely in some important sense a “unity,” it would be good to recognize the legitimate claims of dualism by writing the word “psycho—somatic” with a long double hyphen.

Soddy’s view can be represented by a vertical line connecting the electron (the physical world, useful matter-energy, ultimate means) at the bottom, to the soul (will, purpose, ultimate end) at the top. In the middle is economics (efforts in ordinary life to use ultimate means to serve the ultimate end). Soddy did not draw such a diagram, but it is implicit in his writing. The vertical connecting line has two mysterious discontinuities that thwart monistic attempts to derive soul from electron, or electron from the soul. The first discontinuity is between inanimate mechanisms and life. The second discontinuity is between life and self-conscious mind (will, soul). Monists keep trying, and failing, to leap over both chasms. Dualists accept them as irreducible brute facts about the way the world is.

Dualists use the axiom of duality to interpret other phenomena instead of vainly pursuing the illusion of reductive monism. Nowadays the dominant monistic obsession is materialism, supported by the impressive successes of the physical sciences, and the lesser but still impressive extrapolations of Darwinist biologism. Idealism does not have so much support at present, although modern theoretical physics and cosmology seem to be converting electrons and elementary matter into mathematical equations and strange Platonic ideas that reside more in the minds of theoretical physicists than in the external world, thus perhaps bending the vertical line connecting mind and matter into something more like a circle. Also, a Whiteheadian interpretation of the world as consisting most fundamentally of “occasions of experience” rather than substances, is a way to bridge dualism, but only with the help of widely separated and mysteriously combined “polarities” of mentality and physicality posited or anticipated in each occasion of experience. While these are challenging and important philosophical developments, it remains true that materialism currently retains the upper hand and is claiming an ever-expanding monistic empire, including the middle ground of economics. In addition, physics’ modern revival of idealism so far seems morally vacuous—among the equations and Platonic ideas of modern physics one does not find ideas of justice or goodness or even purpose, so the fact-value dimension of dualism remains.

As Soddy insisted, economics occupies the middle ground between these dualistic extremes. Economics in its everyday aspects remains largely “unaffected whether by the ultimate philosophy of the electron or the soul,” but this may be the big weakness of economics, myopia that leads to its growth-forever vision. Each end world reflects unrecognized limits back toward the middle world—limits of possibility from below, and limits of desirability from above. Economics seems to assume that if it is possible it must be desirable, indeed practically mandatory. Similarly, if it is desirable it must be possible. So everything possible is considered desirable, and everything desirable is considered possible. Ignoring the mutually limiting interaction of the two end worlds of possibility and desirability has led economists to assume a permissiveness to the growth of the middle world of the economy that is proving to be false. For Soddy, this is reflected concretely in the economy by our monetary conventions—fractional reserve banking, which allows alchemical creation of money as interest-bearing private debt: “You cannot permanently pit an absurd human convention, such as the spontaneous increment of debt [compound interest], against the natural law of the spontaneous decrement of wealth [entropy].[2]

Debt is confused with wealth. But unlike debt, wealth has a physical dimension that limits its growth. This reflects mainly a misunderstanding of the physical world and its limits on wealth. But Soddy also saw limits coming from the end world of the soul: “Just as I am constrained to put a barrier between life and mechanism in the sense that there is no continuous chain of evolution from the atom to life, so I put a barrier between the assimilation and creation of knowledge.”[3]

For Soddy, the assimilation of knowledge was mere mimicry and was discontinuous with the creation or discovery of new knowledge, which he saw as also involving a spiritual top-down influence from the soul, from the mysteriously self-conscious mind that could not be derived from mere animate life by a continuous chain of evolution. Soddy said little about the life-mind discontinuity relative to the matter-life discontinuity, but it was clearly part of his philosophy, and has come to the fore in modern philosophical debates about the “hard problem of consciousness.”

To the mechanistic biologists, who were already around in his day, Soddy had the following barbed comment:

I cannot conceive of inanimate mechanism, obeying the laws of probability, by any continued series of successive steps developing the powers of choice and reproduction any more than I can envisage any increase in the complexity of an engine resulting in the production of the “engine-driver” and the power of its reproducing itself. I shall be told that this is a pontifical expression of personal opinion. Unfortunately, however, for this argument, inanimate mechanism happens to be my special study rather than that of the biologist. It is the invariable characteristic of all shallow and pretentious philosophy to seek the explanation of insoluble problems in some other field than that of which the philosopher has first hand acquaintance.[4]

To generalize a bit, monists, who deny the two discontinuities, seek to solve the insoluble problems that they thereby embrace, by shallowly and pretentiously appealing to some other field than that of which they have first-hand experience. This is a serious indictment—is it true? I will leave that question open, but will note on Soddy’s behalf that regarding the matter-life discontinuity, Francis Crick evidently thought it more likely that first life arrived from outer space (directed panspermia) than that it formed spontaneously from inanimate matter on earth, given the demonstration by Pasteur and Tyndall that “spontaneous generation is not occurring on the earth nowadays.” And, as already mentioned, a number of philosophers and neuroscientists (including John Eccles and Karl Popper) have declared that the life-mind discontinuity presents “the hard problem of consciousness” judged by many to be unbridgeable.

The relevance of Soddy’s dualistic economics to steady-state economics is that there are two independent sets of limits to growth: the bottom-up biophysical and the top-down ethical-economic. The biophysical limit says real GDP cannot grow indefinitely; the ethical-economic limit says that beyond some point GDP growth ceases to be worth what it displaces, although it may still be bio-physically possible. Certainly, Soddy did not speak the last word on dualism versus monism. Nevertheless, he was truly a pioneer in ecological economics, seen as the middle ground between the electron and the soul. Although no ecological economist has won the ersatz “Swedish National Bank’s Memorial Prize in Economics in Honor of Alfred Nobel,” pioneer ecological economist, Frederick Soddy, has the distinction of having won a real Nobel Prize in chemistry. That doesn’t mean that he is right about dualist economics, but I think it earns him a serious hearing.

The Hidden Door
Scroll to top
$