Foreword to Enough Is Enough: Building a Sustainable Economy in a World of Finite Resources by Rob Dietz and Dan O’Neill (published by Berrett-Koehler in the U.S. and Earthscan in the U.K.) 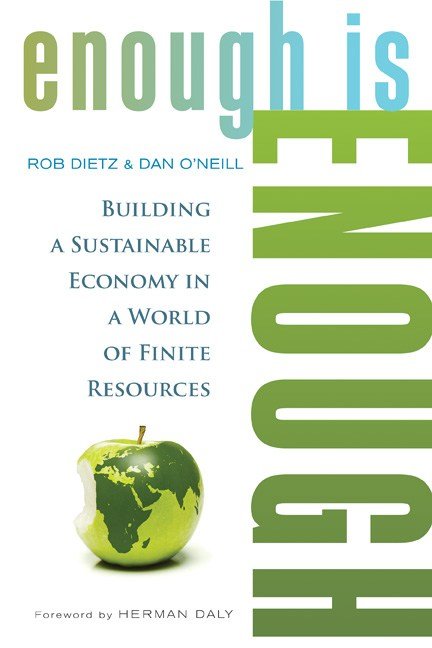 Enough is Enough: Building a Sustainable Economy in a World of Finite Resources

I have long wanted to write a book on the subject of “enough” but never did. Now I don’t have to because Rob Dietz and Dan O’Neill have done it in a clearer and more accessible way than I could have. Therefore, it is a special pleasure for me to write a foreword calling attention to their important contribution.

Enough should be the central concept in economics. Enough means “sufficient for a good life.” This raises the perennial philosophical question: What is a good life? That is not easy to answer, but at a minimum, we can say that the current answer to “having ever more” is wrong. It is worth working hard and sacrificing some things to have enough, but it is stupid to work even harder to have more than enough. And to get more than enough not by hard work but by the exploitation of others is immoral.

Living on enough is closely related to sharing, a virtue which today is often referred to as “class warfare.” Real class warfare, however, will not result from sharing, but from the greed of elites who promote growth because they capture nearly all of the benefits from it while “sharing” only the costs.

Enough is the theme of the story of God’s gift of manna to the ancient Hebrews in the wilderness. Food in the form of manna arrived like dew on the grass every morning and was enough for the day. If people tried to gather more than enough and accumulate it, it would spoil and go to waste. So God’s gift was wrapped up in the condition of enough—sufficiency and sharing—an idea later amplified in the Lord’s Prayer, “give us this day our daily bread.” Not bread for the rest of our lives or excess bread with which to buy whatever luxuries we may covet, but enough bread to sustain and enjoy fully the gift of life itself.

This story from Exodus has parallels in the thoughts of pioneer ecological economist and Nobel Prize-winning chemist, Frederick Soddy. Soddy observed that humanity lives off the revenue of current sunshine that is gathered each day by plants with the aid of soil and water. Unlike manna, some of the sunshine was accumulated and stored by geologic processes, and we have consumed it lavishly with mixed results. Today, we also try to accumulate surplus solar income and exchange it for a permanent lien on future solar income. We then expect this surplus, converted into debt in the bank, to grow at compound interest. But the future solar-based revenue, against which the debt is a lien, cannot keep up with the mathematics of exponential growth, giving rise to debt repudiation and depression.

For the Hebrews in the wilderness, the manna economy was designed with “enough” as a built-in feature. Our economy does not have that automatic regulation. We have to recognize the value of enough and build it into our economic institutions and culture. Thanks to Dietz and O’Neill for helping us do that.

Rio+20 Needs to Address the Downsides of Growth
4 replies

Confessions of a Closet Football Fan
Scroll to top
$