Right now “economics” means “neoclassical economics,” especially in the halls of government and business boardrooms.  At the same time, ecological economics remains an under-appreciated and under-utilized sub-discipline of economics. To reverse this situation, such that when people talk about economics, they’re talking about ecological economics, we need to address the three factors described in Part 1 of The Triumph of Fantasy over Science:

Countermeasure 1. Frame the limits to growth and ecological economics in a way that prevents people from feeling threatened.

For decades, the denizens of Science Camp have been broadcasting messages about the shortcomings of neoclassical economics and the problems posed by its obsession with growth. To a lesser degree, they have also been promoting ecological economics (and its focus on well-being) as a positive alternative. But to bypass protective cognition — the defense mechanism that allows people to accept faulty premises — Science Campers need to frame their ideas differently.

Many people, when confronted with the possibility that the economic paradigm they’ve embraced may be harming society and causing significant environmental damage, react defensively. I know that I’ve been called all sorts of names (even the “C” word — communist) for presenting an alternative economic view. The key to disarming the defensiveness that comes along with protective cognition is to focus the conversation on needs that all people share (e.g., subsistence, security, and participation) and how an ecological economy can meet these needs without growth. Such framing can dampen denial and open minds.

For example, one time I was part of an “economic vitality” team tasked with providing ideas to a city council about how to achieve a prosperous local economy. The team included a sustainability guru, a business owner, a representative of the Chamber of Commerce, and a banker, among others. In one of our first meetings, I gave my standard spiel about the difference between a prosperous economy and a growing one. Since it was a small group seated around a table, I could see right away the misgivings some of my teammates had about my ideas. The banker must have set the world record for quantity of disapproving head shakes. We ended up butting heads for the next several meetings until I tried a different approach. I drafted a short document about our “areas of agreement,” which focused on the city’s needs. By steering the conversation toward things we all hoped to achieve in the city’s economy, such as available jobs, meaningful work, sufficient infrastructure, healthy ecosystems, and local production and consumption, we were able to have a constructive discussion and develop useful strategies for the city.  Once the walls of protective cognition have been toppled, people can access their considerable capacity for logic when assessing policy options.

Countermeasure 2. Use student demand to supplant neoclassical economics in universities. 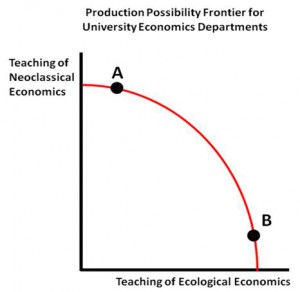 Since this countermeasure focuses on university economics, let’s use a couple of standard economic graphs. First let’s consider the production possibility frontier for teaching in economics departments (see graph). An economics department can offer only a certain amount of economics courses, defined by the production possibility frontier. If it is spending that “certain amount” on neoclassical economics, then it can teach very little ecological economics. The goal is to move along the curve from point A (where we currently reside) to point B where we want to be. 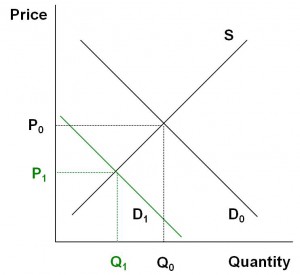 If students decrease their demand for neoclassical economics, then the quantity supplied will decrease.

For example, Adbusters started a campaign called Kick It Over that invites students around the world to join the fight to revamp Econ 101 curricula and challenge the myopic views of neoclassical professors. Another outstanding effort is Kate Raworth’s work with Oxfam on the “doughnut economy.” Raworth is trying to unseat neoclassical orthodoxy and replace it with an economic framework based on meeting society’s needs within nature’s limits. Besides offering a sound premise for structuring the economy, she suggests that students engage in a guerilla campaign to rewrite economics textbooks.

As students decrease their demand for neoclassical economics, casting it into the dustbin of obsolescence, economics departments will move along their production possibility frontier to point B where their core will become ecological economics. At that point professors will focus their research on how to achieve sustainable and equitable well-being, and new generations of students will be grounded in the principles of Science Camp.

Rob Hopkins, the founder of the Transition Towns movement has poked fun at the standard Science Camp story. He says, “Environmentalists have often been guilty of presenting people with a mental image of the world’s least desirable holiday destination — some seedy bed and breakfast… with nylon sheets, cold tea and soggy toast — and expecting them to get excited about the prospect of NOT going there. The logic and the psychology are all wrong.” We need to tell a more inspiring story about the transition to a steady-state economy.

That’s exactly what CASSE authors have been up to, and two new books will be available in early 2013.  Enough Is Enough (by Dan O’Neill and me) and Supply Shock (by Brian Czech) will serve as a one-two punch to knock out the neoclassical obsession with growth. These two books can accompany the ecological economics textbook by Herman Daly and Joshua Farley to provide options for new economics courses along the path from point A to point B on the production possibility frontier.  As more such books and resources come out of Science Camp, professors, politicians, and pundits will have fewer excuses for remaining in Fantasy Camp.

From reframing to organizing, from protesting to storytelling, there’s a lot of work to do to get past the collective mental block and start walking a sustainable economic path. For decades, we’ve shown ourselves to be incapable of accepting facts, unable to modify failing social institutions, and unwilling to adjust our lifestyles. But now is the time to overthrow the academic programs and economic institutions that got us into this mess in which we undervalue our most important assets. Now is the time to tell the story of ecological economics — the hopeful story of long-term prosperity on a healthy planet. Now is the time to demand the economy that we want and that the planet needs.

The Triumph of Fantasy over Science, Part 1

A Question of Scarcity

Happiness and the COVID-caused Recession
2 replies

The Resilience Imperative and Civil Disobedience
Scroll to top
$