The day following Thanksgiving Day in the United States is called Black Friday. For retailers the day marks the beginning of the Christmas shopping season. While the origin of the term is debated, it is today associated with special sales and extraordinary promotions that retailers use to induce shoppers into spending the holiday weekend on a shopping spree.

Our modern economy is structured such that its stability depends upon ever increasing consumer spending. In my first economics course in college in 1961, the professor told the class to go out and shop because it is good for the gross national product (GNP). Then and now, mainstream economics continues to treat the Earth as if it were a business in a liquidation sale.

At a time of high unemployment in the United States, it may seem like an act of madness to question the growth economy, but relentless pursuit of growth has failed to deliver again and again on the promise of economic stability and security. Its recipes are not making people any happier, and it is undermining the ecological life support systems of our planet. It has failed about one third of the world’s population who live on less than $2 per day, while simultaneously producing an exclusive club of gratuitously wealthy individuals. Those of us advocating a steady state economy seek a new way to maintain full employment that does not incentivize employers to seek dirt-cheap labor or to replace people with machines.

Professor Tim Jackson’s 2009 report to the UK Sustainable Development Commission entitled Prosperity without Growth provides an outstanding foundation for any discussion of consumerism and the growth economy. For those interested in a steady state economy, it is worthwhile to think in this holiday season about the nature of shopping in such an economy.

Throughout history religious leaders have expressed concerns about the accumulation of stuff. Two thousand years ago Jesus cautioned about excessive attention to material possessions, saying: “Lay not up for yourself treasures on earth where moth and rust doth corrupt and where thieves break through and steal.”

Over 100 years ago the economist and philosopher John Stuart Mill recognized that eventually humanity would have to move toward a stationary state of capital and wealth, but that condition need not entail a stagnation of human improvement.

Two centuries ago the poet William Wordsworth expressed alarm at the consumerism he witnessed in England: “The world is too much with us, late and soon. Getting and spending we lay waste our powers. Little we see in nature that is ours. We have given our hearts away…”

Today’s economy is five times bigger than in the 1950s, and at current growth rates stimulated by commercial promotions, it is headed to a global economy 80 times as large.

The consumer rampage is in part fueled by slick advertising for novel consumer products, and much of this advertising is targeted at youth. Ralph Nader questions who is watching what young people worldwide are being enticed to buy? He writes: “Undermining parental authority with penetrating marketing schemes and temptations, companies deceptively excite youngsters to buy massive amounts of products that are bad for their safety, health and minds.”

Excessive packaging accompanying today’s products attracts ecological criticism, but it is only the tip of the iceberg in terms of waste. The volume of raw resource extraction required in the manufacture of products dwarfs the packaging waste. For example, many mining operations for valuable metals leave behind as waste over 90% of the material excavated, and such rocky rubble often releases a mass of toxicity onto the land and into the water.

Has happiness been improved by having all these products? Studies over the past two decades have suggested that a certain amount of material comfort and ease provided by various products increases one’s happiness, but beyond a certain point – one study suggested $75,000 income – more stuff doesn’t produce more happiness. In fact, it can yield the perverse result of adding stress, worry and depression.

It is amazing that times of holiday celebration in the United States are frequently the very times of peak stress. What should be a fun and cheerful experience becomes a week or even a month of worry.

The holiday season is a good time to reexamine the kinds of purchases we make to see whether they are reducing the use of natural resources and encouraging more sustainable ways of growing food and conducting commercial business.

Many religious congregations are looking toward a different approach to reclaim the holidays from preoccupation with material gifts. Some offer ways to reduce the volume of purchasing and to make different kinds of purchases that reduce throughput and pollution.

By voting with their food dollars many Americans have already sent powerful signals in favor of local farm markets and organic food. With some due diligence, people can determine whether their purchases lend further support to child labor and slave conditions, whether the purchases harm women or empower women, and whether the product came from an animal-slum factory farm operation. The Fair Trade label allows consumers to identify imported products that avoid harmful labor and environmental degradation in their manufacture.

We have options.  We can do better than liquidating our natural bounty for consumer novelty, we can refrain from pitching unnecessary products to our children, and we can stop pursuing growth for growth’s sake.  The steady state economy is a better choice than continuous pursuit of economic growth, but the transition starts with better choices about what and how we consume. 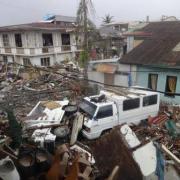 A New View of Work
5 replies

A Shift in the Burden of Proof
Scroll to top
$