The USA and Western Europe are in a recession threatening to become a depression as bad as that of the 1930s. Therefore, we look to Keynesian policies as the cure, namely stimulate consumption and investment—that is, stimulate growth of the economy. It seemed to work in the past, so why not now? Should not ecological economics and steady-state ideas give way to Keynesian growth economics in view of the present crisis? 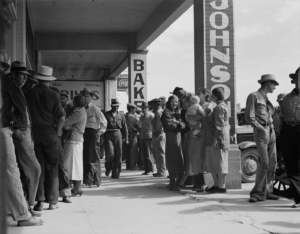 The solution to the Great Depression of the 1930s was the growth of the economy. Today, however, growth is no longer the solution but the ultimate goal, despite the warning signs that it is biophysically impossible. (Image: CC0, Credit: Dorothea Lange).

Certainly not! Why? Because we no longer live in the empty world of the 1930s—we live in a full world. Furthermore, in the 1930s, the goal was full employment and growth was the means to it. Nowadays, growth itself has become the goal and the means to it are off-shoring of jobs, automation, mergers, union-busting, importing cheap labor, and other employment-cutting policies. The former goal of full employment has been sacrificed to the modern ideology of “growth in shareholder value.”

Growth has filled the world with us and our products. I was born in 1938, and in my lifetime world population has tripled. That is unprecedented. But even more unprecedented is the growth in populations of artifacts—”our stuff”: cars, houses, livestock, refrigerators, TVs, cell phones, ships, airplanes, etc. These populations of things have vastly more than tripled. The matter-energy embodied in these living and nonliving populations was extracted from the ecosystem. The matter-energy required to maintain and replace these stocks also comes from the ecosystem. The populations or stocks of all these things have in common that they are what physicists call “dissipative structures”—i.e., their natural tendency, thanks to the entropy law, is to fall apart, to die, to dissipate. The dissipated matter-energy returns to the ecosystem as waste, to be reabsorbed by natural cycles, or accumulated as pollution. All these dissipative structures exist in the midst of an entropic throughput of matter-energy that both depletes and pollutes the finite ecosphere of which the economy is a wholly contained subsystem. When the subsystem outgrows the regenerative capacity of the parent system, then further growth becomes biophysically impossible.

But long before growth becomes impossible it becomes uneconomic—it begins to cost more than it is worth at the margin. We refer to growth in the economy as “economic growth,”—even after such growth has become uneconomic in the more basic sense of increasing illth faster than wealth. That is where we are now, but we are unable to recognize it.

Why this inability? Partly because our national accounting system, GDP, only measures “economic activity,” not true income, much less welfare. Rather than separate costs from benefits and compare them at the margin we just add up all final goods and services, including anti-bads (without subtracting the bads that made the anti-bad necessary). Also, depletion of natural capital and natural services are counted as income, as are financial transactions that are nothing but bets on debts, and then further bets on those bets.

Also, since no one wants to buy illth, it has no market price and is often ignored. But illth is a joint product with wealth and is everywhere: Nuclear wastes, the dead zone in the Gulf of Mexico, gyres of plastic trash in the oceans, the ozone hole, biodiversity loss, climate change from excess carbon in the atmosphere, depleted mines, eroded topsoil, dry wells, exhausting and dangerous labor, exploding debt, etc. Standard economists claim that the solution to poverty is more growth—without ever asking if growth still makes us richer, as it did back when the world was empty and the goal was full employment, rather than growth itself. Or has growth begun to make us poorer in a world that is now too full of us, and all our products, counted or not in GDP? 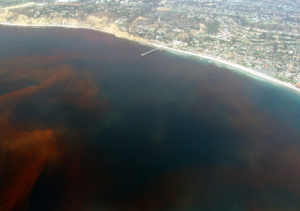 Illth, a negative consequence of production, is a product of wealth and shows up in the form of nuclear waste, dead zones, eroded topsoil, etc. (Image: CC0, Credit: Intersofia).

Does growth now increase illth faster than wealth? This is a threatening question because if growth has become uneconomic, then the solution to poverty becomes sharing now, not growth in the future. Sharing is frequently referred to as “class warfare.” But it is really the alternative to the class warfare that will result from the current uneconomic growth in which the dwindling benefits are privatized to the elite while the exploding costs are socialized to the poor, the future, and to other species.

Finally, I eagerly submit that even if we limit quantitative physical throughput (growth), it should still be possible to experience qualitative improvement (development) thanks to technological advances and to the ethical improvement of our priorities. I think therefore we should urge policies to limit the quantitative growth of throughput, thereby raising resource prices in order to increase resource efficiency, to force the path of progress from growth to development, from bigger to better, and to stop the present folly of continuing uneconomic growth. A policy of quantitative limits on throughput (cap-auction-trade) will also block the erosion of initial resource savings resulting from efficiency improvements (the rebound effect or Jevons paradox). In addition, the auction will raise much revenue and make it possible to tax value added (labor and capital) less because in effect we will have shifted the tax base to resource throughput. Value-added is a good, so stop taxing it. Depletion and pollution, the two ends of the throughput, are bads, so tax them. If you are a technological optimist please have the courage of your convictions and join us in advocating policies that give incentive to the resource-saving technologies that you believe are within easy reach. You may be right—I hope you are. Let’s find out. If you turn out to be wrong, there is really no downside, because it was still necessary to limit throughput to avoid uneconomic growth.

The Financial Crisis Is the Environmental Crisis
8 replies