What does the Higgs boson have to do with the establishment of a sustainable economy? The discovery of this subatomic particle required a Herculean effort, involving billions of dollars, over 1,000 physicists, and thousands of craftsmen to construct and operate an almost incomprehensibly complex machine — the Large Hadron Collider. The same kind of diligent, prodigious effort is needed to construct and operate a new economic system for all nations of the world.

Physicist Lawrence Krauss, author of A Universe from Nothing, described the effort on the Higgs boson in ebullient terms:

…a triumph of technical and computational wizardry of unprecedented magnitude…

…the discovery will change our view of ourselves and our place in the universe. Surely that is the hallmark of great music, great literature, great art… and great science.

Amid such extraordinary hype, it’s worth asking what we have to show for finding the so-called God particle? Will this momentous discovery help solve any crucial economic, social, environmental, or political problems besetting societies today and even threatening the livability of the planet? Will we possess the “key to the universe” and still wreck the planet we depend on? 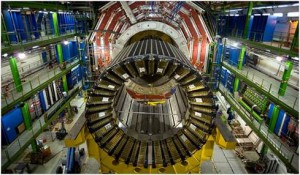 If we can build the LHC, there’s hope for the SSE.

The most urgent task for humanity is the focus of the Center for the Advancement of the Steady State Economy: a transformation of the existing world economy. Today’s global economy rewards the depletion of natural resources, promotes overuse of fossil fuels, drives huge numbers of species to extinction, and turns a blind eye on the destruction of the very ecosystems that make life possible.

The transformation required in this emergency situation was described by economist Kenneth Boulding roughly half a century ago — the same period when physicists were formulating hypotheses about mystery particles. The essential change, Boulding said, was a move from “cowboy economics” (the unsustainable economics of continuous growth and resource overexploitation) to “spaceship economics” (the sustainable economics of the steady state).

Scientists specializing in ecosystem health warn that Earth is like a patient in the emergency room needing CPR — conservation, preservation, and restoration. The latest climate science reveals alarming physical changes to the planet — changes that are even more disturbing than the warnings issued in the big 2007 report of the Intergovernmental Panel on Climate Change (IPCC). Here are a few such changes:

We need a Herculean effort on both economic and ecological fronts to deal with climate destabilization. How many ecological economists are at work on a redesign of the global economy? What about the paucity of scientists who study the variety of life and the functioning of ecosystems? We do not know if there are 10 million species on Earth or 50 million.

In contrast, consider the stupendous volume of data being gathered by the supercollider. Dr. Krauss reports that this collider generates more data every second than the information in all the world’s libraries. The physicists got the billions they needed, but only a little progress has been made in developing spaceship economics. In fact, mainstream economics is reinforcing both the cowboy and casino thinking that is gripping most economies on Earth.

Physicists did not face a slick disinformation campaign funded by oil companies. Surely the job of rescuing our planet from an untimely demise should rank high in the funding priorities. Lester Brown estimates that $200 billion a year — less than a fifth of the world’s defense department budgets — is needed to shift to a clean-energy economy and do the CPR that planet Earth desperately needs.

“Steady State Economy” — a Positive Vision in International... The Triumph of Fantasy over Science, Part 1
Scroll to top
$