Suppose you’re suspicious of the idea of pursuing continuous economic growth on our finite planet. What if you’ve even concluded that an obsession with increasing production and consumption might be a bad thing, especially in the wealthy nations (apparently you’ve been connecting some dots between economic growth and the calamitous combination of climate change, resource depletion, poverty, and inequality)? Having come to such a conclusion leads to a critical question: how would a non-growing economy function? I’ve been thinking about steady state economics most days for the last six years, and I’ve even written a book on the subject, but I still struggle with this question. When in doubt, consult Herman Daly.

Daly has articulated three logical rules that a steady state economy would live by:

Presuming we can accurately determine depletion and regeneration rates, as well as the resilience of ecosystems, we can use two basic strategies to follow the steady state rules: (1) economizing and (2) innovating. Economizing boils down to reducing the inputs used in economic activities and minimizing the waste outputs. It entails conserving, re-using, maintaining, and generally embracing the wisdom of enough rather than succumbing to the madness of more. Innovating entails doing things more efficiently. It means learning, inventing, adapting, and using appropriate technologies to achieve desired ends. Note that innovation (and the increased efficiency it engenders) is a double-edged sword. In a non-growing economy, increased efficiency can reduce environmental impacts, but in a growing economy, increasing efficiency tends to cause a rebound effect that actually increases environmental impacts. A steady state economy, therefore, will adopt some combination of economizing and innovating to achieve sustainability.

This is all well and good, but terms like “economizing” and “innovating” fall short of painting a detailed picture of day-to-day life in a steady state economy. To paint such a picture, it’s helpful to start with a smaller canvas — that is, focus on a specific sector rather than the entire economy.

The transportation sector of the U.S. economy accounts for about 3% of gross domestic product. The purpose of this sector is to move people and goods to desired destinations. To accomplish this purpose while abiding by the steady state rules requires: 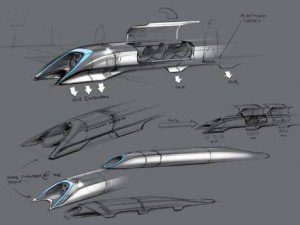 Wouldn’t it be easier (and more practical) to construct some decent bike lanes?

Think tanks like the Post Carbon Institute and the Transition Towns Network provide “economizing” strategies for doing these sorts of things. One of the big ideas is economic localization, which diminishes the need for long-distance transportation by eliminating unnecessary trade. As Daly has pointed out, “Americans import Danish sugar cookies, and Danes import American sugar cookies. Exchanging recipes would surely be more efficient.” The more a community can produce goods and services locally, the less it has to rely on long supply chains and importation of goods from afar. As a bonus, localization curtails the need for workers to undertake long-distance commutes, since the local economy would provide more employment opportunities. Other ideas for economizing in the transportation network include deemphasizing the automobile (World Carfree Day is coming up soon) while promoting walking, bicycling, and transit; paying more attention to neighborhood design; implementing car share programs; and even making more use of sailboats. High parking fees and gasoline taxes are also tools that can curtail the quantity of resources consumed for getting around.

Think tanks also promote plenty of ideas that take the “innovating” approach. The Rocky Mountain Institute suggests constructing ultra-light, low-drag autos and superefficient trucks and planes. The Sustainable Transportation Center at the University of California, Davis conducts research on hydrogen, biofuels, and other energy pathways toward a sustainable transportation infrastructure. And for science fiction fans, ideas about conveyor belt systems first put to paper by writers like H.G. Wells and Isaac Asimov can now be perused in patent descriptions. Even vacuum tubes are entering the discussion… transporter beams can’t be far behind!

It seems, then, that a transportation network in a steady state economy would involve a mix of infrastructure changes, technology changes, and behavioral changes that, in turn, would stem from a selection of policy changes. Given the scope of changes required, it’s still hard to get a handle on how things would turn out (and this is only one sector that represents 3% of the broader economy). Perhaps drilling down further would help.  Part 2 will give it a try.