Editor’s Note: the below has been modified and cross-posted from Mission Catalyst, Issue 4, 2014

I’ll never forget the privilege, maybe five years ago, of addressing a small, interdenominational group of faith leaders in Washington, DC. They’d asked me to talk about limits to economic growth and to give a synopsis of the steady state economy as an alternative to growth. We then went around the group, perhaps eight in all, and discussed the issues. One pastor, deep in thought, summarily theologized, “The steady state economy; now that’s the Kingdom of God.” I can hear it like it was yesterday.

The rest of the conversation isn’t quite so vivid. As a long-time advocate of the steady state economy, maybe I got too excited to focus, thinking of the possibilities with God on our side! Also, it’s not like the pastor (Episcopal as I recall) had a full-fledged steady-state theology developed, at least at the time. Macroeconomics is not something he or the rest of the group had thought much about, but they’d definitely taken an interest in protecting the environment, or “caring for Creation” as some like to say.

And yet, if there is a place for common sense in theology, there is plenty to suggest the pastor was right on track. Would anyone be driving a Hummer in the Kingdom of God? Or building a McMansion? Wearing a fur coat? Presumably the trappings of conspicuous consumption would seem more befitting of…you know, that other place.

The pastor knew something was awry with the quest for ever more. Striving for more and more stuff isn’t caring for Creation. Think, for example, what it means to life on earth–all of Creation–with economic growth as the primary policy goal of so many nations. If you were to list the causes of species endangerment, it would read like a Who’s Who of the economy. A proliferation of all such activities is hardly wise husbandry.

But to really assess the relationship or relevance of economic growth to the Kingdom of God, and prior to any thorough theological assessment, we must have a solid grasp of exactly what economic growth is. It’s not enough to make vague references to Hummers or ask, “What would Jesus drive?”

The phrase “in the aggregate” is actually quite important. Sometimes we hear confusing talk about “green jobs” and even “green growth.” It may well be that replacing oil wells with vast arrays of solar panels and wind towers provides different jobs than we had in the past and doesn’t result in as many carbon emissions. But that one development–replacing fossil fuels with renewable energy–is hardly economic growth. It’s a sectoral readjustment that may or may not accompany economic growth: increasing production and consumption of goods and services in the aggregate. If we do manage to generate enough power from renewable sources to have even more agriculture, mining, logging, ranching, milling, manufacturing, and service sectors all the way from transportation to entertainment, what happens to all the wildlife habitat?

The fact is, in the push for GDP growth, God’s creatures suffer. To put it in the technical terms of ecological economics, as the human economy grows, natural capital is reallocated out of the economy of nature and is converted into consumer goods and manufactured capital. How is that caring for Creation? The steady state economy–stabilized population and per capita consumption, in simplest terms–means a stable environment for all the other creatures.

A growing number of citizens and activists are taking note that pulling out all the stops for GDP growth isn’t making man any happier. It has even become popular in sustainability circles to discredit GDP, as if it’s a meaningless indicator. However, attacking GDP is like shooting the messenger, or shooting the metric to be more accurate. Yes, it is perfectly true and important to realize that GDP is not a measure of wellbeing, but GDP is a solid indicator of the size of an economy. Despite all the talk of “green growth,” real GDP (“real” meaning adjusted for inflation) cannot increase without more impact on the environment. 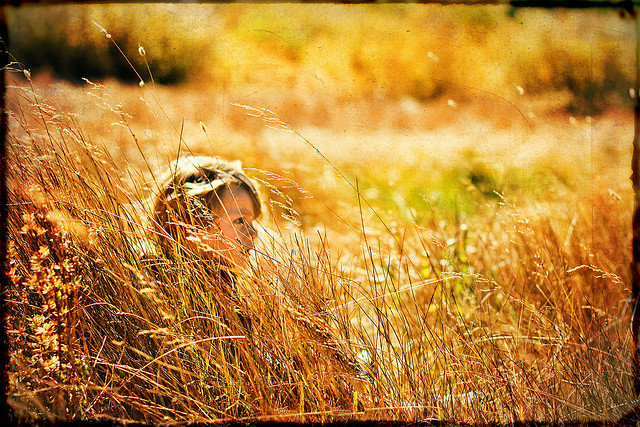 “All flesh is grass” in the Kingdom of God – and the human economy. Photo Credit: horizontal.integration

Here is where a bit of theology seems to dovetail nicely with biology. The Bible says, “All flesh is grass” (Isaiah 40:6). While the direct theological implication seems more about the insignificance of man on Earth, relative to God, this verse is more than mere metaphor. The fact is that the foundation of the “economy of nature,” or Creation, is indeed plants, or “grass” in the words of Isaiah. No plants, no animals: no grass, no flesh.

Meanwhile the book of Genesis says that God created mankind in his own image. It seems fitting, then, that the economy of man is like a microcosm of Creation, or the economy of nature. Man’s economy has producers (agricultural and extractive sectors), primary consumers (manufacturing), and secondary consumers including the purchasers of consumer goods and services in the market.

In order to have increasing production and consumption of goods and services in the aggregate, there must be more surplus produced at the base of the trophic structure. In other words, there must be more agricultural and extractive activity to free the hands for the division of labor into manufacturing, services, and “green” jobs. More and more money spent means more and more environmental impact; more erosion of the Creation.

Finally, no discussion of a steady state economy can be complete without the issue of population. Hopefully common sense suffices for understanding how we cannot have perpetual population growth on a finite planet. We humans aren’t like angels on the head of a pin. We have minimum material and energy requirements for survival.

My theology is amateurish at best, but isn’t the Kingdom of God supposed to lead to the final Kingdom of Heaven? It would seem that, at some stage, after life on Earth, the Kingdom of Heaven comes to its fruition of souls. So perhaps our good pastor was thinking ahead–way ahead–on the population front! Meanwhile, doing the best we can at caring for Creation entails serious efforts toward stabilizing our population as well as tempering our consumption.

It’s not easy advancing the steady state economy as the sustainable alternative to economic growth. If money is the root of all evil, we have a nasty force working against us: Big Money! The corporate forces in the world don’t want us talking about limits to growth or a steady state economy. They want governments pulling out all the stops for GDP growth.

On the other hand, they don’t exactly have the ultimate Commander in Chief on their side!

The New Economy versus Today’s Flat Earthers
Scroll to top
$