Here’s a crazy but true fact: negative externalities are the norm — not the exception — in our current economic setup. Failure to recognize this fact has created a wild divergence between theory and practice when it comes to managing harm caused by economic activity.

When I was a kid, my family took a one-week vacation each summer. In the middle of August, we always went to the same place — the beach at Nags Head, North Carolina. The trip was a yearly highlight, and I could always tell it was approaching by the heap of towels, beach toys, and fishing gear that would accumulate by the door that led to the garage. On the day of departure, my dad would come home early from work, and my sister and I would wedge ourselves into the backseat of the car, which was already close to full capacity on account of the cooler hogging half of the seat space and the bags of food and sundries on the floor.

I had to steel myself for the ten- to twelve-hour drive from Atlanta to Nags Head. Although fighting for real estate with my sister in the cramped backseat was bad, the boredom of highway travel was worse. But worst of all, both of my parents smoked — Marlboro Lights for mom and Dutchmaster cigars for dad. When one of them would light up, I’d let out an overly dramatic sigh and ask them to open the window. They’d comply by cracking the window ever so slightly, trying to maintain the air conditioner’s advantage in its battle against the late-summer heat of the South. The haze that hung inside the car made it seem like one of those “designated smoking areas” in an airport.

It was a rough journey, but it was well worth it. The Outer Banks of North Carolina held a mystical quality in my childhood mind. It was the land of endless waves, the Wright Brothers, towering dunes, and pirate stories, all steeped in the smells of salt air and sunscreen. When I was eleven years old, something happened to sweeten the deal. My father invited me to attend the early morning fishing expeditions with the men. That was hallowed ground. Prior to the invitation, I had been relegated to the inspection crew. I’d wait for the crusty fishermen to return at mid-morning from their trip to the secret fishing hole, and I’d rush to the car when they arrived to survey their catch, which often included speckled trout, croaker, flounder, red drum, bluefish, and spot.

That invitation was the start of improved relations between me and my dad. We developed a better understanding of one another through the easy conversations that fill the downtime during a slow morning of fishing. We also developed a shared attachment to place — a mostly unspoken appreciation for where we were and what we were able to do there. Like many other fathers and sons, I bonded with my dad during the simple act of throwing a line in the water and hoping to catch a fish.

I get visibly upset when I see a sign that warns about the dangers of eating a fish caught from a given body of water. A fish consumption advisory has an uncanny ability to launch me into a scathing diatribe. Really? Have we become so reckless and so complacent that we accept polluted waters and toxic fish — that our best course of action is to stick a warning sign in the ground?

These days I live near the banks of the Willamette River, which tumbles down from central Oregon’s Cascade Mountains and flows gently north to its confluence with the Columbia River in Portland. The Oregon Department of Human Services issues the following warnings about resident fish in the Willamette:

The agency issues these warnings because the fish store dangerous levels of mercury, PCBs, dioxins, and chlorinated pesticide residues in their bodies. Given one word to summarize why these fish are contaminated, I’d say, “externalities.”

N. Gregory Mankiw, a prominent professor of economics and textbook author, writes that an externality “arises when a person engages in an activity that influences the well-being of a bystander and yet neither pays nor receives any compensation for that effect” (Mankiw, Principles of Economics, Fourth Edition, p. 204). So a negative externality occurs when an economic activity produces harm, and the people suffering from that harm receive no compensation. A good synonym for “negative externality” is “side effect” — an unintended but unmitigated consequence.

Toxic fish in the Willamette River are the result of externalities from a host of economic activities, including mining, electricity production, farming, manufacturing, and urban development. These activities (at least the way we do them today) generate pollution, a cost that is externalized by the polluters, and that pollution finds its way into the river and into the bodies of the fish. As a result, I’m less inclined to fish in the Willamette, less inclined to take my daughter fishing there, and less likely to have the same bonding experience with her that I had with my dad.

The Theory for Managing Externalities

Economists tend to cast negative externalities as an unfortunate, but fixable, part of the market economy. The standard suggestion for fixing them is to impose taxes on externality-producing activities. For example, burning coal in a power plant causes mercury pollution. The cost of this mercury pollution is externalized by the power company and born by society (e.g., those of us who want to go fishing with our children). If the government places a tax on the amount of coal burned, the power company will burn less, and depending on the size of the tax, the government can force the power company to internalize the full costs associated with burning coal (assuming we can put a cost on the pollution, and that’s a BIG assumption).

Another possible fix is to arrange for the polluter to compensate those who bear the cost of the pollution. In the example of the power plant causing mercury pollution, the power company would pay compensation to my family (in theory, the compensation should be equal to the dollar amount at which my daughter and I value the experience of catching clean fish from a clean river). The compensation acts in the same way as the tax to internalize the costs for the polluter.  In an economics textbook, you’d see something like the following diagram, which shows how supply shifts in response to a tax. 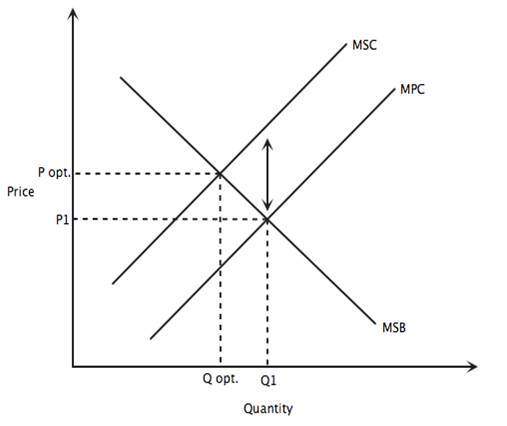 The theory sounds good, but it rarely makes its way into reality. In the market, as firms work to maximize their profits, they strive to maximize revenues while minimizing costs. A sure-fire way to minimize costs is to externalize as many of them as possible. In practice, if a corporation wants to minimize the costs of environmental protection, it can move its operation to a nation with lax environmental laws. It can do the same or find various “innovative” ways to avoid paying other costs, while passing them on to the rest of society. In the context of today’s economic game, this is a sound strategy. If the objective of the game is profit maximization, then a winning player will externalize as many costs as possible.

As corporations have gotten better and better at this game, they have accrued higher and higher profits, and gained more and more influence. This influence often extends into the legislative bodies and regulatory agencies that could, in theory, prevent the inefficiency and injustice associated with negative externalities. It has become politically challenging, to say the least, for a government to place an externality-correcting tax on a corporate activity.

What about the other path proposed by economists — the path of compensation? This path falls apart for several reasons when trying to make the leap from the classroom to the real world. First and foremost, a profit-maximizing firm has a strong incentive to avoid paying such compensation. Even if a “good corporate citizen” wanted to pay compensation, it would be taking a risk — its competitors would be able to charge a lower price and potentially outcompete it in the quest for market share and profits.

Second, think about the complexity of tracing a negative externality back to its source. In the case of the river and fish, many economic entities have played a role in causing the pollution. Which ones should offer compensation? Which people should receive compensation?

Third, compensation may do very little to solve the problem. Even if the power company offered me monetary compensation, I’d still be upset that I can’t take my daughter fishing. I’m one of those people (the 99% in my estimation) who would rather have a modest income coupled with full opportunities for health and happiness, instead of a huge income coupled with degraded environmental and social conditions.

In today’s cultural setting, my parents never would have smoked in the car on our trip to Nags Head. The external costs of their habit (i.e., increased odds of health problems for their children) have become much more present in the public consciousness. The dangers of secondhand smoke are now well known, and smoking, especially around children, has become frowned upon. Cultural change, therefore, can play a role in curbing negative externalities, but it is often slow to arrive and incomplete. For example, when society got fed up with the worst cases of water pollution (e.g., rivers catching on fire), the culture of environmentalism generated the political will to pass new water quality laws. Over the years, the cultural change and laws have prompted big improvements to water quality, but we still have plenty of waterways that are unsafe for swimming and fishing.

So the question is “What can we do besides wait for the culture to evolve?” For starters, let’s stop viewing externalization of costs as a small flaw that can be fixed with a few taxes or minor governmental interventions. It’s a huge flaw that’s built into the system. And that means we need to change the system.

In the boardroom, instead of working to minimize private costs, business leaders need to be working to minimize social costs. It doesn’t strengthen the economy or society when a company inflicts long-term environmental or social harm to maximize short-term profits. The game needs to be revised, therefore, to free businesses from this constraint of profit maximization. A vast accounting infrastructure exists to measure profits — there are rules, highly paid accountants, and entire corporate departments dedicated to counting up revenues and costs. But there is no such infrastructure for counting up a firm’s social and environmental impacts. We need to rethink the basic model of commerce to prevent and clean up the negative externalities that flow from today’s model.  This rethinking process is more important now than ever before — negative externalities are piling up and becoming increasingly threatening (e.g., global warming) as nations and corporations continue their pursuit of unending economic growth on our finite planet.

I hope we can speed up the cultural shift and change the economic framework. I really want to go fishing with my daughter.