In his Guardian column, criticizing growth as “The Insatiable God,” George Monbiot writes:

Is it not also time for a government commission on post-growth economics? Drawing on the work of thinkers like Herman Daly, Tim Jackson, Peter Victor, Kate Raworth, Rob Dietz and Dan O’Neill, it would investigate the possibility of moving towards a steady state economy: one that seeks distribution rather than blind expansion; that does not demand infinite growth on a finite planet…

It is no surprise that we at CASSE strongly agree with Monbiot. Nor does it come as a surprise that a columnist for Forbes, Tim Worstall, would disagree. What is surprising is that Worstall uses me in support of his position (with which I disagree) and against Monbiot (with whom I agree). How does he manage such a reversal? By conflating growth (quantitative physical increase) with development (qualitative improvement), and claiming that 80% of GDP increase is due to qualitative “growth” (total factor productivity), and is therefore independent of increase in physical resource use–when in reality the “total” factor productivity increase in question is mainly caused by an increase in physical resource throughput. This requires further explanation.

In a previous article, also criticizing Monbiot, Worstall states his position more completely, as quoted below, [my brackets inserted].

Value add [added] is economic growth, not more stuff. And we can take this insight to an extreme as well, that extreme being the steady state economy proposed by Herman Daly. In this world resources are only abstracted from the environment if this can be done sustainably. And we recycle everything of course [not energy or highly dispersed materials]. So, in such a world can we still have economic growth? We have no more access to more stuff to make stuff out of: so is growth still possible? Yes, of course it is. For we can still discover new methods of adding value to those resources that we do have available to us through our recycling. Daly calls this qualitative growth rather than the quantitative growth that we cannot have. [Actually I speak of “qualitative improvement” to emphasize that technology is not a cardinally measurable quantity that can properly be said to grow]. But there’s absolutely no difference at all between this and the more conventional economic descriptions of growth. Qualitative growth is akin to growth through an increase in total factor productivity as opposed to growth via the use of more inputs [only remember that “more inputs” should include natural resources, but does not]. And Bob Solow once pointed out that 80% of the growth in the market economies in the 20th century came from tfp (total factor productivity) growth, not the consumption of more resources. We’re just using different words to describe exactly the same thing here [not really].

Now if this were true we could keep resource throughput constant, avoiding most of the increasing environmental costs of growth, and still have 80% of historical GDP growth. Once matter-energy throughput is stabilized at an ecologically sustainable level we could presumably have significant GDP growth forever with minimal environmental costs, thanks to increasing total factor productivity. I would be happy if that were true, but I am pretty sure that it is not. Nevertheless, if Forbes believes it, maybe they would then endorse a policy of limiting resource throughput (cap-auction-trade or carbon tax), and be content with still significant GDP growth based only on total factor productivity increase? Don’t hold your breath. Worstall explicitly discounts any notion of resource scarcity, so why limit throughput? But, just for good measure, he argues here that even with resource scarcity, technology can, by itself, provide most of our accustomed growth, as it supposedly has in the past.

Worstall’s source for the 80% figure is the “Solow Residual,” which is commonly misinterpreted as a measure of total factor productivity. As calculated, it is a measure of “two-factor” productivity, the two factors being labor and capital. The Cobb-Douglas production function that underlies this calculation omits natural resources, the classical third factor. This means that it cannot possibly be an accurate analytical representation of production. It is like a recipe that includes the cook and the oven, but omits the list of ingredients. 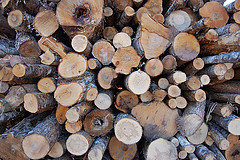 As natural resources becomes increasingly scarce, can we afford to ignore their contributions to increases in production? Photo Credit: Claire.Ly

Value added has to be added to something, namely natural resources, by something, namely labor and capital. The cook and the oven add value to the ingredients, but nothing happens without the ingredients. Our empty-world economic accounting attributes all value to labor and capital, and treats natural resources in situ as superabundant free gifts of nature. But in today’s full world, resources are not only scarce but have become the limiting factor. Leaving the limiting factor out of the analysis makes the Cobb-Douglas production function not only incomplete, but also actively misleading.

A large residual indicates weak explanatory power of the theory being tested–in this case the Cobb-Douglas theory that production increase is due only to capital and labor increase. But instead of being embarrassed by a large unexplained residual, some economists were eager to “explain” it as an indirect measure of technological progress, as a measure of improvement in total factor productivity. But is technology the only causative factor reflected in the residual? No, there are surely others, most especially the omitted yet rapidly increasing flow of natural resources, of energy and concentrated minerals. The contribution of energy and materials from nature to production is also part of the residual, likely dwarfing technological improvement. Yet the entire residual is attributed to technology, to total factor productivity, or more accurately “two-factor” productivity, in the absence of natural resources, the classical third factor.

In conclusion, I think the Guardian and Monbiot’s position is not in the least weakened by the criticism from Forbes and Worstall, but that reliance on the Cobb-Douglas production function should certainly be weakened.

Herman Daly is an emeritus professor at the University of Maryland School of Public Affairs and a member of the CASSE executive board. He is co-founder and associate editor of the journal Ecological Economics, and he was a senior economist with the World Bank from 1988 to 1994. His interests in economic development, population, resources, and environment have resulted in more than 100 articles in professional journals and anthologies, as well as numerous books.

Ecosystem Services: The Traveling Salesman and the Trophic Conundrum
12 replies

Peace, Love, and the Gift
Scroll to top
$