The story of a hippy flower-child who leveraged big economic decisions that ushered in renewable energy and sensible land-use for Austin and the State of Texas.

I encounter many young adults who are discouraged by America’s failure to respond to big issues affecting the future of Planet Earth and human civilization. They do not see much opportunity to make major changes, especially at the governmental level. But empowering examples can illustrate how significant changes can be made in governance at many levels. Cities can and have provided some model changes, but we will never get to a sustainable, steady state, true-cost economy when major energy and land-use decisions continue to take us in the opposite direction.

Cities like Seattle, San Francisco, Portland (Oregon), and Chicago have led the way with enlightened environmental and economic policies. In Washington, DC, I served on Mayor Gray’s “green ribbon” panel to help fashion a comprehensive green plan for the nation’s capital.

This post focuses, however, on a lesser known city, Austin, Texas, that made big economic decisions that changed the dynamics in energy, transportation, land-use, and self-reliance.

The post is about what a hippy flower-child was able to do in Austin by getting elected to the city council. Max Nofziger left his family’s farm in northwest Ohio over 40 years ago and went to live in Austin. He was a hippy and initially made his living selling flowers on street corners, but managed to get elected to the city council and his persistence and rationality helped lead the way for some significant changes.

Working at first with the leaders and organizations in Austin who were advocating wind and solar power, Max began an improbable run in the 1980s for city council on an anti-nuclear, pro-solar platform with a “Run-for-the-Sun” campaign theme. Even though he lost four races–two for city council and two for mayor–he kept educating the public and used common sense logic when he spoke.

His popularity with the voters grew and he got 20% of the vote in his second run for Mayor. Recognizing Max’s growing support, the newly elected mayor appointed him to the advisory board for the local utility. Max helped in some basic clean energy efforts, such as defeating a lignite coal power plant proposal, getting solar panels placed over the 3-M Company’s parking lot, and helping close the antiquated and dirty gas plant in one of Austin’s poorer neighborhoods.

The key long-term action was to get Austin to build the first wind farm in Texas in 1994-5. The success of this city-owned facility helped convince the State legislature in the late 1990s to pass a five-year plan to incentivize wind power in Texas. Governor George Bush signed this legislation, which proved so successful that it was renewed for a second five-year period while Bush was President of the United States. Today, Texas is the number one state in wind power, with 12,755 megawatts installed and 7,000 currently under construction.

Max was influential in two big land-use decisions–the Austin International Airport and the Convention Center. He helped avert land-use idiocy and save hundreds of millions of tax dollars.

In the 1980s, there was widespread support for a new city airport to replace the half-century-old small airfield that abutted increasingly crowded neighborhoods. Voters approved a new site, but it was one that wealthy developer interests had purchased in anticipation of making big money.

Then a momentous global surprise occurred as the Berlin Wall came down. One immediate repercussion was that the Air Force decided its Bergstrom base in Austin was no longer needed. Max realized that Austin owned the land the Bergstrom airport was on and the city could now reclaim it. With the Air Force’s decision to close the base, the city could have use of the fully functional airfield with its 10,000-foot runway. This choice would save the city at least $500 million in land and runway construction costs.

The problem was that all the politicians had received contributions from the developer interests and were not about to change; however, Max was able to obtain a referendum on the siting choice and it won easily. 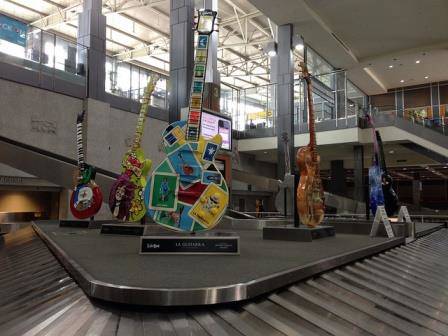 Not content with a victory on the siting decision, Max led an effort to make sure the new airport terminal reflected Austin culture, featured local food, and provided facilities for local artists to perform. Despite initial opposition by agribusiness food lobbyists, the plan went ahead and continues to be a success. There have been over 7,000 music performances to date.

This example illustrates a significant reuse of perfectly good resources, as well as prevention of a waste of taxpayer money on developer enrichment schemes. Incorporating good architecture for the terminal and boosting the city economy with local food and performances by local musicians points to the importance of looking comprehensively at all the changes that are possible with major land-use decisions.

The second important land-use decision was on the siting of the Austin Convention Center. As a city council member, Max knew the developer lobby had “pre-selected” the place they wanted for the Center, and had greased the pockets of decision makers to ensure that it was selected, even though it was a poor site from the standpoint of requiring a lot of driving and creating congestion. Max proposed a sensible location that would help avoid traffic jams and unnecessary driving, and would be near the evening entertainment zone. Top architects were hired to design the facility and solar collectors were put on the roof, which had the additional advantage being visible to interstate auto traffic and educating the public on the efficacy of solar.

The energy and land-use decisions that Austin made enabled progress to occur toward a prosperous, sustainable economy. Had they gone in a different direction, there would be less hope for achieving a sustainable, steady state, true-cost economy.

The Steady Stater Stance on Renewable Energy: A Clarification
1 reply

The Guardian and Monbiot versus Forbes and Worstall
Scroll to top
$