Regulations have played an essential role in modern attempts to curtail pollution, prevent abuses in the banking system, ensure safe food, and protect public health. They have been indispensable in checking powerful corporate interests that abuse the public trust.

Now, just on the heels of the global financial collapse and forty years after the first Earth Day, we are witnessing two frustrating failures in the United States:

(1) the failure of regulatory bodies to perform their duties, and

A prime example is the inability and the unwillingness of the government to implement the law and halt the obliteration of portions of the Appalachian Mountains by mountaintop-removal mining. Despite creative strategies by many citizen groups involving all branches of government — legislative, executive, and judicial — the erasure of the landscape continues. The destruction of these biologically diverse mountains in West Virginia and the wreckage of public drinking water, however, are not just environmental nightmares. They are also economic calamities that are completely incongruent with the principles of a steady state economy.  A corporation with a health, safety, and environmental record like Massey Energy would not even be able to maintain a license to do business in a steady state economy. 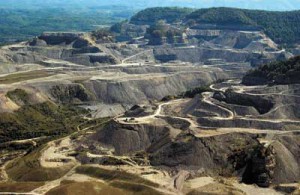 Better regulation could prevent problems like this nightmare on Kayford Mountain.

Regulations, including tax code changes and outright bans on particularly destructive practices, will be part of the landscape in a steady state economy, but we have to structure them differently. We need to change the dynamics that cripple much regulation today. Here are some key elements of the regulatory transition aimed at curtailing the abuses of corporations and preventing pollution:

(1) Make it vastly more expensive to pollute than to prevent pollution: no more token fines, legal delays, and slaps on the wrist.

(2) Increase taxes on pollution — it’s a no-brainer to tax what we want to reduce or eliminate.

(3) Apply special regulatory attention to the natural resource extracting industries (i.e., fossil fuel, timber, and mining). These industries are causing immense pollution and wiping out entire ecosystems. Extra disincentives should accompany any regulations on pipelines, drilling, reactors and other risky ventures where the consequence of an accident — natural or man-made — produces very damaging health or environmental impacts.

(4) Economize the use of raw natural resources in production processes and establish comprehensive recycling programs. In his seminal book, Cradle to Cradle, architect William McDonough has described such a strategy for reducing the enormous throughput of raw materials to a sustainable level.

Here are two examples to illustrate the above points:

(1) The U.S. strategy for phasing out the use of ozone-depleting chemicals under the Ozone Treaty of 1987 (Montreal Protocol) was a smashing success. It is a strategy worth implementing for other pollutants. The Congress set phase-out dates for a group of ozone-depleting chemicals and imposed a steeply increasing tax on their usage until the date of the ban arrived. In response, corporations stopped using the chemicals ahead of schedule, quite a different scenario from the usual foot-dragging.

(2) Yet another oil spill just occurred, this time on Montana’s magnificent Yellowstone River when an Exxon pipeline ruptured and spilled an estimated 42,000 gallons. In the past year the world has witnessed a major nuclear catastrophe in Japan at the reactors in Fukushima, run by Tokyo Electric (TEPCO), as well as a gigantic oil spill in the Gulf of Mexico when BP’s deep drilling went awry. In these and other similar cases the current global system privatizes the gains and socializes the losses (i.e., the corporations keep the profits, and citizens get stuck with the bill for the environmental disasters). Nobel-prize-winning economist Joseph Stiglitz observes that societies following this policy “inevitably mismanage risk.” With each passing day, it becomes clearer that we need to manage risk, not continue to mismanage it. Thus, regulatory controls on extractive industries must reflect the riskiness and magnitude of adverse outcomes.

In contrast to this discussion on improving regulatory approaches, the present Republican leadership has given a green light to eviscerating regulations across the board, much as former House Speaker Newt Gingrich attempted in the mid 1990s. This is part of a long-term, deliberate effort to frame regulation as being the problem, not the solution.

I suggest that we directly confront this ideology and switch the frame to view new regulatory approaches as problem-solvers that will achieve beneficial results for human civilization and the ecosystems we inhabit.

Two “Robin Hood” Taxes for the Price of One

Opportunities for a Different Economy in 2011