A good story often includes a touch of magic — just ask Harry Potter or Twilight fans. See if you can spot the magic in the following passage by Charles Wheelan from his book Naked Economics, in which he considers the question, “Who feeds Paris?”:

Somehow the right amount of fresh tuna makes its way from a fishing fleet in the South Pacific to a restaurant on the Rue de Rivoli. A neighborhood fruit vendor has exactly what his customers want every morning — from coffee to fresh papayas — even though those products may come from ten or fifteen different countries. In short, a complex economy involves billions of transactions every day, the vast majority of which happen without any direct government involvement.

Let’s ignore for now that Wheelan’s “right amount” of fresh tuna corresponds to a disappearing fishery (the closure of vast fishing areas in the South Pacific is a story for another time). Wheelan’s argument and the main message of today’s globalized economy is that Twinkies spontaneously sprout on supermarket shelves. Hamburgers originate from the silver stovetops of McDonalds restaurants. Water itself flows from shiny taps, translucent bottles, and fancy vending machines. We don’t need to concern ourselves with trifling matters such as where this stuff comes from or how it arrives. Because of the magic of the market, we only need to know how to get our hands on sufficient cash, credit, or public funds to buy it. In a nutshell, the argument says that all the cheap food, cheap products, and cheap thrills of modern times spring directly from global trade and economic growth. 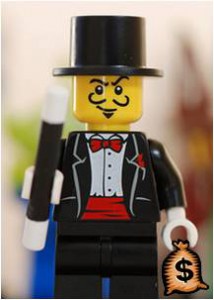 Is this the guy responsible for perpetual economic growth?

To a neutral observer, it certainly can look like magic — like Adam Smith dressed as Merlin, summoning all this visible wealth with his invisible hand. That’s essentially what Wheelan and other economic analysts are saying. Through the magic of free markets, we can produce and consume an ever-increasing amount of stuff (and as a side note, we’ll be rich enough to clean up any associated environmental messes, or at least export them to less enlightened nations).

That’s some trick, but it’s not real magic — it’s just an illusion. If we take a step back and observe what’s happening, we can expose the illusion and see that the market is hiding something up its sleeve: cheap energy. That’s the crowning achievement of a new book called Energy: Overdevelopment and the Delusion of Endless Growth — it pulls back the curtain on the market’s magic act. With photographs that manage to frighten and inspire at the same time, and with essays that provoke both deep thought and deep concern, Energy clarifies how the economy is able to achieve miracles such as the shipment of papayas to Paris, and it assesses the prospects for keeping the magic going.

Every economic transaction is underwritten by a continuous supply of abundant and cheap energy. This supply “supports the entire scaffolding of civilization.” (p. 8) The complex web of trades and transactions and mass consumption have been made possible by the exploitation of energy-dense fossil fuels. And continued growth of such an economic system requires increasing supplies of energy.

Energy presents facts about the fossil-fueled economy that are well known in several circles but ignored in most:

These facts help illuminate the predicament of modern society. We’ve built a set of institutions and a way of life that require continuous economic growth. But such growth is entirely dependent on access to cheap energy. And using more and more cheap energy is digging us into a deeper and deeper hole of spoiled landscapes, unstable climate, and biodiversity loss. But politicians, pundits, and the public have swept this predicament away with the insane assumption that economic growth can go on forever because of things like technological ingenuity, market efficiency, and labor productivity (all of which are dependent on access to cheap energy).

It can be a real downer to contemplate the way humanity has used so many energy resources (resources that were given to us by nature) to dig this hole. But the authors of Energy refuse to wallow at the bottom of the hole. Instead, they construct a ladder with rungs made out of ideas for change — ideas like educating the public to develop widespread energy literacy, conserving both energy resources and natural landscapes, and establishing resilient communities. These rungs offer a hopeful transition to better ways and better days. The hopeful conclusion is that we can figure out how to live the good life in a powered-down economy — an economy that accepts enough as its organizing principle rather than more.

In her lyrical and contemplative afterword, Lisi Krall writes, “Perhaps the real question of progress is not how to forge a new energy frontier, but how to forge a different model of economic organization and purpose, a model that isn’t predicated on never-ending growth and a belief that there are no real biophysical limits.” She believes that it’s time to give the magicians the hook. Luckily Krall and her colleagues in ecological economics, along with the authors of Energy, have been working on an economic model that is based on scientific observation and humility rather than magical thinking and arrogance.

The Populations Problem
Scroll to top
$