Today’s global economy is causing shortages of natural resources (both renewable and nonrenewable) as we come to the end of what might be called the Age of Extraction. A true cost, steady state economy, on the other hand, would prevent resource problems by maintaining population and resource consumption well within the carrying capacity of the planet.

Energy and mineral shortages, along with depletion of forests and fisheries, are driving the extractors and harvesters to evermore remote places. No longer able to find gushing oilfields, vast stands of virgin timber, or waterways teeming with fish, the extraction companies are racing to the farthest reaches of the planet in search of profits.

The end of the Age of Extraction does not mean that such resources will disappear. In his recent book, The Quest, Daniel Yergin describes oil and gas discoveries that he predicts will turn the Western Hemisphere — from Canada to Brazil — into the next Saudi Arabia. But today’s extraction is pursuing fuels that are either dirty or hard to get. We see more pollution, both from accidents and mundane chronic causes, increasingly pushing civilization beyond the carrying capacity of the earth, wiping out more and more species, and accelerating climate destabilization.

Today’s global economic operating system tolerates and even abets severe pollution damages as industries externalize the costs from their books. Scarcity has made some of the most environmentally devastating energy and mining projects “short-term cost effective.” For example, according to price and revenue figures, it’s cost effective to extract oil from tar sands in Alberta, a process that requires huge energy inputs, grotesquely contaminates land and water, and poisons people, fish, and wildlife.

A surge of fracking to reach natural gas deposits more than a mile underground has attracted drillers in a manner reminiscent of the California Gold Rush days. Fracking, along with very deep offshore oil drilling, illustrates the contamination that is occurring from energy extraction in numerous locations. Shell oil company is preparing to drill in the Arctic Ocean where little if any emergency relief will be available to contain a spill. 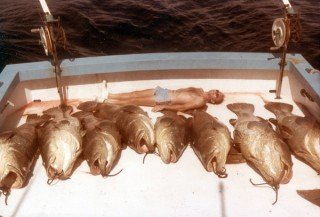 Overfishing during the Age of Extraction (photo taken in 1983) has pushed the goliath grouper to the edge of extinction.

Along the world’s coastlines overfishing has depleted stocks. Some near inshore “fisheries” have actually become fishless. Recent analyses of the history of fishing off the California coast, as seen through interviews with three generations of fishermen, produced startling findings. The youngest group (age 15-30) had no idea that it was once common to fish right off the coast. They didn’t view the coastal zone as being overfished because, they said, there were no fish in this zone (see p. 140 of Climate Wars by Harald Welzer).

The oldest group (age 55 and above) could recall eleven species that had disappeared from today’s far offshore fishing ground, whereas the group between age 31 and 54 could recall seven, and the youngest group only two. Sixty years ago the oldest group could recall catching 25 goliath groupers per day, but by the 1960s the number had plunged to eleven, and then to only one a day in the 1990s. Tragically, only ten percent of the youngest group believed that stocks of the grouper had disappeared because they didn’t think they were ever there to begin with.

Today this experience is being repeated on a massive scale as ocean trawlers are “vacuum cleaning” the oceans as they seek scarce schools of fish. A strong potential exists to push fish and other renewable resources beyond the point of recovery.

The world economy has been unable to reverse the depletion trend. Without a true cost, sustainable economy, nations are faced with three choices. They can:

High-tech operatives try to assuage public concern with the claim that geoengineering on a gargantuan scale can enable the oceans to absorb more carbon and produce more cloud cover to prevent planetary overheating. For those nations that can’t get a robust program going on such easy technologies as wind and solar energy, the claim for geoengineering as a savior from climate disruption seems a tad on the ambitious side.

After the transition to a true cost, sustainable economy, the extractive projects I have described would be a curious relic. The global economy would be seen as a subset of Spaceship Earth. Survival on board the spaceship depends on using sufficient supplies (not ever increasing supplies) of resources, as well as consumption rates that are commensurate with regeneration rates.

Too many world leaders are focused on restoring an economy that has been undermining the life-support systems of Spaceship Earth. A different kind of economy — a true cost economy — is needed to take us forward at the end of the Age of Extraction.

Preempting a Misleading Argument: Why Environmental Problems Will Stop Tracking with GDP
2 replies

Approaching a Steady State Economy, Part 1 — Getting Around
Scroll to top
$