Each fall at one of America’s oldest universities, a substantial portion of the freshman class enrolls in Economics 101 and then proceeds to participate in a bizarre ritual. The night before the first midterm exam, when students should be tucked away in the dusty corners of the library reviewing their supply and demand curves, or perhaps even lying in bed dreaming about their first exam, something quite curious happens.

Late in the evening, a few more students than usual can be seen lingering in the quad. As more and more anxious college kids make their way onto the grassy field and the balcony that overlooks it, electricity begins to build along with the crowd, and a nervous energy pulses through it as the hour approaches midnight. All the windows in the dorm rooms above the quad open as residents look over the gathering horde. An unsettling quiet befalls the students as they take a collective inward breath. A backwards countdown, just like New Year’s Eve in Times Square, organically originates from somewhere in the crowd. At precisely midnight, the Econ Scream erupts. Normally mild-mannered students hang out of windows screaming, “I HATE ECON!” Members of the crowd, some of them shirtless, scurry in all directions, spewing unintelligible grunts from the depths of their souls. The Econ Scream is a great welling up of emotion and a massive release of stress-laden energy. And just as quickly as it begins, it ends with an eerie silence. 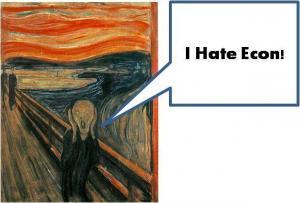 What causes students to build up and then blow off steam over a simple test of economic knowledge? Aside from the novel pressures associated with freshman exam-taking, students often have trouble with the study of economics because of its lack of connection to what they see in the real world. This lack of connection certainly marked my own experience studying economics. I screamed as loud as any participant in the Econ Scream.

Despite my concerns, I decided to major in economics, although I took a second major in environmental science to counterbalance the more fanciful parts of the economics training (how in the world do we measure utility, anyway?). I came to appreciate the analytical methods of economics. Economists are adept at drawing simple line graphs to represent complex ideas and analyze behaviors exhibited by individuals and societies. I also liked the clean logic of some of the underlying principles, such as the law of diminishing returns. But something about my economics training left me with an uneasy sense of uncertainty.

That uncertainty stayed with me, even as I worked as an economic policy analyst. In fact the uncertainty grew so large that I abandoned the field to concentrate on environmental science and conservation biology. Years later, while participating in a conference, I met Herman Daly, heard him speak, and got a copy of the textbook on ecological economics that he wrote with Josh Farley. Since that day, my world has changed. I call it the Herman Daly epiphany, a surprisingly common occurrence for people who encounter Daly’s work after struggling with some of the more far-fetched fantasies of economics (especially when it comes to perpetual economic growth on a finite planet).

Daly’s explanations of how the economy works and the necessary transition from growth to sustainability tend to resonate with people who have studied natural sciences, as well as people who mindfully observe the world around them. He provides analyses and descriptions that are drawn from fundamental scientific principles, and he connects dots in an inspiring way. He certainly inspired me to get back into economics. His insights helped me understand that we can build a better economic framework. I came full circle from giving up on the madness of economics to embracing steady state economics as a calling. 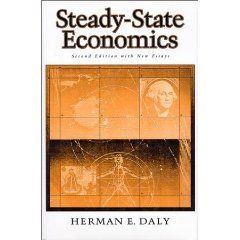 My favorite book by Herman Daly, not surprisingly, is Steady-State Economics. I picked up a used copy somewhere along the line, and I’ve highlighted it and scribble comments in the margins. But there is something unusual about my copy – it’s printed backwards. The introduction is at the back of the book, and the conclusion is at the front. You literally have to read it right to left. When I first got it, I thought about returning it, but then I realized it was perfect – perhaps the book that turns mainstream economics on its head ought to run in a different direction.

I felt a tinge of sadness when I learned that Herman Daly was retiring from his post at the University of Maryland, but the sadness quickly evaporated. For starters, we are fortunate that he is posting witty and wise essays right here on The Daly News. But more importantly, I realized that he has finished planting the seeds of economic transition. It is now our job to tend the garden and produce the fruits of a sustainable and fair economy.

The New Herman Daly Bio: Confusion at a Critical Juncture and Other Missteps