‘Tis the season for untold numbers of undergraduate students around the world to receive their first exposure to “Principles of Economics.” During the first couple of lectures, economic terms and concepts are thrown at impressionable young minds at a dizzying pace: opportunity costs, rational choice, marginal change, market economies, and the mother of them all, scarcity.

The conventional economic meaning of “scarcity” appears on the first page of virtually every first-year economics textbook. Here’s the version from the textbook I use: “Although we have boundless wants, our resources are limited.” The perceived battle between unlimited wants and limited means forces us to make tough choices about how to manage scarce resources. Conventional economists assure us that their “science” provides the proper instructions for making these tough choices. Thus, the “scarcity principle,” besides having intuitive appeal, provides the justification for the very existence of neoclassical economics.

The scarcity principle, however, is just an assumption, and it appears to be a dangerous one. Maybe in the empty world of the 18th century classical economists, it was mostly harmless to assume that people have unlimited wants because the vast majority of people had so little. But now that we live in a full world where the global economy is bumping against ecosystem limits, it’s time for economists to stop assuming that everyone always wants more and start accepting that it’s possible to have too much.

Still, questioning the relevance of scarcity in driving human behavior is a no-no in a conventional economics class. The student doing the questioning is likely to be shut down by the accursed phrase, “That’s not economics.”

The first reason why it’s tough to argue the point with conventional economists is that they only concern themselves with the scarcity of resources relative to other resources in a market, neglecting the reality of absolute scarcity. Philip Lawn shows the difference between relative and absolute scarcity clearly by asking, on the one hand, what happens to the price of a non-renewable resource like oil as the stock is depleted? Most people see that stock depletion leads to an increase in absolute scarcity and predict that the price would increase. On the other hand, he asks, what will happen to oil prices if OPEC significantly increases extraction rates and floods the market? Here, most people would predict that the price of oil would decrease as the increased flow of oil makes it less scarce relative to substitutes like coal. Of course, these scenarios are two sides of the same coin. In an empty world, the flow effects of relative scarcity on prices have dominated the stock effects of absolute scarcity, but this cannot continue indefinitely on a finite planet. In his book, Steady-State Economics, Herman Daly writes:

If there is no choice to substitute one scarce resource for another, then there is no relative scarcity, and conventional economists will often concede the point, holding that such a situation lies outside the domain of economic analysis. Without choices it’s easy, they say — you just do what you gotta do. It’s not big-E economics. Case closed. 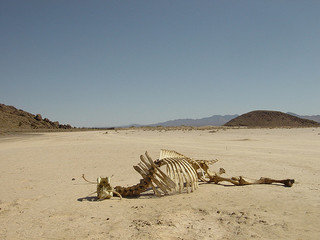 A second reason it’s hard to argue with conventional economists about scarcity is because they disregard two features of human behavior. The first feature is that people prioritize some wants above others. Economists often ignore the fact that some goods and services are fundamentally more important and sought earlier than others. No, they cry, this would introduce unacceptable value judgements to our “positive” theory! As John K. Galbraith wryly noted, “Nothing in economics so quickly marks an individual as incompetently trained as a disposition to remark on the legitimacy of the desire for more food and the frivolity of the desire for a more expensive automobile.” The second behavioral feature is susceptibility to advertising and other marketing techniques. Despite the omnipresent sheen of the $500 billion global advertising industry sparkling on modern society, mainstream economists maintain that consumers know exactly what they want because, well, they just do. It’s not big-E economics if people don’t know what they want. Case closed. Again.

Economists often make strange assumptions about the scarcity of resources, but maybe their assumption about wants is stranger. Do people actually have unlimited wants, and has anyone bothered to test this hypothesis? Toward an answer, I recently came across a couple of studies that provide compelling evidence demonstrating people don’t have unlimited wants ingrained in their DNA.

The first is a fascinating book edited by John Gowdy titled Limited Wants, Unlimited Means about the economics of nomadic hunter-gatherer societies. As the title makes abundantly clear, the authors argue that our society of mass consumption has much to learn from members of these highly mobile societies who do not want to carry material possessions beyond those which they can make and replace from resources readily available.

The second study is an experiment whereby researchers team up with a Chinese fast-food restaurant in the United States to test a number of strategies for reducing calorie consumption among unsuspecting customers. They find that a much better strategy than calorie labeling is to simply ask people if they would like to “down-size” their meals during the ordering process. In particular, the researchers found that more than 30% of customers accepted the opportunity to receive less food, regardless of whether or not they received a discount! Although this result does not reject the unlimited wants hypothesis outright, the question of why calorie labelling is less effective than a verbal offer cannot be explained under neoclassical assumptions.

An alternative explanation is that people have difficulties controlling themselves. The best part of the fast-food study is that a substantial portion of customers readily recognized that they wouldn’t be able to stop consuming food once it had been placed on their plates, so they opted for less when given a nudge at a strategic point in their consumption decision. Clearly, finding these strategic points to encourage “right-sized” consumption is an urgent challenge on a full planet. Hopefully researchers can help us find more of them.

Andrew Fanning grew up on the blustery east coast of Canada where he eventually earned a master’s degree in economics. His interests include lots of things, especially the capacity of the planet to support life.

What Is the Limiting Factor?
4 replies

Top 10 Policies for a Steady State Economy
Scroll to top
$