The finance ministers of the world convened in Washington for the annual meeting of the World Bank. Their goal: high risk/high reward mega-infrastructure projects (big dams, power plants, pipelines, grids, etc.). The two big questions: aren’t there better approaches to infrastructure today? And won’t the ministers’ plans put a sustainable economy further out of reach? The happy answer to the first question is “yes,” but “yes” is also the sad answer to the second question.

That is why International Rivers, Amazon Watch, and many other groups gathered outside the World Bank on October 12th to protest the plan for high risk/high reward projects and promote “Power 4 People.” In a true-cost economy the objective for infrastructure would be low risk/high reward projects. Such an economy would avoid casino-style investments and embrace infrastructure that leapfrogs the costly, destructive, and outdated approaches favored by the World Bank.

Despite serious mining and health issues, construction of cell phone infrastructure has been more environmentally sound than the old standard of installing high-cost telephone lines in remote areas. Today over 400 million people have cell phones but lack access to electricity. Taking a cue from the cell phone revolution, there’s an opportunity to construct a low risk/high reward energy infrastructure consisting of dispersed solar and wind projects. These renewable technologies can reduce the need for long and expensive transmission lines, and they don’t require water to generate electricity. Furthermore, with the cost of rooftop panels having rapidly dropped, solar energy has clear cost advantages for supplying electricity to rural communities.

In Africa about 600 million people lack access to electricity, and most are unlikely to be served by the dams and coal power plants proposed by the world powers because the transmission lines from central power stations would cost too much. That’s why the International Energy Agency reports that 70% of the world’s un-electrified areas are best served through mini-grids or off-grid solutions.

The advantages of a dispersed energy infrastructure include ability to reach the poor, reduced cost, less risk, and fewer socially and environmentally harmful impacts. Bangladesh, where something like 35,000 rooftop solar systems are being installed each month, is demonstrating these advantages.

The release of Bruce Rich’s book, Foreclosing the Future, comes at a critical moment, for it provides an insightful, well-written history of the World Bank’s inability Bank to learn from its past failures. Rich exposes the shocking first year of Jim Yong Kim’s term as Bank President, even though Kim came to the job with knowledge of the harmful impacts of past Bank projects. 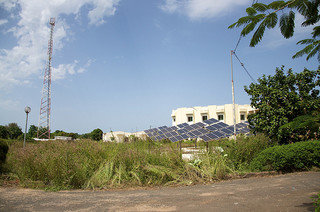 In September of 2012 Kim extolled the work of the Bank’s International Finance Corporation (IFC) in South Africa where only three weeks earlier, the worst massacre since the apartheid era occurred as 34 workers on strike were shot to death at the IFC-supported Marikana platinum mine.  On his Africa trip Kim lauded the Bank’s $3 billion loan to South Africa for the dirty Medupi coal project, the fourth largest new coal plant in the world with annual greenhouse gas emissions greater than 100 of the world’s countries.

Kim also promoted the gigantic Inga III dam in the Democratic Republic of the Congo (DRC), even though the Inga I and II dams have been operating for decades with poor results for the citizens of the DRC. 85% of the electricity from these two previous World Bank projects has flowed to the mining industry. At the same time, less than 10% of the population has access to electricity.

The good news is that promising, low risk solutions are available to construct a sustainable energy infrastructure, achieve humanitarian goals, and move the world toward a true-cost economy. But the clear message is to forget about the G-20, the World Bank, the Chinese, the U.S. export-import banks, and the finance ministers to support these solutions.

Power politics drives the decisions of these power players. Big construction companies scheme with governmental ministries to develop larger and larger projects where lots of money can be skimmed. Under such corrupting conditions, the risk that mega projects could have disastrous consequences for life-support systems on earth doesn’t seem to matter to the people in charge.

The ecological concerns of proposed infrastructure projects are substantial. Sediments from the Congo River have created a 300,000 square-kilometer fan on the floor of the Atlantic Ocean. The high sediment load and oxygen content produce huge amounts of phytoplankton — phytoplankton that sequesters carbon and is a key factor in enabling the Atlantic Ocean to act as a carbon sink. The Inga III dam would damage the sediment fan. Do we want finance ministers ignorantly proposing plans to interrupt the crucial climate-regulating dynamics of the lower Congo River with a mega-dam project?

Hopefully the finance ministers heard our answer of “no” on October 12th, but now is not the time for self-satisfied silence. In fact, it’s a good time to continue protesting the insane ideas emanating from the World Bank and promoting alternatives from organizations that value people and places above profits.

The Daly-Correa Tax: Background and Explanation

The Errant Economics of Detrimental Dams and Ruined Rivers
1 reply

A Question of Scarcity
Scroll to top
$