On and on the ironies go;
where they stop, nobody knows.
Biggest one last week for sho:
The Fed a-meetin’ in Jackson Hole!

That’s right. The entity as responsible as any other in the world for eroding our green space, all the way from grampa’s farm to the Grand Tetons, had the gall to meet again last week (as they do every August) at the Jackson Lake Lodge. From the third floor of the lodge, the Fed overlooks the Tetons while shifting the global bulldozer into overdrive, mining the mountaintops, overfishing the oceans, and releasing carbon by the gigaton.

Lest this become a baseless rant, let us base the rant in facts and logic. The Fed pulls out all the stops to “stimulate the economy.” Meanwhile growing the economy — increasing production and consumption of goods and services in the aggregate — trashes the planet. Furthermore, the economy of our grandkids depends upon a healthy and stable planet. Therefore, at this point in history with endangered species proliferating, growing dead zones in the ocean, and climate change melting whatever glaciers are left in the Tetons, the Fed is doing far more harm than good by “stimulating the economy.” Not only are they hastening the demise of the planet, they’re pulling out the economic rug from the grandkids.

The only baseless part of the rant would be to blame the members of the Fed for their insufficient education and background in ecology, or the “economy of nature.” The Fed can’t help it that their minds were inculcated at places like the University of Chicago, Columbia, and MIT. These bastions of neoclassical economics were all subject to the corruption of economics that took place early in the 20th century as well-endowed economics departments were geared to push back the populist followers of Henry George (who was to the land baron what Marx was to the capitalist).

Not to get carried away, because these academic institutions produced brilliant thoughts, for sure. But in the economics departments, students like Ben Bernanke were told again and again and again that “production is a function of capital and labor.” If you’ve ever taken a course in economics, you know the equation: Q = F(K,L). Quantity produced (Q) is a function (F) of capital (K) and labor (L). It’s called the “production function.”

Well of course production is strongly influenced by capital and labor, but what about the other crucial factor, the land! The classical economists of the 19th century all talked wisely about land, labor, and capital. Somewhere in the transition to “neoclassical” economics, land was dropped from the production function, reflecting the efforts to avoid the federal tax on land rents made so wildly popular by Henry George and the populist movement.

So now the chickens are roosting right over our heads, and it’s not eggs they’re dropping. The pollution is piling up in lockstep with GDP, while the land and resources required for more production are drying up, literally. Water and oil are the two supply curves moving inward most ominously in this age of macroeconomic Supply Shock, but you can add to the list timber, soil, fisheries, minerals, and just about any other natural resource you can think of. That’s why it’s macroeconomic Supply Shock, not a measly little, flash-in-the-pan, fracking “supply shock.” 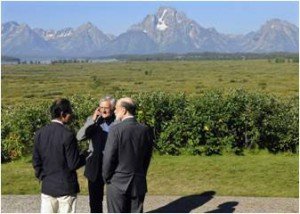 The Fed’s appalling lack of ecological expertise allows them to believe in academically deranged concepts like “green growth.” What we really need at this point in history is macroeconomic policymakers that are, first and foremost, economists of nature. These people must thoroughly understand the price we pay for growing GDP — especially the environmental price — if they are to formulate policies with positive and durable effects.

Most rants, even well-based rants, aren’t worth their spittle unless followed up with helpful suggestions. It’s not enough to point out the necessity of a steady state economy, either. That’s the goal that must ultimately be adopted, at least to avoid (more) resource wars, but politically viable suggestions for the here-and-now are needed as well.

So in the context of Fed deliberations, in particular identifying the next Fed chair, we should ask: Who is a valid candidate that, with regard to the economy of nature, is not dumb, dumber, or Summers?

Buckle your seat belts and hold onto your hats, because we’re headed for a sharp curve. Believe it or not, I recommend the recruitment of one Hank Paulson for Fed chair. Yes, that Hank Paulson, formally known as Henry Merritt Paulson, Jr., past CEO of Goldman Sachs and Secretary of the Treasury under President George W. Bush. CBO (Chief Bailer Outer) of the biggest of banks.

Remember the criteria, though, including a realistic chance of appointment. Ideally we’d have someone like Herman Daly as Fed chair. But Daly is firmly retired and, as the icon of steady statesmanship, is yet beyond the political pale. Paulson is neither of these things, yet there is some hope that Paulson is starting to get it about the conflict between economic growth and environmental protection, economic sustainability, national security, and international stability.

Paulson grew up on a farm in Illinois; he’s got to know where the milk comes from. Before college, he wanted to be a forest ranger. Alas, he wound up getting indoctrinated in business administration at the same place Ben Bernanke was immersed in the landless production function (namely, Harvard).

But there’s a big difference between Paulson and Bernanke. Paulson is a self-avowed, die-hard conservationist. He drives a Prius, is an avid bird watcher, and was even chairman of The Nature Conservancy. Surely, looking out at the Tetons, across that idyllic Jackson Hole, Paulson would be questioning the merits of further growth in the age of Supply Shock. Surely he would bring these concerns to the rest of the Fed at their annual meeting and throughout their deliberations.

Of course, based on his earlier behavior under Bush, bailing out the banks that were “too big to fail,” it appears that the landless production function had beaten the common sense out of Paulson. But then it is also possible — this we can hope is the case — that Paulson did sense the trade-off between economic growth and environmental protection all along, but felt it was too soon politically to move toward a steady state economy.

Now, more than seven years after being appointed Treasury Secretary — after BP, Fukushima, and numerous other big failures in the economy of nature including several more of the hottest years on record — presumably Paulson has reconsidered what’s really too big to fail. President Obama should ask him. If the answer is yes, Paulson should be requested to serve his country one more time, this time by slowing that bulldozer down and protecting the economy of nature for the grandkids.

The End of the Age of Extraction
Scroll to top
$