Mark this down as minor good news: in Vermont, a neoclassical economist who has long served as a media “go-to guy” for commentary on economic matters appears to have recanted a key element of the neoclassical model. He didn’t put it in those terms, and the scope of his readership is rarely larger than his (and my) home state, but still, this counts as progress.

The element of the neoclassical model that has come under critical scrutiny in the Vermont press lately is the notion that GDP — a measure of the dollar value of all goods and services produced by the economy — is a practical and useful measure of economic well-being. It’s not hard to see why GDP is being re-thought: last month tropical storm Irene dumped tropical-rainforest quantities of water on the state in just a few hours, leading to major damage from unprecedented flooding. Rivers filled their flood plains and kept rising, sweeping away roads, bridges, and houses, ruining homes, lives, farms, and communities. The publicly owned infrastructure is being put back with great speed and efficiency (and should be in good shape for the upcoming foliage season, so if you’ve planned a visit don’t think that you need to cancel). That repair work is the source of some economic confusion. The construction industry had been slumping; now workers are busy, doing productive things, getting paid. Is all this public works effort a net benefit to the economy, or not? 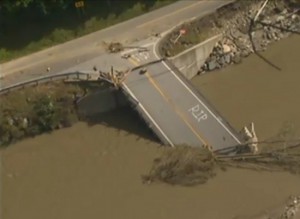 GDP smiles on this scene.

GDP gets it wrong because it fails to take into account the ongoing benefit we derive from the services of physical wealth that’s already in place — public and private infrastructure that is paid for and in use. My car is a capital investment that provides me with transportation services; if I own it, the only aspect of its delivery of services that shows up in GDP comes from the spending I do on operating costs and maintenance. And perversely, if gas prices go up so does GDP — telling us that because there’s more spending, the economy must be delivering more economic benefit. If I make the switch to renting a car rather than owning it, the rental fee shows up as a monetary transaction and gets counted in GDP — though there’s no net increase in the quantity of services I’m getting. Those services count in GDP only if I pay for them incrementally and continually (and don’t get an equity stake in my vehicle).

The same miscounting happens with the services provided by (non-rental) housing, roads, bridges, etc.: the ongoing benefit is simply not counted. GDP is an indicator for amnesiacs. It has no memory, no room to allow that the economy has been operating for quite a while and has produced forms of durable wealth — things like buildings and bridges and roads and communications systems — that continue to be useful long after they’ve been paid for.

So, when disaster leads to major new spending, a by-the-book accounting has to say: GDP is up, so we must be better off. The downside — the loss of wealth (and the loss of services derived from that wealth) can’t show up in the books because it wasn’t counted in the first place. Disaster looks to be good for business, good for the economy, good for us; within the limits of neoclassical concepts, tools, and analysis, when we repair storm damage the result is “net positive.”

Will Vermont end up net positive in economic benefits as it repairs the damage from Irene? There are additional complexities when we ask such a question about a particular location or region, and the answer is “it depends.” The net economic effect of damage and repair for any one location depends in part on where the funding comes from — whether it is raised within or outside the economy being considered. (At the macro level, there is no “outside,” and the answer is no.) If Vermont’s repairs are paid for with money from outside the state — from the Federal government, say, through FEMA grants — disaster repair might or might not have a net positive effect in the state; it may or may not exceed the loss of wealth from the disaster. If there is a net positive effect, the surplus comes either from deficit spending by the central government, or through direct transfer of resources (through Federal taxes) from other states. If it’s a transfer, it represents loss of purchasing power and economic activity in the areas from which the money is transferred: there’s been no net gain in the system, just a shift in who benefits and who pays. If the funding comes from deficit spending, the stimulus may be just what’s needed to put people back to work, but there is still a shift: the transfer is inter-generational rather than geographic. Wealth creation that might have occurred later, benefiting a future generation, has been brought forward to benefit us.

This wouldn’t be a problem in an economic system on an infinite planet. In a world without resource constraints, deficit-financed investment can always increase the amount of production in the future, and the deficit can be repaid from that increase. Thus, on an infinite planet it would be possible for both the present and the future to benefit from our deficit spending today. But on our planet, with an economy built beyond the limits of what’s sustainable, expanding production today diminishes the wealth and well-being of people in the future. On a finite planet at maximum capacity, there’s no room to expand the economy’s ecological footprint without causing harms and losses, and economic growth today is a transfer of wealth and well-being from the future to the present.

Casting up GDP accounts, even when corrected this way, doesn’t begin to measure the personal and social costs of the damage — people’s loss of livelihoods and secure expectations, their loss of the personal effects that help define them and their familial and community relations, and sometimes — as when farmland is poisoned by toxins in floodwaters and herds and breeding stock are swept to their deaths — their loss of a known, satisfying way of life in a familiar landscape. When those softer, less quantifiable costs are included, it’s very hard to think that the catastrophe in Vermont had any sort of net positive benefit.

But economics as neoclassicists practice it slices off those less quantifiable aspects of well-being and looks at cold, hard cash. In those strictly monetary terms, disaster looks good for business, and more business looks good for Americans. That’s the flaw in GDP that one neoclassical economist has recanted in his latest appearance in our local media.

I interviewed this particular economist by phone in 2009, when I was putting together an op-ed piece on the shortcomings of GDP for the New York Times. When I asked the professor about the perverse way GDP tallied the results of Hurricane Katrina ($82 billion in property damage, so an $82 billion boost to GDP if all the damage were to be repaired), he defended GDP. “That figure is going to include a lot of improvements,” he said. “Those people are getting new cars, new carpets, new refrigerators.” Notice that this way of thinking gives a disciplinary seal of approval (“100% rational behavior”) to a very uneconomic, irrational exchange: you’d be crazy to pay the cost of complete destruction of your household in order to get incremental upgrades of some of the things it contains.

While it isn’t always possible to map theoretical insight directly from individual households to the larger household of planet earth, here I think we can. Because GDP doesn’t count the flow of services from existing household wealth as an economic benefit, GDP fails to treat destruction of that wealth as a cost item, and so it treats reconstruction of that household wealth as a net gain. Ditto when we look at the whole system: in the planetary household GDP fails to count ecosystem services as a benefit, and so fails to count ecosystem destruction as a cost item, and so makes continual economic growth look like a net gain. Because of our shoddy accounting, we’re destroying the ecosystems that support civilization, often to get nothing more than an incremental upgrade to the wealth we already have. At some point, we’ve got to admit that this is uneconomic, irrational: crazy.

This far the go-to economist didn’t go, at least not as he was quoted in the paper. But fixing our accounting system is a commonsense idea that subverts infinite planet thinking, and in what he did say the neoclassical economist showed that he had taken the first step on that path. He allowed that Tropical Storm Irene wasn’t an economic boon to Vermont, because “there’s a tremendous amount of wealth that’s destroyed, and that’s not a good thing.” Having recognized the existence of that already-built wealth, he should be ready to take the next (logical!) step: start measuring that wealth and start counting the services we derive from it as part of our economic benefit. That means getting beyond GDP, which focuses on the now, the moment, the instantaneous rate of change in our market-based economic activity.

Getting off of GDP and implementing an accounting system with a memory will prove to be the first step on a path to broader changes. If we take into account the services we derive from our considerable stock of built wealth, and also take into account the services we derive from our considerable-but-declining stock of natural wealth, we’re led by inexorable logic to re-evaluate the concept of economic growth. When we have a system of economic accounting that includes all costs and all benefits, it will be easier to see that much economic growth is uneconomic, because it costs more in degradation of ecosystem services and other costs than it brings in benefits. Once we get over GDP it will be easier to see that the only sane, sustainable economic doctrine is one that calls on us to live within our current solar income, a steady-state flow of matter and energy through the economy. By then this truth will have become self-evident: on a finite planet, we can’t grow the economy’s ecological footprint forever.

If, thanks to unprecedented storm damage, neoclassical economists are led to reject the valuations offered by GDP and follow their thinking to this conclusion, then unprecedented weather events like Irene may yet prove to have a net positive economic effect: they will have nudged economic theory onto the path to a sane, rational, sustainable, steady-state economy.

Call Me a FOCer: Big Ideas under a Big Sky
Scroll to top
$