When activists, teachers, and thought-leaders talk about the steady state economy (SSE), we often refer to macroeconomic state-oriented policy. Not always fodder for dinner conversation. If we’re going to mainstream the SSE, efforts have to be reflected in the local community to show what a steady state economy feels like in the real world. To that end, I believe that a strategic partnership between the transition movement and steady state advocates would be mutually beneficial. Transition initiatives are in need of a lexicon that articulates what we’re transitioning to—that is, the degrowth transition to a steady state economy—and the steady state movement would be able to foster greater collaboration with proponents of community economic development and grassroots change. In collaboration with a number of local teachers and practitioners, I tested a strategic partnership over the last two years, with positive early results in a city that isn’t generally known for leading the charge to be green.

Sometimes, steady state advocates simply fall into the trap of preaching to the wrong audience. We want to celebrate the adoption of SSE policy by governments—things like the reduction of the work week, a basic income, and an increase in the fractional reserve requirement. So rather than having conversations with our neighbours, we jet-set to cosmopolitan centres only to argue with neoclassical macroeconomists over the feasibility of embracing a new set of norms. The response is almost inevitably “one day…but not now.” Among audiences where competitive overconsumption and entitlement are accepted as prime motivators, the steady state economy could not possibly be an easy sell. The culture shift is happening elsewhere.

In fact, the culture shift is likely occurring among a sizeable number of citizens in your own community, where steady state policies are an easy sell indeed. Perhaps post-growth thinkers need to embrace a both/and strategy—both policy reform and grassroots change—rather than privileging one over the other or wasting energy on the wrong audience.

Enter the transition movement, a neighbourhood-based movement for low-carbon, climate-resilient action and reform. 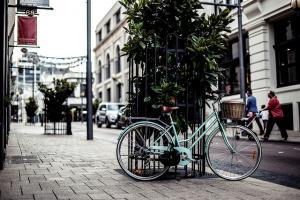 When bicycling isn’t enough, and policy reform is too slow, perhaps what we need is a community-based movement. Photo Credit: Daniel Lee

The transition movement has adopted the notion that “If we try and do it on our own it will be too little, if we wait for government to do it it will be too late, but if we can gather together those around us—our street, our neighborhood, our community—it might just be enough, and it might just be in time.” This likely resonates just as well with proponents of degrowth towards a steady state economy: clearly, if we wait for government, it will be too late. If we act as individuals by embracing materially simpler lifestyles, we may just be branded “weird” by friends and family. Too little. But if we foster a community of like-minded partners, our efforts may be just enough, just in time. Community gardens appear, a can-do entrepreneurial culture leaps ahead of nervous or fickle legislators, bottom-up pressure is exerted on bureaucrats, and simpler low-carbon lifestyles become almost cool—perhaps even hip(ster). More than anything else, the transition becomes something that people can feel. It’s achievable, and it’s fun.

Can it happen in your community? I think Transition Winnipeg’s early experience demonstrates that it can happen just about anywhere. Over the past two years, I inflicted my enthusiasm for post-growth economic change upon the organization’s initiating committee. What I found was that grassroots activists and practitioners were craving a word that described an economy that functions within ecological limits. Often the only word we use to describe the present state of affairs is “capitalism,” but popular alternatives (“socialism”) aren’t universally designed to function within ecological limits. Attractively, perhaps, the word “steady state” can be used to describe both.

Transition Winnipeg’s first pass at imagining Winnipeg as a thriving post-growth community and steady state economy is entitled Winnipeg’s Great Transition: Ideas and Actions for a Climate-Resilient, Low-Carbon City. The document is not all that unique among transition initiatives. In fact, there are plenty of vision documents among transition towns, often called “energy descent action plans,” that outline how energy and climate constraints will shape communities in the years to come. What is perhaps unique about Winnipeg’s Great Transition is its explicit use of the post-growth paradigm and steady state economy as organizing principles. After all, energy use and economic growth have historically been extremely closely linked; it is accepted among ecological economists that you can’t have much of one without the other. On many transition websites, including that of the REconomy Project, “growth” was widely used at first. While the term seems to have been phased out, “steady state” has not been embraced as an alternative. Would it not be meaningful for transition groups to state the explicit goal of aggregate degrowth towards a steady state economy?

The release of Winnipeg’s Great Transition was something of a one-day sensation in the local media for a city where ecological resilience and post-growth planning almost never makes the headlines. We timed the release to coincide with the middle of the civic election and invited a number of mayoral candidates to attend. Three candidates joined us for a sincere dialogue and were receptive to the strategy. The authors of the report were invited by some of the candidates to provide a workshop to the new city council to explain why post-growth planning is important, and how it improves resilience. The report may even have made conversation around the dinner table.

Are small, local initiatives like ours going to move us toward a steady state economy overnight? No. Are they going to create the kind of on-the-ground connections and enthusiasm that a full-scale political and economic movement requires? With time, I believe they will.

Winnipeg provides a great site to test a strategic partnership between the transition movement and CASSE, but that’s not because the city is a shining beacon of change! One mayoral candidate recently announced that he would cancel rapid transit and focus on filling potholes instead (full-cost accounting be damned). Rather, Winnipeg provides a great example of change precisely because the city sometimes fails to embrace the leading edge. If a grassroots partnership can work here, it can work just about anywhere.