Climate destabilization eclipses all other security threats to human civilization except for a major nuclear war. But the current global economy gives no signals to investors and consumers about the profound implications of climate destabilization on water cycles, agriculture, and humanity’s ability to grow food for seven billion people.

The latest weather disaster, the monster Hurricane Sandy, demonstrated that changing environmental conditions pose a huge threat to U.S. security and stability. In the aftermath of the storm, thousands of people in New York and New Jersey face grim conditions, with $50 billion in damages, over 20,000 homeless, and some dying of hypothermia.

The American public, however, has been conditioned to think of national security in terms of terrorist threats. The Washington Post’s veteran Pentagon reporter Greg Jaffe makes the case that the world has never been safer, if security is to be measured by acts of human sabotage and terrorism. Jaffe asserts that according to “most relevant statistics, the United States — and the world — have never been safer… global terrorism has barely touched most Americans in the decade since Sept. 11, 2001.”

Jaffe appropriately criticizes presidential candidates and other politicians for exaggerating the national security threat from terrorism because they want to “cast themselves as potential saviors in an increasingly dangerous world.” During this time, he notes, more U.S. citizens have been crushed to death by furniture and televisions falling on them than have been killed in terrorist attacks (Washington Post 11/4/12).

Despite the way politicians are talking about national security, the reality is that over the past twenty years, national security has become more closely tied to environmental factors such as energy, water, food, and climate disruption. President Clinton’s State Department made the formal acknowledgment that deteriorating environmental conditions can cause conflicts and constitute threats to stability. 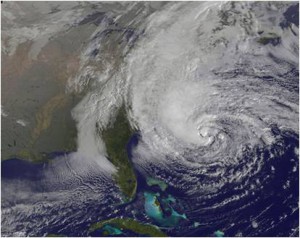 Rampaging global weather disasters pose serious challenges to governments around the world. According to Swiss Re, the world’s largest reinsurance company, twenty to forty percent of losses from disasters are uninsured. The company says economic losses from climate-related disasters are substantial and rising. One news release states, “Over the last 40 years global insured losses from climate-related disasters have jumped from an annual USD 5 billion to approximately USD 60 billion.” Another news release says that “without further investments in adaptation, climate risks could cost nations up to 19% of their GDP by 2030, with developing countries the most vulnerable.”

To address the root causes we must move from our current global system of cheater economics and casino economics to a true-cost economy. In a true-cost sustainable economy, the climate-disrupting effects of coal and oil would be factored into their prices, and prices would rise beyond most people’s idea of affordability. Ironically, the current method for calculating national economic well-being (GDP), counts the billions spent on fixing storm damages as a plus.

In the presidential debates Romney and Obama competed to see who could be more supportive of oil and gas and who would accelerate the movement of tar sands oil from Canada the fastest. It was as if they were saying, “Let’s see who can generate the most greenhouse gases the fastest and create even more gigantic storms and weather disruptions.”

The extraction of tar sands oil is devastating the homes of native people in Canada and creating a wasteland scene reminiscent of Dante’s Inferno. Utilization of such a filthy fuel on the scale now being advocated means “game over for the climate,” according to NASA climate scientist James Hansen.

At least the victorious President Obama stressed that he wanted more renewable energy, whereas Romney opposed wind power, belittled concerns about climate destabilization, and joked about rising sea levels. Now is the time to demand that Obama fulfills the clean-energy promise he made in his first term. Along the way, we might even alleviate some threats to national security that are already on our shores.

Growth of GDP and Discontent in Egypt and Tunisia

Who Will Get This Economy Going? No One