Economics is about counting costs, and the cost to be counted is “opportunity cost,” arguably the most basic concept in economics. It is defined as the next best alternative to the one chosen, in other words, as the best of the sacrificed alternatives. You chose the best alternative, the opportunity cost is the second best, the alternative that you would choose if the best were unavailable. If there were no scarcity, choice would not be necessary, there would be no opportunity cost, and economics would not exist. More of everything means opportunity cost is zero, and is essentially the denial of economics. Yet “more of everything” is the goal of so-called “growth economics.” When the whole economy grows, the growth economists say that we get more of everything. Is there an opportunity cost to the growth of the whole macroeconomy? Not in the view of mainstream macroeconomists. In their view the economy is the Whole and nature (mines wells, grasslands, fisheries, forests…) are Parts of the economy. Used up parts can be substituted by new parts; natural parts can be substituted by manmade parts; natural resources can be substituted by capital. The whole macroeconomy is not itself seen as a subsystem or part of a larger but finite ecosystem, into which the macroeconomy grows and encroaches. These economists imagine that the macroeconomy grows into the void, not into the constraining biophysical envelope of the ecosystem. Since macroeconomic growth is held to incur no opportunity cost (the displaced void is worthless!), one must conclude that “growth economics” is really not economics— it is almost the negation of economics! 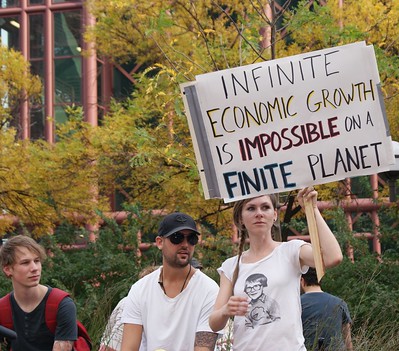 However, increasing takeover of the ecosystem is the necessary consequence of the physical growth of the macroeconomy. This displacement is really a transformation of ecosystem into economy in physical terms. Trees are physically transformed into tables and chairs; soil, rain, and sunlight are physically transformed into crops and food and then into people; petroleum is physically transformed into motive force, plastics, and carbon dioxide. Thanks to the law of conservation of matter-energy, the more matter-energy appropriated by the economy, the less remains to build the structures and power the services of the ecosystem that sustains the economy. Thanks to the entropy law, the more dissipative structures (human bodies and artifacts) in the economy, the greater the rates of depletion and pollution of the remaining ecosystem required to maintain the growing populations of these structures against the eroding force of entropy. These are basic facts about how the world works. They could plausibly be ignored by economists only as long as the macroeconomy was tiny relative to the ecosystem, and the encroachment of the former into the latter did not constitute a noticeable opportunity cost. But now we live in a full world, no longer in an empty world—that is, in a finite ecosystem filled up largely by the economy. Remaining ecosystem services and natural capital are now scarce and their further reduction constitutes a significant opportunity cost of growth. 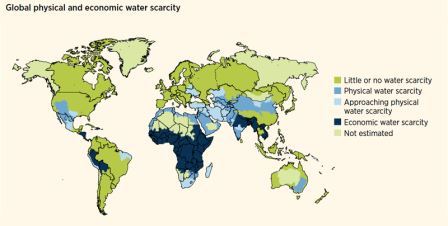 The new economic question is: Are the extra benefits of physically transforming more of the ecosystem into the economy worth the extra opportunity cost of the ecosystem services lost in the transformation? Has the macroeconomy reached, or surpassed, its optimal physical scale relative to its containing and sustaining ecosystem? Is the economy now too big for the ecosystem from the point of view of maximum human welfare? Or from the point of view of all living species and the functioning of the biosphere as we know it? If these questions about the opportunity costs of growth sound too abstract, think of the following concrete examples: wholesale extinction of species, climate change, peak oil, water scarcity, topsoil loss, deforestation, risks from more powerful technologies, a huge military to maintain access to world resources, and an increase in the risk of wars over resources, etc.

As the marginal costs of growth have increased, what has happened to the marginal benefits? Studies in the USA and other countries show that, beyond a threshold of sufficiency, growth in real GDP does not increase happiness. In sum, growth has become uneconomic at the margin, making us poorer, not richer. Uneconomic growth leads to less available wealth to share with the poor, not more. And such growth in the USA in recent years has been accompanied by increasing inequality in the distribution of income and wealth—that is, the marginal benefits of growth have gone overwhelmingly to the rich (third cars and second homes) while the marginal costs (polluted neighborhoods, unemployment and foreclosures) have gone mainly to the poor.

Surely economists have thought about such simple and basic questions as, “Can the economy be too big in its physical dimensions relative to the ecosystem?” And, Are the marginal costs of growth now larger than the marginal benefits? Surely economists have good answers to these obvious questions! Well, dear reader, I invite you to ask these questions to your favorite economics professor or pundit. If you get reasonable answers, please share them with me. If you get a lot of obfuscation, consider telling the economist to go to hell. Be open to learn—but also be prepared to show some disrespect when it is deserved!

The Full Seas Act and the College of the 21st Century