Whether or not you like President Obama or his policy preferences, you have to acknowledge his consistency. Even those with “zero regard” for the president confess, “At least Obama is consistent.”

But not consistently. There is one issue, at least, on which he hasn’t held still, moving in and out like an octopus in a sunken ship. That issue is the relationship between economic growth and environmental protection. Based on his state of the union address, his current tack is a mixture of avoidance and vague allusion.

Yet Obama’s inconsistency on this issue is nothing to be hypercritical of. In fact, given this recent turn, we might even say, “At least Obama is inconsistent.” As odd as that may sound, it’s better to be inconsistent when you were, at one time, dangerously wrong.

Obama’s rhetoric on the issue has basically been through three phases, which can be categorized and paraphrased as:

The progression from Obamanomics to the win-win rhetoric, while cynical, was predictable, but what happened next? What caused the President to retreat from win-win, nearly all the way back to a position of environmental irrelevance? After all, win-win has held a central spot on the Politician Bingo card for as long as baby boomers and younger can remember. Furthermore, the shining example of win-win since the late 1980s has been the marriage of economic growth to environmental protection. The wedding of these opposites allowed presidential candidates, from left to right, to appeal to pro-growth and pro-environment interests simultaneously. It didn’t matter that it was a scientifically fallacious shotgun wedding. It worked at the political altar. 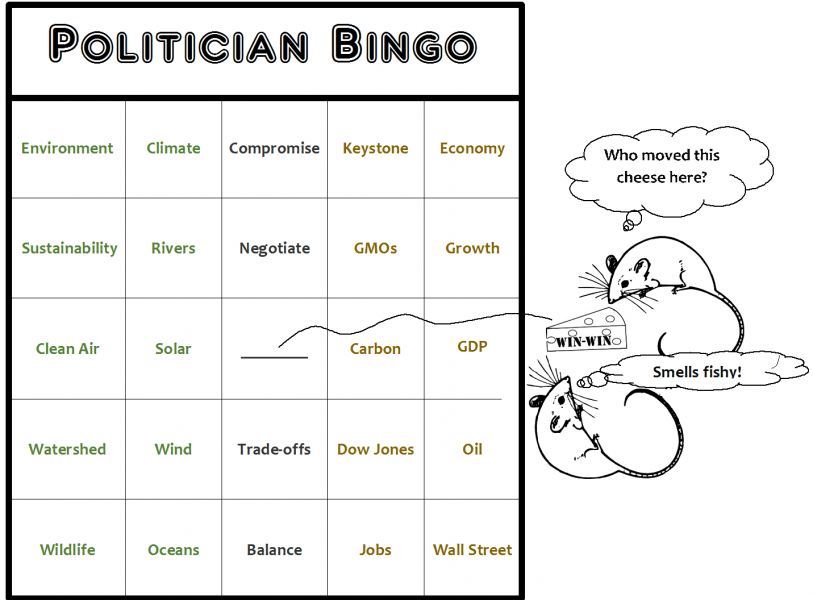 So what happened? Did Obama move his own win-win cheese, or did some speechwriter move it for him? It’s not like we have a trail – say a money trail – that’s easy to follow. With a lot of issues it’s easy to backtrack a politician from his or her mouth all the way back to Big Money. It might be big gun money generating rhetoric like “a good guy with a gun in every school,” or big tobacco money puppeteering, “I believe tobacco is not addictive.” No matter how wrong, such well-endowed rhetoric sticks around long after everybody understands how fallacious it is. Eventually, though, it either goes away or becomes an icon of ridicule.

Yet Obama’s dropping of the win-win rhetoric is different, because there is no money to be had from doing so. Big Money, even its better side in the grant-awarding foundations, will have nothing to do with talk about stabilizing the size of the economy or even slowing the rate of growth. In fact, Little Money doesn’t want much to do with it either. This explains the plethora of organizations promoting various notions of a “new” economy or a “green” economy without coming clean on the fundamental conflict between economic growth and environmental protection. They’re all chasing the money to keep their boats afloat.

Will the ironies ever cease?

Yet there are two things – both extremely powerful – that clarify the fundamental conflict between economic growth and environmental protection, loud and clear. One is science; the other is common sense.

The science is sound and sufficient, but it’s not like the libraries are overflowing with it because, again, there’s little money available for such research. Therefore this type of research–ecological macroeconomics we might call it–tends to be swamped out by Big-Monied, “neoclassical” economics with its fallacious theories of perpetual growth. But ecological macroeconomics is there for the reading: theoretical and empirical detail about the trade-off between economic growth and biodiversity conservation, a stable climate, and ecological integrity in general. And we know that Obama’s science advisor, John Holdren, has a background in the environmental impacts of economic growth.

So Obama’s relinquishing of the win-win rhetoric probably stems from a mixture of scientific awareness, plain old common sense, and perhaps a sense of pride. Obama recognizes that, with a short two years of presidency remaining, his legacy is ever more on the line. It would be a shame to end up like President Clinton, for example, who is haunted by the inconvenient irony of his own unmitigated and relentless win-win rhetoric that “there is no conflict between growing the economy and protecting the environment.”

Whatever the explanation may be, let’s hope Obama sticks with phase 3, or even comes full circle to phase 1, the more innocent Obamanomics with its recognition that economic growth is unsustainable and increasingly harmful in a century already slated for extinctions, climate change, water supply shocks and the like, all in proportion to our obsession with increasing production and consumption of goods and services in the aggregate, otherwise known as economic growth.

Let’s also hope he starts using the word “environment” again, prominently and eloquently. This is the 21st century: the environment should be a central feature when assessing and discussing the state of the union. Let’s even hope Obama starts re-connecting the two issues–environment and economy–but this time so publics and policy makers on both sides of the aisle get used to dealing frankly with the trade-off. Only then can we hope for policies that protect the environment, sustain the economy, re-secure the United States, and help to stabilize the international community.

Negative Externalities Are the Norm

Oil and Real Estate Bubbles in Canada: What Goes up Won’t so Smoothly...

Potential New Allies in the Effort to Achieve a Sustainable True Cost Econo...
Scroll to top
$