An important event has been hardly noticed in Australian politics. But it could be the start of a trend to recognize and address causes of social and environmental problems rather than merely to struggle with the symptoms. Until recently economic growth, as measured by gross domestic product (GDP), has been the primary indicator of governmental performance, with alternatives virtually absent from the political discourse. At last one brave member of Parliament is changing that, unafraid to lead the way toward a steady state economy.

To understand the significance of this event, we need to get some perspective on the Australian political situation. There are two rival sides that differ mainly in rhetoric and in their strategies for winning support from voters. More than 90% of elected politicians belong to these two sides.

Voting is compulsory in Australia for citizens over 18 years of age. There is a preferential voting system in which every candidate must be ranked for a vote to be counted at all. Effectively this has meant that Australians ultimately had to choose between two political parties. In voting for the House of Representatives, votes for independent candidates and minor parties have rarely made an impact. The electoral system is built around the two parties. There is a review of electoral boundaries every seven years. Boundaries of electorates are redrawn so that there is a more even competition between the two major parties. The parties distribute leaflets on how to vote for their candidate, and these suggest an order of preferences for the other candidates.

The situation is different for the Senate, in which each of the six Australian states has its own set of candidates. This setup has given the minor parties and independent senators an opportunity to wrest some power away from the two main parties. This happened during the last national election when the Australian Greens and a small number of independents were able to cast deciding votes. This meant that citizens who voted for a minor party actually had a voice at last. A tax on carbon emissions commenced on July first as a consequence.

Australia has a free press. A common approach in the media has been to strive for a “balanced” view, which has generally been achieved by presenting extreme viewpoints on any given issue to contribute a public “debate.” The effect of this is to polarize the public, rather than to seek well-reasoned, informed decisions.

Another major factor in the political landscape is the opinion poll. Although polls can help politicians be more responsive to the electorate, they can produce undesirable consequences. Politicians become concerned about managing perceptions rather than governing from the best advice of their departments. Another consequence is that both the major political parties tend to become almost indistinguishable. One gives lip service to workers’ rights and the environment, while the other to business. In practice it is impossible to tell which is better in any aspect. Both major parties express disdain for each other and struggle to find ways to differentiate themselves for voters. Often “debate” deteriorates into personal attacks.

But one issue on which both major parties agree, as is the case throughout the western world, is the imperative of economic growth. Rising GDP is the unquestioned prime measure of success.

Conservationists have been dealing with the consequences of the growth-is-good dogma. They have taken the approach of running campaigns on specific, strategic issues that tend to address the symptoms of too much economic growth. One could argue that they have been afraid of being further marginalized as a lunatic fringe with no grasp of reality. At least population growth has recently made it onto the political agenda, but there has been near silence on economic growth. 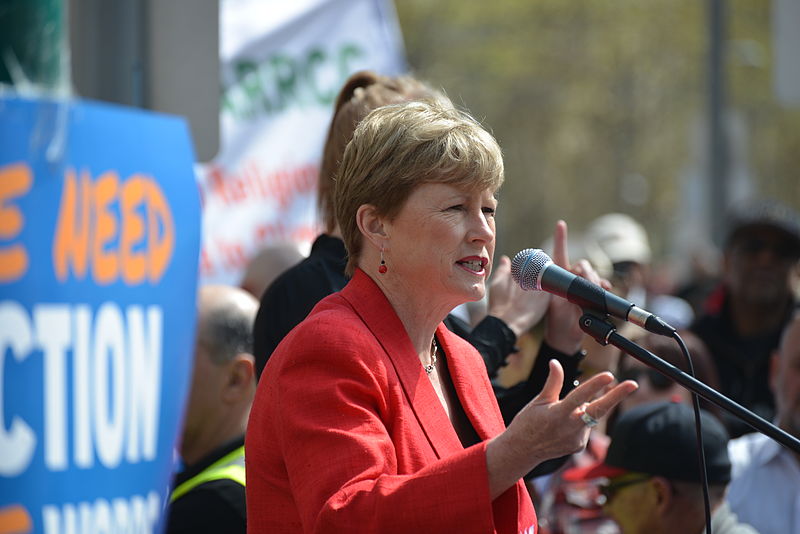 Christine Milne has been a Senator for Tasmania since the middle of 2005, and she became the leader of the Australian Green Party in April this year. There are currently nine Australian Greens in a house with 76 members.

Milne delivered a speech in late September in which she made some astute observations. She said that we can build an economic system that serves the needs of people and nature, both for today and for tomorrow. She quoted from a report of the World Economic Forum, “More with Less: Scaling Sustainable Consumption and Resource Efficiency”:

“Current trends clearly show that business as usual no longer works. Unless the present link between growth and the consumption of scarce resources is severed, our resource base, governance and policy structures are unlikely to sustain the standard of living societies have grown accustomed to or indeed aspire to. Action to decouple business and economic growth from resource intensity and environmental impact, has never been more critical to the long term success of business.”

Milne continued by suggesting that we reconsider who belongs to the lunatic fringe in our 21st-century economy:

“Surely it’s time that those who advocate economic growth derived from resource extraction and pollution as the major path be the ones labeled wacky, loopy, irresponsible, divorced from reality or connected to the CIA.”

She went on to question who actually benefits from pandering to mining companies while ordinary people are struggling to make ends meet. Her full speech is worth reading.

Where is this likely to lead? The media and politicians are completely out of their depth in considering an alternative to the perpetual growth paradigm. Such a change even seems to be beyond the scope of thinking of conservationists. Even members of the Australian Greens may have underestimated the significance of this speech. Almost everyone seems content to ignore this speech and go on as they have.

But now that a prominent politician has publicly questioned the dogma of growth, we’ve moved a little closer to a much-needed turning point in Australian politics. Thanks to Christine Milne for saying what needed to be said. How refreshing to see true leadership taking root within the barren fields of the Australian political landscape.

In Commemoration: A Sampling of Herman Daly
1 reply

The Daly-Correa Tax: Background and Explanation