The global economy has run for a century primarily on fossil fuels but is now undergoing a rapid transition to a global economy based significantly on rooftop solar, wind, and efficiency. This is a tangible movement toward a steady state economy because with wind and solar, the amount we use today does not affect tomorrow’s supply; and unlike fossil fuels, the pollution externalities are small and do not harm fellow competitors or the public.

This revolution is more than a technical fix because it is shifting the ingredients of the material products and services of the economy from toxic, polluting, non-renewable substances and ingredients to ones that are renewable and dramatically lower in pollution. It is demonstrating that renewable energy can avoid imposing dangerous impacts onto the public or onto future generations.

Skeptics over the last two decades have argued that renewable sources such as wind and solar are trivial and simply incapable of providing the power needed by the global economy—that all they will ever do is provide only a small percentage of the world’s electricity. I remember the days when utility executives belittled renewables, warning that more than about 5% of wind or solar electricity in a region would crash the grid! 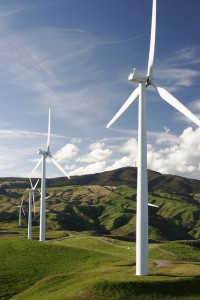 The renewable energy revolution is a stepping stone toward a sustainable true-cost economy. Photo Credit: janie.hernandez55

I want to present a few startling and uplifting facts that demonstrate the dramatic progress recently made by solar and wind power around the world. 1 These facts give the lie to the phony assertions made by utilities in their efforts to block renewable energy.

Rooftop solar is growing worldwide by 50% per year. In 1985 solar cost $12 per watt, but today’s prices are closer to 36 cents per watt. Every five hours the world adds 23 MW of solar—which was the global installed capacity in 1985.

As we look to achieve a true-cost, steady state economy, questions are constantly raised about the behavior of other powerful nations that might appear to have no interest in a sustainable economy. The renewable energy revolution provides breakthrough opportunities here. China is already putting its energy future into more and more renewable energy. It plans to more than double its current wind capacity with an expansion goal of 200,000 MW by the year 2020.

Even the French, who rely on nuclear reactors for 75% of their electricity, are planning on increasing their wind generating capacity to 25,000 MW from their present 8,300 MW.

The renewable energy revolution will enable civilization to stop the growth of highly polluting fossil fuels. It will enable society to leave the majority of the remaining reserves of fossil fuels alone and unburned. Acceleration of this revolution helps in solving many problems and is a key to restoring and maintaining the life support systems of the earth.

For a number of reasons, this renewable energy revolution is a stepping stone toward a sustainable true-cost economy. First, unlike fossil fuels, the footprint of wind and rooftop solar is minimal. Wind turbines erected on farmland use very little land and allow farming to continue. Rooftop solar can be placed on flat commercial and industrial roofs in metropolitan areas where connections to the grid are available.

In comparison, extraction of fossil fuels can create some of the worst pollution and habitat destruction ever seen. Consider the devastation being caused in the biologically diverse mountain forests of West Virginia by mountaintop removal coal mining. Or look at the obliteration of Alberta’s landscape and contamination of its lakes and rivers from tar sands mining.

This point is substantial because far too many of the products of the global economy involve externalization of enormous pollution costs.

Second, the usage of wind and solar today does not affect the amount of wind and solar available tomorrow. They are renewable. Furthermore, wind and rooftop solar are basically waterless technologies, whereas fossil fuel and nuclear power plants use enormous quantities of water for cooling. As water shortages multiply worldwide as a result of population and industrial growth, and climate disruption, this benefit will become even more significant.

Third, wind and solar are big job creators. In Germany the number of jobs in wind and solar is about 400,000 versus 200,000 in coal and conventional fuels. This amazing boost in clean energy jobs has happened in the last decade. Job creation is a major concern in any transition to a sustainable economy.2

Those who are serious about getting to a true–cost economy should help accelerate the renewable energy revolution as a way to achieve it.

An Economics Fit for Purpose in a Finite World
4 replies

Preempting a Misleading Argument: Why Environmental Problems Will Stop Tracking...