Quick Note on Another Matter: On September 3, BP officials threatened not to pay for damage claims and clean up work on its huge spill in the Gulf of Mexico if it is not granted new offshore drilling permits. If you are offended by this blatant blackmail attempt, see Dr. Blackwelder’s call for banning BP from doing further business in the United States.

Lessons from the massive flooding that has beset Pakistan, uprooting 14 million people, underscore the need for a new economic paradigm. River engineering (a mainstay of the old economic paradigm) in the Indus Basin reduced small and medium floods, but set up the conditions for millions to be harmed when larger floods occurred. 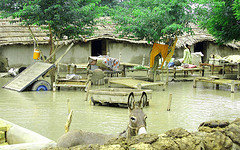 Sustainable infrastructure forms the foundation of a steady state economy, but that foundation will have to be rebuilt from the ecologically ignorant infrastructure constructed throughout the 20th century. Big river engineering projects have actually heightened flood damages and destroyed vital renewable resources such as forests and fisheries.

Pakistan has always had monsoon seasons, and for generations people have adapted to them. However, the increases in extreme weather conditions, deforestation, population, and large infrastructure projects like mega-dams have created huge vulnerability. Both the Pakistani and the Indian governments resorted to massive water releases from their flood-swollen reservoirs in order to “save” their dams.

Friends of the Earth International reports that these water releases proved fatal to scores of people around these dams. For years, communities and civil society groups opposed these mega-dams, pointing out that they were catastrophes waiting to happen. They predicted that in the event of extreme weather, as we are seeing now, communities located along so-called “protected” rivers would suffer the most severe impacts. Sadly, in the last few weeks these predictions have been realized.

The engineering of the Mississippi River carries important lessons for Pakistan and the rest of the world. Big dams on the Mississippi’s longest tributary, the Missouri River, have blocked the flow of sediment downstream. The massive dikes and levees along the banks of the Mississippi itself prevented the river from spreading out and depositing silt during flood stages. The end result is the lack of silt for the delta at the mouth of the Mississippi in Louisiana – home of the nation’s greatest wetlands, which are eroding at the rate of two football fields each hour. The loss of these outstanding wetlands means less natural flood protection for New Orleans and other susceptible areas.

To move to a healthy steady state economy, civilization must not repeat the engineering mistakes of the 20th century. In Tim Jackson’s Prosperity Without Growth report, the author stresses the need for appropriate infrastructure and maintenance of ecosystems. The problem with the “big dam and levee approach” is that it ruins productive river ecosystems that contain abundant fisheries, bottomland forests, and fertile land. To make the transition to a sustainable economy, scarce financial resources must not be spent on counterproductive infrastructure that traps governments in a worsening spiral of flood relief, damage repair efforts, and environmental degradation.

Throughout most of the 20th century, politicians and the construction lobby disregarded the annual cycles and natural dynamics of rivers and did not care about impacts of giant dams on fisheries and forests. The big dam builders created an unsustainable and highly destructive infrastructure.

A little noticed phenomenon is the dam removal movement in the U.S. Since 1970, communities and governmental agencies have taken down over 500 dams. The cruel irony is that just as the U.S. began to protect rivers and to remove dams that were doing more harm than good, the rest of the world failed to learn from our experience. 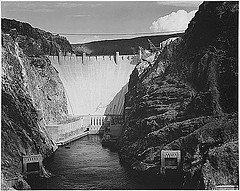 Hoover Dam on the Colorado River, where native fish have been almost totally replaced by non-natives.

Captivated by stories of the gigantic Hoover and Grand Coulee hydropower dams, many nations chose to emulate the big dam and levee approach without critically assessing what was and wasn’t working. For example, of the 64 dams built by the Tennessee Valley Authority (TVA), an ex-post analysis showed that only 4 actually produced benefits in excess of costs (see The Myth of the TVA by William U. Chandler).

Massive flooding has also occurred this summer in China despite the Three Gorges Dam, the world’s largest, and the claims that it would control the 1,000-year flood. To “control” flooding, this dam permanently flooded out hundreds of towns and cities, forcing the relocation of over one million people.

If transnational construction companies and river engineers have their way, major rivers around the world will be loaded with dams. The implications for fisheries are devastating as migratory fish passage will be destroyed. For example, on Southeast Asia’s Mekong River, over 3 million fish per hour during migration season pass the spot where a gigantic dam is planned. In Cambodia the large lake Tonle Sap increases six-fold during flood stages on the Mekong. Dams on the river will wreck these centuries-old flood patterns and destroy the fisheries that one million people who live near the lake depend on.

We will never get to a sustainable and prosperous economy if scarce economic resources are spent on wrecking great river basins that provide enormous benefits when they are maintained in a more natural condition. Big dams are the equivalent of putting giant doses of cholesterol in the arteries of planet earth and have no place in the infrastructure for a prosperous steady state economy. So it is time to cease giving foreign aid to the transnational construction industry for more “dam” foolishness.

Surely We Can Do Better than Nuclear Socialism

A New Economy Will Help Save Rivers and Fisheries