When I was a rookie economic activist in the fall of 2008, having become the director of CASSE only a year prior, I met Jerry Mander.  At the time I had no idea how many heroic things he had done to both conserve natural areas and support the transition to a better economy.

As a card-carrying introvert, I’m not much of a networker, but I came to know Jerry through one successful episode of networking. Right around the time I began my job of promoting the steady state economy as a positive alternative to the pursuit of perpetual growth, Annie Leonard released her runaway hit film The Story of Stuff. I thought it was outstanding, and I wanted to know how she had made it. So I gave her a call, and we had a friendly and educational (for me) discussion. I was going to be in the San Francisco Bay area where she was based, and I asked her if she would meet me to continue our discussion in person. She agreed and said that I also ought to meet Jerry Mander, so we set a time to get together for Indian food.

I didn’t know much about Jerry, other than he had founded the International Forum on Globalization (IFG) and was serving as its leader (I later learned that he and IFG had played an important role in organizing the Seattle protests against the policies of the World Trade Organization). Upon meeting him, I could see that he had a style all his own. Dressed like a professor in a tweed sports jacket, it was impossible not to notice his gray curls, which could fairly be described as “Einsteinian.” His charisma drew me in right away. 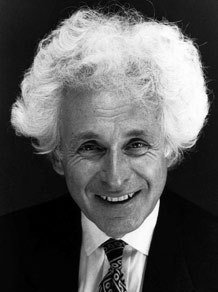 He was organizing a meeting of intellectuals and activists to discuss the downsides of capitalism and to consider alternative economic models. I was honored to receive an invitation, especially when I learned what an amazing roster of people he was convening — it was a great opportunity to learn the ins and outs of economic activism! The meeting was all the more interesting because of its timing in October 2008, when the financial meltdown was in full swing. Wall Street titans, Beltway power players, and a good chunk of the Western world seemed to be in complete panic mode.  It was the perfect moment to be questioning the economic status quo.

All sorts of scenes still occupy my memory from Jerry’s meeting. David Korten and Josh Farley proposed a new way to structure the banking industry, which would entirely change the way money works. John Fullerton explained the complexities of derivatives and the power of “big capital” in driving critical economic decisions. Richard Heinberg described the financial collapse as a sign of the end of economic growth, which became the core idea of his next book project. Annie Leonard provided details on the making of The Story of Stuff, and the view from the conference room, which overlooked San Francisco Bay, provided a fun bit of irony as she discussed her movie about the downsides of the cheap-goods economy. Behemoth cargo ships piled high with colorful shipping containers motored into and out of the bay to pick up and drop off their wares. The meeting was an incredible collection of sustainability superstars, and Jerry facilitated it with skill and grace, his flair for leadership apparent.

If Jerry’s accomplishments were limited to founding and directing IFG and running significant meetings in the process, that would be admirable enough. But on a subsequent trip to San Francisco, I had a great time uncovering one amazing fact after another about his career.

Jerry agreed to meet with me again to discuss how CASSE and IFG could collaborate. On the day of our get-together, I had some time to kill, so before traipsing through the tower-lined avenues of the financial district where we had arranged to rendezvous at a coffee shop, I walked to the public library to see what sort of facts I could dig up on Jerry.

Early in his career, he was an ad-man. But somewhere along the way, he formed an alliance with Sierra Club icon, David Brower, and he put his skills to great use. As told by Marc Reisner in his book Cadillac Desert, Brower considered Jerry to be a genius — the full-page ads he designed for the New York Times, Washington Post, and other major newspapers were largely responsible for shifting public opinion about dams in the Grand Canyon and thwarting the Bureau of Reclamation’s plans to flood some of the most picturesque lands on the North American continent.

Jerry’s role in protecting the Grand Canyon cemented his place in my Hall of Heroes. But I knew he had also written some books, so I looked in the library’s catalog and found some of them. The library had a copy of his most famous book, Four Arguments for the Elimination of Television. It was originally published when I was a first-grader, and I wish our society had taken his arguments to heart. I was part of the TV generation. In fact, I think I can honestly call myself a recovering TV addict. I’m sad to report that a sizable percentage of my brain capacity has been taken up by the cheesy dialogue and over-the-top action sequences of 80s movies and TV shows.

But it wasn’t Four Arguments that made me do a double take. It was actually Jerry’s first book that had me rummaging through the bookshelves: The Great International Paper Airplane Book. I used to check this book out from my elementary school library all the time — even more often than books on UFOs, ghosts, and the Loch Ness Monster! Not only had Jerry Mander played a pivotal role in saving the Grand Canyon, not only had he orchestrated an incredible career switch from advertiser to crusader for the public good, but he had also fired the imagination of at least one child.

When I met up with him for coffee, our conversation quickly turned from the state of the economy to something more poignant — the loss of connection to nature that has afflicted modern society. We discussed it as a root cause of many of the most profound problems of the day, and we shared stories about relationships we had built and good times we had had in our lives while exploring wild places. This loss of connection blinds people to the fact that continuous economic growth also means continuous transformation of natural resources into salad shooters, remote-controlled rotating tie racks, twelve-lane highway interchanges, and other manufactured capital and products. It was clear that a love of nature had colored Jerry’s worldview and driven many important choices in his life.

I’m planning to visit him this week, and I’m excited to catch up with my friend and have another chance to say thank you. The world is a better place for having had certain people in it. If you’re lucky, you might cross paths with such a person every once in a while. Luck was smiling on me when I crossed paths with Jerry Mander.

Normalizing Outbreaks in the Anthropocene: Growth Isn’t the Cure
3 replies

Economics as if the Laws of Thermodynamics Mattered

Why Bargains are Bad
Scroll to top
$