With great regularity and often a touch of subterfuge, a certain message crops up in the offerings of the mainstream media. Like a powerful riptide to an unsuspecting swimmer at the beach, the message tries to grab our attention and pull it out to dangerous seas. And that message is, “Consume!” Let’s examine for a moment an ironic example. 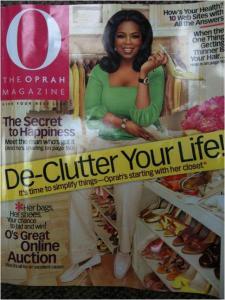 Take a look at this recent cover from O The Oprah Magazine. At first glance, it appears to espouse an ideal compatible with a steady state economy. The banner says boldly, “De-clutter your life! It’s time to simplify things – Oprah’s starting with her closet*.” I won’t make any comments here about the quantity (or quality) of stuff in Oprah’s closet, but I will point out the riptide that’s contained in the not-so-innocent asterisk at the end of the banner. The asterisk connects to text that says, “Her bags, her shoes… Your chance to bid and win! O’s Great Online Auction.” So Oprah wants to de-clutter her life, but you should clutter yours with all her excessive stuff. Perhaps bidders can get a good deal, and perhaps Oprah is donating the proceeds to a good cause, but the underlying directive is still, “Consume!”

It doesn’t take amazing insight to recognize that consumption (and usually conspicuous consumption) is promoted in magazine articles, newspaper columns, television programs, movies, and websites. After all, most producers of mainstream media are in business because of the revenues paid by advertisers. We’re all familiar with product placements – I had equated them with the common cold. Certainly a cold is a nuisance and I’d prefer not to catch one, but I can get on with life while trying to ignore it. In contrast, the brazen blurring of lines between the story and the message to consume is more like a serious bout of the flu. It pretty much ruins the whole experience, and it can’t be ignored. The flu takes over and becomes the focal point.

I’ll provide a print example and a film example to illustrate my point. My first example comes from Newsweek. I used to be a subscriber from the late 1990s until about 2005. I found Newsweek’s writing to be adequate, even if the bulk of George Will’s columns originated from an alternate reality that occupies a dark and distorted corner of his mind. But over the course of our subscription, something started bothering me more and more until I finally had enough. I wrote a letter to the editor (perhaps unsurprisingly, it was not published) and cancelled the subscription. Each week, the magazine published a “Tip Sheet” section with an alleged purpose of reviewing the latest trends. It seemed harmless enough, but over time, it concentrated more and more on consumption of superfluous products. It read like a series of sales pitches for the latest gas guzzlers, techno trinkets and gaudy gadgets. I wondered if marketers were paying Newsweek to include their latest wares in the section – regardless of the answer, it felt like that was the case. This over-the-top use of a “news” section to hock products severely interfered with my ability to enjoy the other sections.

I like to read a good article or book as much as the next person, but I really consider myself a movie person. Pound for pound, movies pack the biggest storytelling punch of all media contenders. And I’ve seen a lot of them (especially in my more youthful days). It’s embarrassing to admit, but if there were a Useless Information Corporation, I could be the manager of the 1980s and 90s Movies Department. As a result of my time in front of the movie screen, I’ve been annoyed by hundreds (or possibly hundreds of thousands, on a more subliminal level) of product placements in movies. Consider Reese’s Pieces in E.T. and FedEx in Castaway, two of the most egregious examples, and you get the idea.

Movie sequences like these do blur the lines between the story and the advertising to some extent, but they don’t necessarily take the viewer out of the movie experience and into a sales experience. Yes, E.T. eats candy, and that might influence the viewer to eat the same candy, but the scene does play a role in advancing the plot and seems plausible – how else would a young boy entice a creature to follow him home? But over time the blurring has reached insane levels.

For the nuttiest film example I’ve seen of advertising supplanting the story, I turn to the mediocre romantic drama Love Happens. If I was feeling embarrassed about all those 80s and 90s movies I saw, let’s say I’m downright mortified by the fact that I wasted time on this film.

Love Happens stars Aaron Eckhardt as Burke Ryan, a successful self-help guru who specializes in helping people deal with the loss of loved ones. Jennifer Anniston plays his quirky love interest. One of the characters in the film is a guy named Walter. On the outside, he’s big gruff guy with a doleful demeanor; on the inside, he’s more like a big teddy bear. Walter is attending one of Burke’s multi-day seminars against his better judgment. Using all his best tricks, Burke is unable to get Walter to open up about why he’s at the seminar.

Predictably, Burke has a breakthrough with Walter and gets him to share his story. It turns out that Walter’s young son has died recently in a tragic accident, and he is struggling to piece his life back together. His relationships have blinked out of existence, and he has lost his general contracting business.

How does Burke help put Walter on the path to healing? (Cue the triumphant music) He takes Walter and the rest of the seminar attendees on a shopping spree to Home Depot. For a substantial portion of this film, the viewer is treated to smiling people cruising around the hardware store picking out all the wonderful items that a general contractor needs to get back to work. Yes sir, a solid day of shopping is really all you need to get over the death of your son. That outrageous message took me completely out of the film experience. I was stunned by this shameless attempt to couple strong emotions of redemption with the purchase of a hammer and a toolbelt.

Given the difficulty of finding a movie (or some other media product) that tells a story without trying to trick the viewer into consuming something, what’s a fan of film to do? One way forward is to make a game out of it – see how often you can spot the blurring of lines, and keep a running list of the most outlandish examples. If that doesn’t suit, you can always just tune out.

For more fun with over-the-top product placement, take a look at this list and this one, too.

Where Does Inflation Hide?
2 replies