Without doubt unemployment blights people’s lives. Those who want to work need jobs. But an even more fundamental economic problem is too many people beavering away, wrecking our home planet. Politicians and economists assume population growth means more people need jobs, so the economy must grow. Better to reverse that logic, starting instead by calculating the level of output the world’s environmental resources can sustainably support. How can jobs and economic output keep growing on a damaged planet with shrinking resources?

Some economists claim that technology or human ingenuity is the ultimate resource, but such platitudes ignore the realities of technological advance. The truth is that technology both creates and destroys jobs. Labor-saving innovations often increase productivity by reducing employment. And the downsides of technology abound. Fanatics use the “ultimate resource” to build bombs. Nuclear physics gave us an energy source and medical advances, but also atomic bombs and toxic pollution. The Green Revolution that helped double or triple world grain yields relies on fertilizer made from natural gas that will eventually run out. Meanwhile, populations needing food have tripled since the inception of the Green Revolution. Growth enabled by technology puts humanity further out on a limb, increasing ecological and economic risks.

If we are so smart and technology can solve every problem, why hasn’t every problem been solved? Historians list dozens of collapsed societies. Why didn’t brainpower save past empires? Why are carbon dioxide emissions still increasing? Why, after the global financial crisis affected so many people and communities, did banks go back to speculating in derivatives? Why are a billion people stunted by malnutrition? Why are so many species going extinct? Why do war and arms races persist? And so on across a range of unsolved local and global problems. 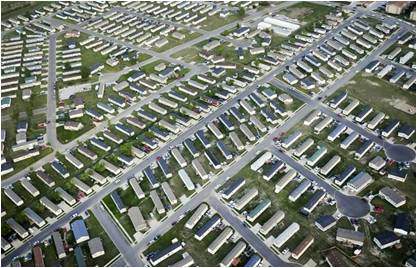 A sign of too many jobs: this eyesore (a modular worker colony) sprouted at the Bakken shale oil deposits near Williston, North Dakota. Photo by Ben Garvin, Reuters.

Perhaps the greatest irony is that even though we are counting on technology to save us, the U.S. is cutting research funding. At the same time, the cost of attending college is becoming unaffordable. In 1992 dozens of Nobel Prize-winning scientists signed a “warning to humanity” saying we should stop changing the earth so rapidly. When the world ignores scientists like Jim Hansen (NASA pioneer climate modeler), isn’t public indifference squandering the “ultimate resource?” What a contradiction: relying on science to save us and then ignoring the recommendations of our leading scientific experts.

The ecological footprint reveals that the world economy is already too big. Ecologists calculate that sustaining current levels of output would require 1.5 earths. If everyone lived like Americans, more than four planets like earth would be required. Scientists have identified nine key areas where the scale of human economies could damage earth’s ability to support us for the long run. Three of the nine “planetary limits” have already been exceeded, reducing the planet’s capacity to support human life. Current levels of economic output require drawing down planetary “savings accounts” (soils, fossil fuels, species diversity, etc.) that are rapidly being overspent and depleted.

We’re caught in a dilemma. We have too many jobs — too many people are consuming too many resources as they go about their jobs — and yet huge numbers of jobless people struggle to meet their basic needs. At the same time, policies are geared toward growing the economy with the hope of adding more jobs, while disregarding the problem of overconsumption. What can we do?

Several commonsense jobs policies could help us achieve full employment within planetary limits. In the short term we could share employment more fairly. The U.S. could achieve full employment by increasing vacation time — we get two weeks where Europeans get five weeks. We could cut back to a four-day work week, lower retirement age (say to 60), offer more part-time work or job sharing, and send more people back to school to upgrade skills. Incomes would be reduced and social security taxes would increase due to these measures, but we would enjoy more fairness in distribution of income; less crime; more leisure time; more time for family, friends and community; and improved quality of life. We might even live longer — people in half a dozen well-off European countries live two years longer than Americans.

In the long run, we must stabilize or decrease population. Society should subsidize the first child and allow a second child without penalty, but require parents who choose to have more than two children to pay the full costs of educating and providing medical care and old age support for those extra children. People who expand population take more than their fair share of everything while imposing costs on the rest of us by collectively pushing up prices for housing, land, food and energy. Crowding makes life more stressful in many ways — traffic congestion, longer lines, more competition for jobs and college admissions, higher unemployment, lower wages and higher taxes. Extra kids contribute to climate change, pollution and resource depletion. Requiring those with large families to bear the costs their extra children impose on others would incentivize responsible family planning decisions. Far from being repressive, having smaller families corrects market failure, liberates women and makes families and children better off. The world’s best educated women voluntarily choose small families as shown by the below-replacement fertility rates in some of the best educated countries.

Reversing direction to optimize the total number of jobs, rather than pursue unlimited job growth, won’t be easy. Economists must accept a major paradigm shift. Such a shift has been described in the literature for over 200 years starting with Malthus, Ricardo and John Stuart Mill. Classical economics theory included limits to growth — a “stationary state.” Sharing jobs and stabilizing population won’t solve all economic and ecological problems. Many other reforms need to be included on the agenda to achieve a steady state economy that features environmental protection and sustainable levels of consumption — reforms like a carbon tax, conservation of species diversity, and redistribution of wealth.

For such laws to be passed in democracies, the public would have to be far better informed to understand why these changes make sense. Pro-growth messages come at us incessantly from mass media, the Internet, and pro-growth lobbyists, politicians and businesses. A keystone reform will be to overhaul the way we fund our information-providing institutions. We currently use information from these institutions to make important decisions. The trouble is that much of the information is actually misinformation, because the institutions obtain their revenues from advertising that pushes the infinite-growth agenda.

Abandoning the ideology of growth so firmly embedded in economic theory, popular culture and the media will be difficult. But economic theory reform, media reform, job sharing and changing human fertility behavior will be far easier than changing the inescapable laws of physics, expanding the land area of the earth, or doing business in cities inundated by rising sea levels. Difficult is still a lot easier than impossible.